The United Steelworkers announced Saturday that it has reached a tentative agreement with US Steel (USS) for a new three-year labor contract covering 18,000 workers across the United States. The USW released no details on the deal, but the circumstances under which it was reached guarantee that the steelmaking giant has achieved its demands.

“We are pleased that we have reached a tentative agreement in the best interest of our company, our stakeholders and our employees,” Mario Longhi, president and chief executive officer of Pittsburgh-based US Steel, said in a news release. “We believe this competitive three-year contract further supports the mutual success we have had with the USW.”

When the previous contract expired on September 1, the USW ordered workers at US Steel, along with another 12,000 steelworkers at ArcelorMittal (AM), to continue working without an agreement. The first result of this was the isolation of 2,200 workers who were locked out by specialty steelmaker Allegheny Technologies (ATI) on August 15. 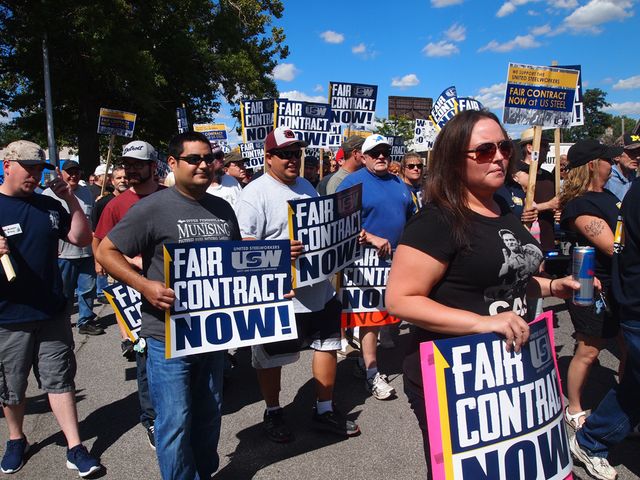 ATI coordinated its attack with the larger steelmakers and issued similar demands, including a two-tier wage and benefit system, higher health care costs, the elimination of employer-paid pensions for new hires and the transformation of the workforce into “on-call” employees. The USW has condemned ATI workers to isolation and starvation rations from its half-billion-dollar strike fund as a warning to USS and AM workers of what would happen if they walked out.

The USW also withheld the deal until the United Auto Workers reached agreements with the Big Three auto companies. With the UAW facing a near rebellion by 140,000 Fiat Chrysler, General Motors and Ford workers—and another 3,300 workers at Nexteer Automotive in Saginaw, Michigan—both unions were determined to prevent a unified fight by auto and steelworkers.

The USW and the UAW are both closely allied with the Obama administration, which has made the systematic lowering of manufacturing wages and the shifting of health care and pension costs onto the backs of workers the centerpiece of its economic strategy. USW President Leo Gerard sits on the president’s “jobs and competitiveness” board along with CEOs from several Fortune 500 companies.

Both the UAW and USW function as corporate syndicates, doing everything possible to suppress the class struggle. They fear that if any section of workers break through it would become the catalyst for a broader movement of the working class against stagnating wages.

The USW announced the deal in a brief statement on the union’s Facebook page Saturday, saying it “would be nearly impossible to summarize the details of such a broad agreement in an update like this, but over the coming days and weeks, we will be preparing detailed summaries of the proposed contract for you to review. We will then schedule meetings to discuss the proposal and consider ratification.”

This means that over the next several weeks the USW will escalate its campaign of lies and threats to ram through the deal.

The agreement, the USW claimed, represented a “major step forward” from the “relentless company demands for deep and permanent concessions.” Echoing the claims by the steel bosses, the USW said givebacks were necessary due to the downturn in global steel demand. It repeated the national chauvinism and corporatism that has long been its stock-in-trade, claiming that the crisis was caused not by capitalism, but the “flooding of steel” into “our market” by China and other countries.

Significantly, the statement continues, “We have been determined not to be forced to pay the full price for the problems of unfair trade and global overcapacity.” In other words, the USW is agreeable with workers paying 99 percent of the price!

Hostile to any genuine mobilization of steelworkers that would imperil its close relations with the steel corporations and the Obama administration, the USW statement concludes, “As we move forward, we intend to continue working as hard as possible to ensure that American steel is competing on a level playing field. U.S. Steel and other employers, as well as rank and file USW members, can all be important partners in that effort.”

The USW has long used such nationalist poison to divide US workers from their international brothers and sisters and demand endless concessions in the name of defending the profits and “competitiveness” of the US steel industry. In the meantime, the USW had cultivated the closest ties with Wall Street and became an active partner in the wave of mergers and industry downsizing that gut the jobs, living standards and pensions of workers. The corporations have poured large sums into the USW Health and Welfare Fund, which took over the provision and reduction of medical benefits to hundreds of thousands of retired steelworkers and their dependents.

The USW announced the deal with US Steel even as it forced 2,600 taconite miners employed by Cliffs Natural Resources, formerly Cleveland Cliffs, to continue working without a new contract. The labor agreement for the iron ore miners in Minnesota and Michigan expired on October 1.

The USW acknowledged that there was no agreement in the talks despite six months of supposed “bargaining” and that the company has rebuffed its repeated efforts to impose further cost-cutting measures on the steelworkers it claims to represent.

The USW has “offered the company a series of solutions that would reduce the fixed cost of making steel and reduce labor costs while maintaining our economic security, our standards of living and protect the health care benefits of both active and retired employees—including future retirees,” the USW said in a statement.

“Unfortunately, the company has ignored our good faith efforts and demanded concessions that far exceed their needs. Much of our discussions have centered on combining the Program of Insurance Benefits (PIB) for both active and retired employees.”

These proposals echo those advanced by the UAW, which was forced to drop its proposal for a union-controlled “health care co-op” because of widespread opposition from rank-and-file workers. Nevertheless, the UAW has pledged to work with the auto companies and the Obama administration to force workers to accept inferior care or accept steep increases in health care costs, while claiming the cost-cutting would have no impact on their benefits.

The US Steel-USW deal no doubt contains these onerous terms, and the USW will use it to pressure AM workers to accept the same.

The USW is forcing steelworkers to pay for the global economic crisis and a new restructuring of the international steel industry, which will cost tens of thousands of jobs. Workers, however, are not responsible for the crisis. It is the product of the anarchy of the capitalist system and the criminal actions of the financial aristocracy, which has enriched itself at the expense of the working class around the world. In this the ruling class has been aided and abetted by both big business parties.

In opposition to the USW demands that workers sacrifice everything and support trade war and ultimately world war for the control of markets and profits, steelworkers need to build new organizations, including rank-and-file factory committees, to advance their own strategy to defend the jobs and living standards of workers around the world.

This must be part of a fight to develop an industrial and political struggle to replace the bankrupt capitalist system with socialism, including the transformation of the global steel industry into a public utility, democratically run and collectively owned by the working class.