One worker was killed and another critically injured Saturday after a concrete wall collapsed at Ford’s Chicago Assembly Plant, the company’s oldest continually operating factory. The deceased worker was identified by the Cook County medical examiner as 45-year-old John J. Jaloway of Carol Stream, Illinois. This is at least the second fatality at Ford in a matter of weeks, following the death of a worker at the company’s Kansas City Assembly plant in the days before Christmas.

The incident at Ford’s plant on Chicago’s Far South Side occurred shortly before 11 a.m. Saturday, according to the Chicago Fire Department, when an eight-by-eight foot concrete wall that was under construction collapsed, trapping a contractor underneath. A 48-year-old autoworker who rushed over to help was himself injured when a section of the wall fell on his leg.

Danny Palumbo, another autoworker who was working nearby, described the incident in a post on Facebook: “I was less than 25 feet away when it happened, I worked with three other guys and we tried to lift that wall, but we couldn’t move it. We finally got twenty or maybe even thirty guys around it and lifted it maybe three inches and pulled the guy out.

“I can’t remember much else because the blood rushed to my head when we let the wall fall…I didn’t know the guy, but I am typing with tears in my eyes.”

The contractor was taken in grave condition to a nearby hospital, where he was later pronounced dead.

Ford’s Chicago plant first began operation in 1924, producing the Model T. While the company has spent hundreds of millions to install state-of-the-art robotics and other technology in recent years, many autoworkers have told WSWS reporters that the plant is a “hell,” with holes in the roof and walls, standing water, and vermin. The massive 2.8-million-square-foot facility has no air conditioning, and workers report regularly passing out from heat exhaustion in the summer.

After the incident Saturday, Ford issued a statement of insincere and worthless sympathy, saying, “We are saddened that a contractor was killed in a construction accident at the Ford Chicago Assembly Plant today and another worker was injured while trying to help after the initial accident. We offer our sincere condolences to his family, friends and colleagues. We are cooperating fully with the investigation.”

For their part, local officials for the United Auto Workers union responded on social media by exhorting workers to “be safe” and “pray,” while passing over in silence Ford’s record of criminal negligence towards safety.

In response, one worker commented sarcastically, “Good thing that we have the UAW looking out for workers’ safety! Before the UAW, a wall might have come down on some people and killed or injured them....”

Others denounced Ford and the abominable conditions at the plant. John L. wrote, “Let’s be honest all the walls on Torrence avenue are crumbling. Every 5 feet you can see through that wall somewhere. Ford motor company is hugely at fault. This is their band aid on a bullet wound model at its finest! It’s time our safety is taken seriously. Everywhere!”

The workplace deaths at the Chicago and Kansas City plants serve to further expose the UAW’s lie that workers and the auto companies share the same interests. The billions of dollars in investment promised by the Big Three if workers signed their contracts—which the UAW used to blackmail workers—is intended solely to increase productivity, speed up the line, and wring out even more profits from autoworkers, who meanwhile are being forced to labor in miserable and dangerous conditions resembling those of the early 20th century.

When workers are injured or killed, as in Chicago and Kansas City, the main concern of the UAW is to cover up the culpability of the company, and their own complicity, in sacrificing workers’ lives and limbs on the altar of profit.

The WSWS Autoworker Newsletter spoke at length Saturday with a worker from the Chicago Assembly Plant who had previously filed a complaint over conditions at the plant with the Occupational Safety and Health Administration (OSHA), the US government body nominally tasked with regulating workplace safety.

“In 2014, I filed a complaint with OSHA regarding the building structure. There were lots of things I saw that were unsafe for us to be working in. The building’s integrity is horrible. Saying it’s horrible is putting it too nicely. These are things that when you look at them, they’ve been deteriorating for decades.

“For example, when it rained hard, water would come in through the ceiling and pool in 40- to 50-foot puddles, almost looking ponds, to the point where you had to lift up the bottom of your pants. Workers had to put tons and tons of rags down to walk across them. Water will drip on electrical or computer equipment, too.

“I had also noticed a white substance coming from the ceiling directly below pipes that had asbestos warning labels. 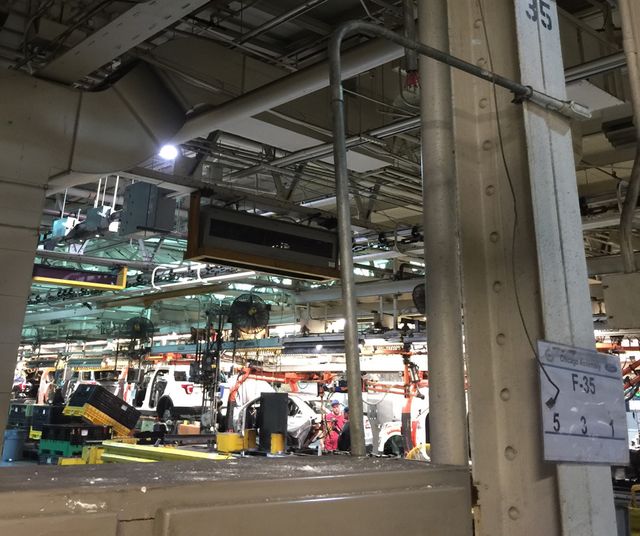 “I listed about 11 things in my complaint. A few weeks later, I got a letter from OSHA stating, ‘Due to limited resources, we will have to delay our investigation of Ford.’ Meanwhile, Ford went around and did minor fixes, like putting barrels under where the water was leaking, basically band-aids. On the same side of the plant where that wall collapsed, there were huge holes where raccoons could come if they wanted to. They ‘fixed’ that by just putting a big metal slab over it.

“So six months later, OSHA comes in and gives them no violations for anything. They said there was ‘no evidence to support the allegations.’ They have no regard for our safety.”

When told about UAW Local 551’s calls for workers to “be safe” and “pray,” he responded, “I would say that’s an insult to the people that work there and the families of the people who were hurt. They’ve ignored safety. When we find something that’s wrong, they look at you like you’re the problem.

“Their idea of a safety meeting is coming up while you’re on the job, making you sign a piece of paper and hurry up and get back to work. You don’t even have time to read what they’re giving you.

“Or they’ll shut down the line, and have an entire zone gather around a supervisor. The majority of the time, most individuals cannot hear what is being said, and questions are discouraged. At the end of this very quick run-through, all employees are made to sign a form, relieving the company of liability.

“If you go to medical, they belittle you and yell at you, and they try to make it taboo. They have scare tactics they use to try to prevent people from going there.

“Safety is not Ford’s priority. If they had had regard for safety a year ago, this could’ve been taken care of. How can you claim that safety is a priority, when they have these jobs figured out to the last second, and the only thing that matters is the speed you’re doing the job?

“Of course, I’m sure they’re going to try cover up the cause of the wall collapse. The only thing that’s a concern is getting the cars out, one after another. This is how bad things are at the company for the workers.

“And this speaks volumes about OSHA too. They had a complaint in their office last year and they did nothing about it, and now somebody’s dead.”