The struggle against war and the lessons of history

The International Youth and Students for Social Equality (IYSSE) group at Berlin’s Humboldt University held another very successful meeting last Wednesday. It was the fourth held by the IYSSE in the campaign for the student parliament elections.

Previous meetings had discussed the role of professors Herfried Münkler and Jorg Baberowski, and their support for a police state and war. The theme of the meeting on Wednesday was “The historical struggle of the socialist movement against war”. 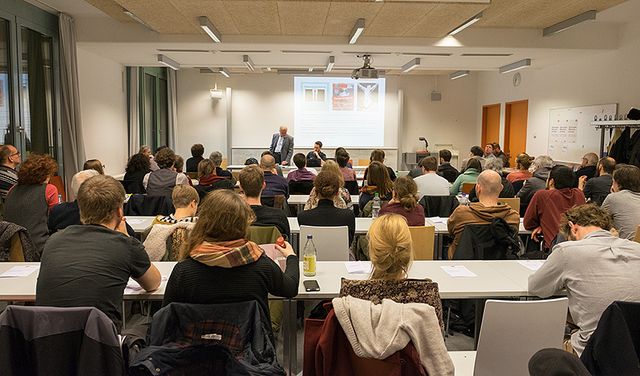 The IYSSE had invited the chairman of the Partei für Soziale Gleichheit (PSG, Socialist Equality Party) Ulrich Rippert, to speak. He began with the words, “The lessons of history, which we want to discuss tonight, have great relevance and urgency. We are currently witnessing a dramatic change in the political situation. The return of militarism and war, the participation of the Bundeswehr (Armed Forces) in the wars in Syria, Mali and again in Afghanistan are being pressed ahead with great energy and speed. Just like 100 years ago on the eve of the First World War, and at the beginning of World War II, this is connected with an unbridled propaganda campaign.”

Rippert then described how the media and the political parties have exaggerated and exploited the events of New Year’s Eve in Cologne to whip up a hysterical, racist campaign against immigrants and Muslims. “Seventy years after the collapse of the Third Reich, racial prejudice is again being used and shameless images of dark-skinned ‘subhumans’ grasping German women shown in the media,” he said, displaying three pictures to illustrate the similarity of today’s caricatures with those of the Nazis.

Title pages of the Süddeutsche Zeitung and Focus, and a Nazi cartoon

He stressed that this was not an expression of a general mood in the population, but rather was the result of a targeted campaign from above, from the ruling elite. It stands in direct relation to the developments towards war and it pursues several objectives, Rippert said. It serves to mobilise the most reactionary political forces and to legitimise German participation in the wars in the Middle East and in Africa. The call for more police, secret service agents and surveillance is aimed at the establishment of a police state.

In the course of his contribution, Rippert came back to this question several times. “The racist propaganda in the media and calls for more police and more troops are a foretaste of what is to come here,” he explained. He then described the racist campaign at the beginning of World War I, which at that time was directed against the “Russian subhumans”.

He quoted from a propaganda pamphlet from the First World War, presenting the “Russians as drunken, animal-like beings, dumb and clumsy, snub-nosed, mostly with fur hats and a bottle of vodka”. In a popular history book of the time can be found: “A ray of enlightenment or of civilisation never penetrated the mud huts of the serfs; he lived for raw sensuous pleasures, especially from liquor, as a result dull; in his animal existence, only terrified by the barbarous punishments of the landlord. ... “

Much like today, it was emphasised at the time that, as a “civilized nation”, Germany had the task of defending “Enlightenment values”, “German culture and civilisation” and the “values of democracy and freedom”. Under this strong ideological pressure, the Social Democratic Party, in which strong nationalist and opportunist trends had previously developed, collapsed. On August 4, 1914, the SPD had agreed to the Kaiser’s war credits in the Reichstag and supported the war.

Rippert described how the “struggle for the defence of German culture and civilisation” looked like then, with reference to the destruction of the Belgian town of Leuven by German troops in the first month of the war. Among other things, the world famous university library was destroyed, along with invaluable early writings.

Then he quoted the “Call to the civilised world”, on which many professors of the Friedrich-Wilhelms-Universität, as Humboldt University was then called, had worked. It ends with the words: “Without German militarism, German culture would long since have been eradicated from the earth ... the Deutsches Heer (German Army) and German people are one.”

Rippert continued: “Do you hear echoes of President Joachim Gauck, who emphasises at every opportunity that the Bundeswehr needs to be in the mainstream of society? More respect and more recognition must be given to the German army.”

At the end of his speech, Rippert spoke about the significance of the statement of the International Committee of the Fourth International, “ Socialism and the struggle against imperialist war “, which was adopted in summer 2014. It states:

“The two world wars of the 20th century arose out of the contradiction between global economy and the outmoded nation-state system. The globalisation of production over the past three decades, resulting in a further qualitative leap in the integration of the world economy, has brought the fundamental contradictions of capitalism to a new peak of intensity. … There can be no fight for socialism without a struggle against war and there can be no fight against war without a struggle for socialism.”

In conclusion, Sven Wurm, spokesman for the IYSSE university group at Humboldt University, addressed the meeting. He also spoke about the significance of the campaign against foreigners. The word foreigner was currently being used in the media mostly in conjunction with the word “criminal”, he said. Wurm reported that shortly before the meeting, Christian Democratic Union General Secretary Peter Tauber had made a speech in the Bundestag (parliament) in which he demanded that a thousand foreigners be deported every day.

Last year, a total of about 18,000 failed asylum seekers were deported, said Wurm. Tauber’s demand would mean doing this 20 times over. “This can only be described as mass deportations”, he declared, and added scornfully: “They can then bring back the cattle trucks, with which the Jews were transported to the extermination camps.”

Wurm stressed that the establishment of an international anti-war movement was directly linked to the political and theoretical struggle against the falsification of history, “which is being disseminated here at our university by Herfried Münkler and Jörg Baberowski”. This is why the construction of the IYSSE and its election to the student parliament are of such importance.

Following the two contributions, a lively discussion developed. There was a prolonged debate about the difference between a socialist and a pacifist opposition to war.

Both speeches had dealt with the issue of pacifism. Unlike Marxists, who distinguish between imperialist war and wars of liberation, and understand that the cause of imperialist wars lies in the objective contradictions of society, the pacifist regards violence and war from a purely subjective standpoint. Through appeals to reason and humanity, the pacifist tries to unite all peace-loving people. This is doomed to failure and, as a result, on the eve of war pacifists regularly sided with the militarists.

It was stressed in the discussion that the Green Party provided a good example of the transformation of pacifists into militarists. “They have evolved out of the peace movement of the 1980s and can hardly wait today to send the Bundeswehr on ever new and ever more comprehensive combat missions. The colour green previously stood for environmental protection. Today, it stands for uniform,” said one participant.

Many more questions about a socialist perspective in the fight against war could only be addressed briefly. The discussion on these issues will be continued at future meetings.

Several students took away fliers and posters to publicise the next meeting among their fellow students and friends and to promote the election of the IYSSE. The final election meeting, which will also be attended by international representatives of the IYSSE, takes place on Monday, January 18, at 6:30 p.m. in the university main building (Auditorium 2002).

The elections for the student parliament then take place on the following two days, January 19 and 20.