Directed by Michael Bay; written by Chuck Hogan, based on a book by Mitchell Zuckoff

American film director Michael Bay is responsible for Bad Boys, Armageddon, Pearl Harbor, and the Transformers films. Not known for his subtlety, Bay’s approach is generally bombastic with as many explosions and special effects thrown in as technologically possible.

His latest film, 13 Hours: The Secret Soldiers of Benghazi, about the 2012 attack on an American compound in Libya by Islamist militias that killed four Americans, including the US ambassador, is simply awful.

The casual reader may well ask, “So what did you expect?” And, “Why bother to review it?”

The point of the World Socialist Web Site arts review section is to critique official culture and examine wider trends in society, even if that means holding one’s nose on occasion and submitting to the worst of the commercial fare from Hollywood. Considering the trend of unabashed pro-American militarism in cinema in recent years (Zero Dark Thirty, Lone Survivor, American Sniper and more), it would be a mistake not to tell the truth about Bay’s 13 Hours.

13 Hours: The Secret Soldiers of Benghazi

Within the first few minutes of Bay’s film, the audience has already been lied to about the roots of the 2012 attack in Benghazi.

The filmmakers juxtapose the lynch-mob murder of Col. Muammar Gaddafi with titles that explain how the Libyan people rose up against an evil dictator and how the US and its allies fought to free the people, but then Islamist militias began fighting each other once the war was won…and so on.

In fact, after 2003, Washington was allied with Gaddafi and even used his country for CIA torture “black sites” to fight Islamist militias. After the Tunisian and Egyptian mass uprisings, the US government exploited popular hostility to the regime by arming these very same militias—now dubbed “freedom fighters”—to the teeth. Once Gaddafi was overthrown, in a war that saw NATO forces kill tens of thousands, the militias descended into tribal-based warfare, at one point creating two rival governments in Libya. Chaos and violence have ensued, treated for the most part in respectful silence by the media that previously howled about the danger of a “massacre” in Benghazi.

One of the most secular societies in the Middle East and North Africa has been torn apart by US imperialism with the aim of plundering the country’s oil and mineral wealth. In all likelihood, the CIA compound and “diplomatic outpost” in Benghazi was a major weapons conduit for smuggling arms and fighters into Syria to overthrow the Assad regime. Every indication suggests that the September 11, 2012, attack was a case of “blowback,” in which the US government reaped the whirlwind for courting (and arming) terrorists they once opposed.

None of this is remotely hinted at in 13 Hours. That would be a different and better kind of movie. Indeed, the Libyans in the film—if represented at all—are simply non-people. No motive is given as to why they would possibly hate the Americans. They are mowed down like weeds. Instead, the focus is on the “brave” Americans who defended the ambassador and State Department flunkies against the monstrous Arabs. 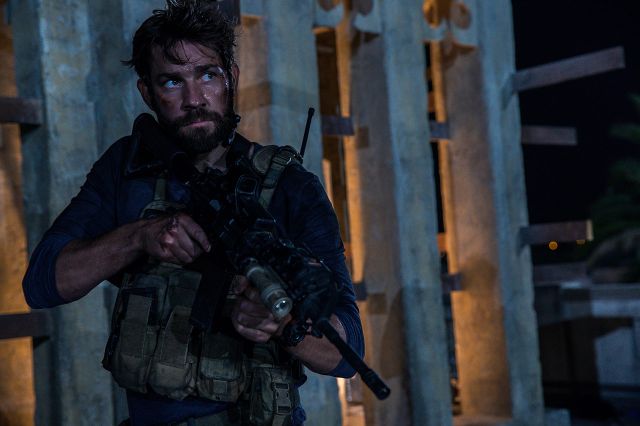 The characterizations in the film are minimal and threadbare. We meet Jack Da Silva (John Krasinski), who we learn is a CIA security contractor, a euphemism for mercenary, with a pretty wife and adorable children back home. From a McDonald’s drive-thru, with kids in tow, she tells her husband over the phone that she is expecting a baby. The scene, meant to be pull at our heartstrings, is so poorly directed that is actually comic.

The other five or so contractors are also pretty much devoid of personality. In this film, the Americans are largely non-people, too. One of the US mercenaries quotes from Joseph Campbell’s The Power of Myth in between playing on his Xbox. When they are not slaughtering the locals, our heroes spend much of their time lifting weights and acting macho.

The entire film and its publicity campaign resemble a video game. Make no mistake—13 Hours is aimed at susceptible kids fresh out of high school who can be snatched up by the military. The film’s simplistic plot borrows from the Fox News version of the Benghazi events: there were not enough US forces to guard the compound in 2012 thanks to back-stabbing officials in Washington (i.e., Hillary Clinton and Barack Obama).

In keeping with the outlook of the paranoid right wing, Bay’s film turns reality on its head. Here, US imperialism, the greatest perpetrator of violence in the world, is under siege, with its hands tied behind its back by bureaucratic red tape and cowardly civilian officials. If only “our boys” could get the support they really needed! There is more than a whiff of fascism in this.

In one of the movie’s pivotal scenes, CIA station chief “Bob” (David Costabile) tells our muscle-bound champions to “stand down” from defending the ambassador’s compound until they can figure out what is going on. According to the real-life CIA station chief, however, no such order was given. Moreover, the Republican-led committee investigating the Benghazi events concluded in November 2014 that there was “no evidence that there was either a stand down order or a denial of available air support.”

Bay’s “poetic license” contrasts the wavering civilian leadership with the indomitable mercenaries. “Bob” tells the crew that “there’s no real threat here,” dismissing the seemingly lax security at the ambassador’s compound. When the secret soldiers, or the Global Response Staff, as they like to be called, tour the facility, they are told by the State Department’s Bureau of Diplomatic Security that “Uncle Sam’s on a budget now” and they cannot request more men and weapons.

As a result of all this negligence (if not outright perfidy), our main characters and the audience itself have to endure a tedious version of the Battle of the Alamo. Even the action scenes, Bay’s supposed trademark, feel pointless for the most part. The many jump cuts in the editing are enough to cause a headache, and this reviewer was seated in the back row.

Bay is not the only guilty party here, or even the primary one. He had help on this project from powerful friends. Elements in the military-intelligence apparatus no doubt had their hand in its coming into being. 13 Hours was not premiered in Los Angeles or New York, but in Arlington, Texas, at AT&T Stadium, home of professional football’s Dallas Cowboys.

Paramount Vice Chairman Rob Moore told the Hollywood Reporter, “Movies that honor the military, like Lone Survivor, definitely do better in Texas, Arizona and Nevada than in San Francisco and New York. This film has those same elements of military heroism—elements that appeal to a conservative audience.”

The studio placed an advertisement on Fox News for 13 Hours following Obama’s State of the Union address. Fox also broadcast a special hosted by Megyn Kelly, in which, according to the network, “three of the heroes,” Mark “Oz” Geist, Kris “Tanto” Paronto and John “Tig” Tiegen, “reflected on the 2012 attack and reacted to Michael Bay’s much-anticipated film.” 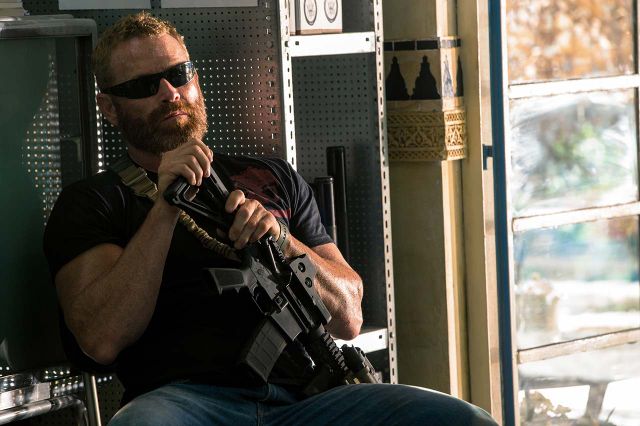 13 Hours: The Secret Soldiers of Benghazi

Despite the publicity campaign, 13 Hours has not done as well as hoped. It had the lowest box office opening of any of Bay’s films, and reviews were almost universally bad. That is an encouraging sign. Deadline Hollywood commented that the film was “drawing more noise from the CIA, Republicans and Democrats than moviegoers.”

Wonderfully, Paramount’s Moore then turned around and blamed the population for the less-than-resounding success: “It feels like it was hard for people to buy a ticket if they were more liberal leaning. It’s sad that this gets turned into a political debate as opposed to a conversation about who did the right thing and who was heroic.” He now complained that fewer people than expected went to see 13 Hours because it was “politicized”—after his studio did everything in its power to pander to the extreme right.

What was lead actor John Krasinski (The Office, Away We Go, Promised Land), a talented performer, even doing in this piece of rubbish? He chimed in along the same lines as Moore, telling the Daily Beast, “I am actually slightly disgusted at the idea that applauding our military has become a political thing rather than universal. … I would never say we shouldn’t talk politically about stuff—as long as step one is acknowledging these guys and what they went through that night.”

Fortunately, worship of the military is not “universal.” What is truly disgusting is that Libya no longer exists as a functioning society thanks to the very people that the makers of 13 Hours and others tell us to honor.