The visit by Democratic presidential candidate Hillary Clinton to Flint, Michigan on Sunday was an effort at damage control aimed at covering up the criminal role of the Democratic Party in the lead poisoning disaster and cynically using the tragedy confronting residents to boost her own campaign. 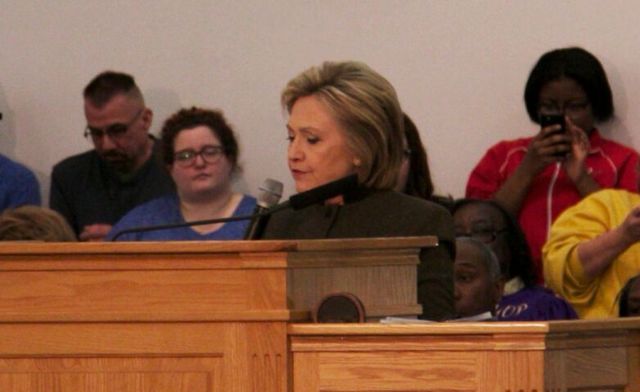 Speaking at the House of Prayer Missionary Baptist Church, which has a mostly black congregation, on the North side of Flint, Clinton sought to gloss over the culpability of local and state Democratic party officials in the Flint water crisis, while strongly implying that the poisoning of Flint residents was a racial, not a class issue.

Despite her professions of outrage, Clinton only raised the issue of lead poisoning after it became an issue in the US and global press in January. Her visit to Flint, only days before the New Hampshire primary, where polls have her trailing US Senator Bernie Sanders, is a transparent attempt to shore up her flagging poll numbers by using local residents as a backdrop.

The stopover in Flint was little more than a photo-op. After a 15-minute speech the Democratic candidate was hustled out of the city along with her sizeable press and Secret Service entourage.

In her remarks Clinton touted a paltry $200 million in federal aid proposed for the city of Flint via legislation sponsored by Congressional Democrats. This is $400 million less than the inadequate $600 million in federal emergency relief proposed earlier by Democrats in an amendment to an energy bill pending before Congress. Conservative estimates of the cost of replacing Flint’s antiquated lead pipes range up to $1.5 billion. This does not include a price tag on the incalculable cost to the health of Flint residents, whose children have been permanently scarred by exposure to lead-tainted water.

Clinton’s proposal is slightly more than the reported $153 million in speaking fees she and former president Bill Clinton have pocketed since leaving the White House in 2001.

Underscoring the unserious nature of Clinton’s professions of sympathy for Flint residents, the Democratic aid proposal does not even match the $1 billion spending package to replace lead pipes in Flint advanced by Republican Congresswoman Candice Miller.

Viewed from another perspective, the amount of aid Clinton cited for Flint is little more than the cost of a single F-35 fighter jet. The policy of both Clinton and Obama is clear: unlimited funds when it comes to bombing Iraq and Syria, but no money to address the life-or-death social ills facing working people.

Speaking at a black church, Clinton declared, “if what was happening in Flint had been happening in” the mostly white Detroit suburbs of “Grosse Pointe or Bloomfield Hills, we all know we would have had a solution yesterday.”

The attempt to portray the crisis in Flint as a racial issue is absurd, given the fact that nearly half the population of Flint is white. Meanwhile the majority of the largely-Democratic local elected and appointed officials who presided over the disaster are African-American.

While the Republican administration of Governor Rick Snyder and Democrats attempt to shift blame for the crisis, Flint residents continue to confront elevated levels of lead in their drinking water. To date, not a single lead pipe in the working class city of 100,000 has been replaced in the aftermath of the crisis.

The response of the Obama administration to the Flint crisis recalls the notorious indifference shown by the George Bush administration in the wake of the devastation caused by Hurricane Katrina. In the aftermath of the storm that killed 1,800, Bush, abetted by the Democrats, rejected any serious efforts to rebuild devastated New Orleans and Gulf Coast cities, leaving the area to rot.

Now, in the wake of Flint, a man-made disaster, the response of all levels of government is essentially the same. The message of Clinton was unmistakable: residents of Flint are on their own.

This was expressed in Clinton’s praise of inmates at the Ionia state prison who volunteered to donate one-third of their meager $10 monthly stipend to aid the citizens of Flint. Instead of a multibillion federal public works effort to rebuild Flint’s infrastructure, Clinton touts donations from prisoners.

Her only other concrete proposal to help Flint was to send AmeriCorps volunteers to the city. This is a slap in the face to Flint parents, whose children will need, not untrained volunteers, but rather highly qualified professionals to deal with the debilitating effects of lead poisoning.

Clinton absurdly attempted to portray Michigan Democrats as champions of the people of Flint. She declared, “I thank the elected officials who are here and I appreciate greatly the work they are doing at the city, the county and the federal level. I had the opportunity to be with your friend [Senator] Debbie Stabenow who is working hard with your friends Senator Gary Peters and the Congressmen Kildee, Levin and others who are trying to get support and help from the federal government.” She recited the names of the Michigan Democratic Congressional delegation in the same breath as that of professor Marc Edwards of Virginia Tech, who was one of the first to expose lead in the water of Flint, and Dr. Mona Hanna-Attisha, the pediatrician who raised the alarm about the lead poisoning of Flint children.

While Edwards and Hanna-Attisha showed genuine perseverance and courage, Michigan Democrats can make no such claim. The emergency manager of Flint, Darnell Earley, who oversaw the switch of the water supply of Flint from Detroit to the polluted Flint river, was a Democrat, as was the mayor of Flint at the time. Indeed, the Flint mayor and Democratic city council toasted the criminal decision to send highly corrosive Flint River water into the homes of the city’s residents.

As for the Michigan Democratic Congressional delegation, including US Representative from Flint Dan Kildee, no one paid heed to the complaints of Flint residents until after the exposure by Marc Edwards.

Just as criminal as the role of the Snyder administration were the actions of Obama-appointed officials in the federal Environmental Protection Agency (EPA). The top EPA official for Michigan, Susan Hedman, silenced a lower-ranking employee who tried to raise warnings about lead in Flint’s drinking water. Instead Hedman colluded with state officials to keep reports of elevated lead levels from the public for months, until Edwards’ research exploded the cover-up.

Over the past several decades there has been a vast transfer of wealth from the working class to the richest 1 percent or one-tenth of 1 percent of society. General Motors extracted massive profits off the backs of the working class in Flint before largely abandoning the city in the 1980s, leaving a legacy of toxic wastes and poverty.

The Obama administration, which Hillary Clinton served for four years as Secretary of State, has accelerated the growth of social inequality through bank bailouts and cuts to social spending.