Democratic presidential candidate Bernie Sanders spoke to an overflow crowd of mostly youthful supporters at Eastern Michigan University (EMU) in Ypsilanti on Monday. It was Sanders’ first campaign stop in Michigan ahead of the state’s March 8 primary election.

The EMU Convocation Center, site of the rally, was filled close to its 10,000-person capacity. When the doors opened at 12:30 there was already a long line of people waiting outside, even though the Vermont senator was not set to speak until 2:30. The turnout seemed to take even Sanders supporters by surprise.

The crowd included large numbers of students and young professionals, but few workers. It was evident, however, that bitter experience had alienated wide layers of the population from the official nostrums about the superiority of the market and the free enterprise system. During Sanders’ speech, more than half of the audience raised their hands when the Vermont senator asked who was burdened with student loan debt.

Opening the rally, a representative of the Michigan Nurses Association announced that organization’s endorsement of Sanders, calling the US health system “broken beyond repair.”

Sanders took the podium next, speaking for close to an hour. He began by discussing the lead poisoning crisis in Flint. While repeating his call for the resignation of Republican Governor Rick Snyder, Sanders said nothing about the role of local Democratic officials in approving the decision to switch the city’s water supply to the polluted Flint River. Nor did he mention the complicity of Obama administration officials in the Environmental Protection Agency, who covered up the lead poisoning of Flint residents for months. He went on to call for the federal government “to get in and do the right thing” in Flint, without offering any specific proposals. 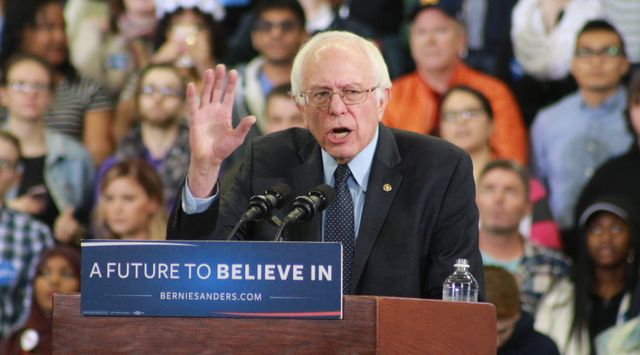 Democrats in Congress and the Obama administration are proposing a completely inadequate aid package of $600 million for Flint. Conservative estimates put the cost of replacing Flint’s antiquated lead piping at $1.5 billion. This does not count the cost of caring for Flint’s children, who have suffered irreversible neurological damage, not to mention the cost of replacing lead pipes in other cities across the United States.

In addition to raising issues related to social inequality, Sanders devoted a substantial portion of his speech to various identity questions. He dwelt at some length on issues relating to discrimination against African Americans, gays, immigrants and women. But, like his campaign rival Hilary Clinton, he sought to separate these questions from the more fundamental issues of class and the capitalist system. Even in raising the question of social inequality, Sanders never referred to the working class, speaking instead of the fate of the declining “middle class.” 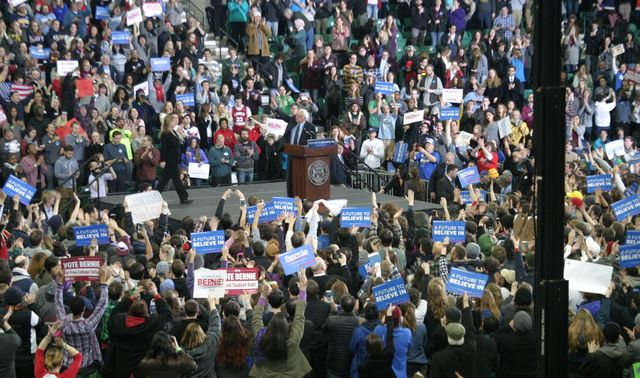 Sanders made a direct pitch for the support of the unions based on an appeal to economic nationalism and American chauvinism. “We must stop the loss of millions of good-paying jobs because of disastrous trade policies,” he declared. He denounced the Trans Pacific Partnership and declared, “Corporate America has got to start investing in this country, not just China.”

As a defender of capitalism, Sanders appeals to nationalist sentiments to cut across the strivings of workers to unite their struggles against the transnational corporations across national boundaries. His nationalist poison is the exact opposite of a socialist program, which takes as its starting point the famous Marxist slogan, “Workers of the world unite.”

The hollowness of Sanders’ denunciations of social inequality and his program of modest social reforms was reflected in his refusal to criticize the policies of the Obama administration. While repeatedly pointing to the spread of various social evils, from crumbling infrastructure to collapsing schools, he failed to point out the obvious fact that all of this has grown worse under a Democratic administration.

Obama has presided over a massive transfer of wealth from the working class to the top one percent. Sanders’ silence on this record demonstrates that his campaign does not represent the interests of the working class. It is, rather, the response of the ruling elite to the political radicalization of broad social layers and the danger of the emergence of an independent movement of the working class. Sanders’ so-called “political revolution” is an attempt to abort this development and corral social opposition back into the death grip of the two-party system.

This is underscored by Sanders’ support for the ongoing US interventions in Iraq and Syria and Washington’s aggressive policies toward Russia and China. Sanders generally tries to evade these issues in his stump speeches. In his EMU speech, his only reference to the question of war was a reiteration of his vote 14 years ago against the invasion of Iraq.