Rallies were convened in major Australian cities last Saturday, supposedly to protest against the Liberal-National Coalition government’s proposed multi-million dollar cuts to Medicare rebates. In reality, the events provided platforms for the trade unions and pseudo-left groups to promote the return of Labor and the Greens at the federal election due this year, despite their own record of slashing health spending when Labor was last in office, backed by the Greens.

Last December, as part of its mid-year budget cuts, the Coalition government declared it would save $650 million over the next four years by reducing or removing access to bulk-billing (services provided without upfront patient fees) for pathology tests, diagnostic imaging and Magnetic Resonance Imaging (MRI) scans, plus another $595 million by scrapping a number of health workforce programs.

The cuts will have a severe impact on working class and vulnerable patients. Doctors have warned, for example, that 1.7 million diabetes sufferers could each be forced to pay $400 a year for blood and urine tests to monitor heart and kidney disease, women would have to pay $30 for regular Pap smear tests, and patients could be charged up to $56 for X-rays. Poorer patients will inevitably delay or avoid costly testing, preventing timely diagnoses and giving rise to more serious diseases and complications. 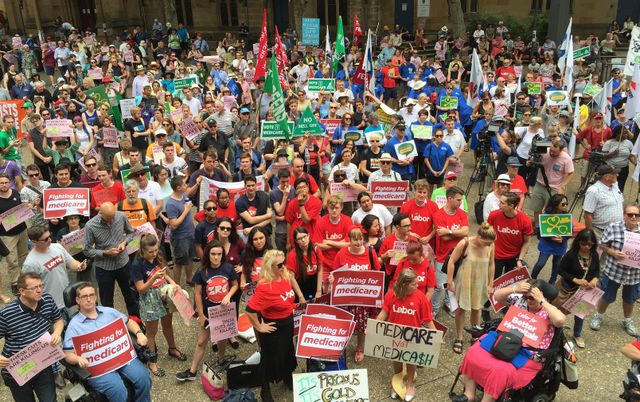 A section of the protest in Sydney

At the Sydney rally, Labor leader Bill Shorten was the main speaker, greeted with cheers by the predominantly union and pseudo-left crowd. Shorten postured cynically as a defender of Medicare, describing it as a “community standard for Australian health care.” Just over a year ago, in December 2014, Shorten backed the government in freezing doctors’ rebates for four years—a move to force all doctors to charge upfront fees.

Moreover, Shorten was a key minister in the previous minority Labor government as it reduced public hospital funding in 2012–13. That was on top of Labor’s introduction of “casemix” funding, which continuously drives down government payments for hospital procedures, causing blowouts in surgery waiting times and placing increasing strain on medical staff.

Shorten was welcomed to the stage by Amy Thomas from “These Cuts Are Killing Us,” who chaired the event. Thomas is a member of Solidarity, a pseudo-left organisation.

During Shorten’s brief address, some participants began chanting, “Let them stay”—a reference to Labor’s support for the removal of refugees to Nauru and Manus Island, where Labor reopened brutal detention camps in 2012. Members of Socialist Alternative, another pseudo-left group, were prominent in the chanting.

But not one of the speakers at the rally mentioned Labor’s record of cutting health spending.

New South Wales Nurses and Midwives Association assistant general secretary Judith Kiejda painted Australia’s health care system as a model of “efficiency.” Australia had “by any international measure, including the OECD, a most efficient health system,” she said. A Medicare card was a “ticket to access quality health care regardless of their capacity to pay.”

In reality, the public health care system has been chronically underfunded for decades at the hands of Labor and Coalition governments alike. According to the Australian Medical Association’s latest annual public hospitals report card, last year no state or territory achieved the national access target of seeing emergency patients within four hours.

Covering up Labor’s role, Kiejda claimed the Medicare rebate cuts were simply the result of “ideological fervour” by the Coalition and could be reversed by a small “Robin Hood tax” on global financial transactions. 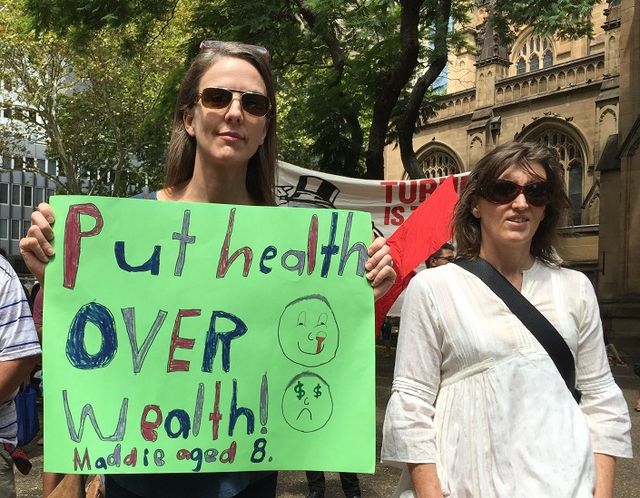 Another nurses’ union representative, Kerry Rodgers, who was introduced as a “union activist,” repeated Kiejda’s claims that Australia has a “world-class health care system.” Rodgers argued for funding primary care (pathology tests, diagnostic imaging etc.) not because it was socially necessary, but because it was “the cheapest” and “most cost effective” and kept people out of the “expensive” hospital system.

Thomas introduced Greens Senator Lee Rhiannon, saying the Greens “have stood up for health care,” despite the Greens’ role in propping up the last Labor government. Rhiannon blatantly linked the rally to the federal election, saying: “The next election is about booting out [Prime Minister] Malcolm Turnbull, that’s the start to saving Medicare.”

Rhiannon made populist calls for higher taxes on big business and the mining sector, without any explanation of how such measures could be implemented within the existing capitalist profit system. Significantly, she praised US Democrat presidential contender Bernie Sanders for standing “on a very clear platform of a publically funded universal health care system.”

While falsely presenting himself as a socialist, Sanders is proposing limited reforms based on European systems that are themselves being dismantled by austerity measures. He is standing as a candidate in order to corral the seething discontent among workers and young people in the US behind the Democrats, a big business party. 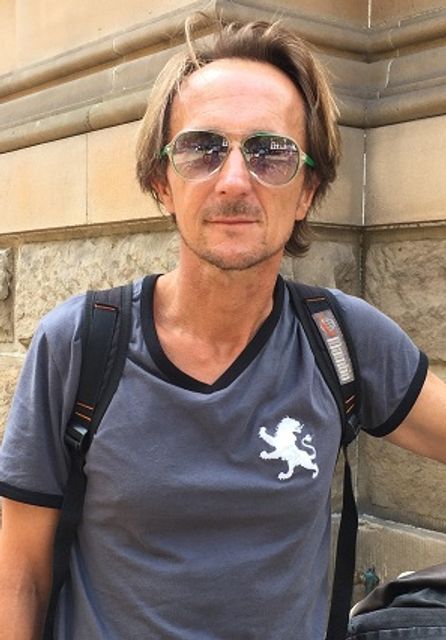 At the Sydney rally, Philippe, a high school teacher, explained to the WSWS why he had attended the event. “I believe to preserve Medicare is important, as a first step,” he said. “Hopefully it will build up into a bigger movement... I oppose any modification to Medicare. If anything, we should have more funding for Medicare. And that means maybe taxing the rich. I think they can pay, they can contribute.”

The teacher pointed to parallel processes in education. “School fees are increasing. School education is a big cost to society, but it’s one that is worth it. It is worth it to have an education, and [to be] well educated. [It is] not just getting people educated to successfully pass NAPLAN.”

A woman told the WSWS she could not afford to pay upfront fees for diagnostic medical tests. “How can we afford to pay for them?” she asked. “My father was recently diagnosed with prostate cancer. My mother just had her thyroid removed and she has been going for blood tests twice a week… They’re both on pensions, so if there was a cut and we have to fork out for those blood tests, and we have seven kids to fund, we are going to go into poverty.”