More than one hundred people attended a meeting on the Karegnondi Water Authority (KWA) in Flint, Michigan on Thursday evening. The key presentation at the meeting was given by Jeffrey Wright, the CEO of the KWA and the Drain Commissioner for Genesee County. He titled his talk, with an unintended irony, “Dawn of a new era in water supply.”

The KWA and Wright are at the center of the current Flint water disaster. Wright was the key KWA promoter, pushing the city and regional officials to join the new water authority as an alternative to continuing to purchase water and sewage services from the Detroit system. The decision was made in 2013. Though it was known that the KWA system would not be operational until 2016, Flint broke with the Detroit authority and, in 2014, began withdrawing the corrosive water from the Flint River, which leached lead from the city’s aging lead pipe infrastructure and poisoned residents. The change of water is also implicated in the outbreaks of Legionnaire’s Disease that have taken ten lives since the switchover. 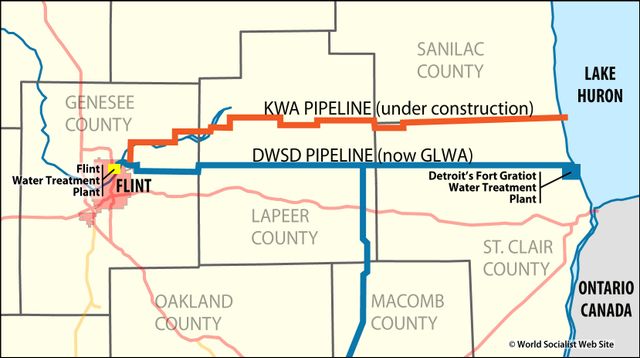 Map showing the DWSD and the KWA pipelines

The meeting amounted to little more than damage control for the KWA project as it continues constructing the pipeline from Lake Huron—parallel to and just six miles to the North of the existing Detroit-run pipeline.

The picture that emerges from the meeting and the most immediately available documents is one in which officials of both political parties, motivated by the prospect of rewarding deals with major corporations, and promoting the mantra that money spent on public interests like clean drinking water is an unaffordable impediment to business and economic development, ran roughshod over concerns about public health and safety.

The decision that Flint switch from the decades-long arrangement with Detroit to provide potable Lake Huron water treated at the Detroit-run facility near Port Huron, Michigan, to sign on with the KWA, which, when completed, would provide only raw, i.e., untreated water to the city, begs the question: how would the water be treated? Flint’s water treatment plant had stood virtually unused for almost 50 years. The plant itself was archaic—over 100 years old.

When the KWA pipeline is completed—supposedly late this year—the question of the treatment plant will still remain.

At pains to demonstrate that the decision to create the new water authority was motivated only by a desire to “improve reliability,” and secondarily for “reasons of cost,” Wright traced the origins of the KWA to discussions at the city and county level in 1999. He claims to have personally opposed the idea of another water authority prior to his election as Drain Commissioner in 2001.

He argued that he and other officials were forced to revisit the issue after the massive power outage that impacted much of the northeastern United States in 2003. The lesson of this experience, Wright argued, was that “Worse than tainted water is no water at all.” This was the sum total of the discussion about reliability, and given its absurdity—the KWA would likewise have been without power and unable to provide water, had it existed at the time—the presentation shifted to the question of cost.

Wright claimed Flint and Genesee County were paying $11 per thousand cubic feet (MCF) of water in 2002 and had seen the price rise to $31/MCF in 2013. This tripling of the price had meant an increase in cost from less than $10 million annually to more than $30 million, and it was projected to increase to $50 million within the next decade. Wright presented charts that projected an exponential increase in the cost of water from the Detroit system, compared with projected small decreases in the price that the KWA would charge. This widening gap would amount to a difference of $600 million over the next several decades. The labels on the charts were too small to be legible to the audience, and the speaker said that they would be made available the next day on the organization’s website. As of this writing, the slides have not been posted, and a follow-up inquiry in writing has yet to be answered by the KWA.

Wright claimed that the creation of the new water authority would lead to job growth across the county, and he pointed to the fact that the pipe had been fabricated on the site of General Motors’ former Buick City plant, which closed in 1999. A number of slides pointed to the potential growth of agribusiness in the area, depending on the supply of water that could be brought to it.

Wright did not indicate which commercial operations had discussed such possibilities with his office. A January 2016 report prepared for the KWA by business consultancy Bonner Advisory Group, however, points out that many agricultural and energy companies use vast amounts of water and proceeds to rank the sub-sectors of each category by water usage. Clearly there are major commercial interests involved.

Near the end of his presentation, Wright claimed that he wanted to clear up the “myths” and “misconceptions” surrounding the relationship of the new water authority and the unfolding of the current disaster in Flint. Among the supposed myths was the idea that the KWA or Wright personally had pushed the city to begin drawing water from the Flint River. Wright argued on Thursday that he had opposed such a decision and had a transcript of a meeting of the Flint City Council at which he had spoken against the move. (Neither the date nor the transcript were provided to the audience). He argued that he had no authority to approve or prevent the city from adopting this decision.

This claim is not easily reconciled with a January 15, 2015 memo from the Flint Department of Public Works to city residents. The memo addressed the question of who approved the use of the Flint River, and states:

“On June 29th 2013, following many preliminary discussions on how the City would fill the interim gap, a formal, all day meeting was held at the Flint Water Plant with all interested parties including City of Flint Officials (COF), representatives from the Genesee County Drain Commissioners Office (GCDC), the Michigan Department of Environmental Quality (DEQ), and the design engineers from the previous plant upgrade Lockwood, Andrews, and Newnam (LAN).” [emphasis added]

As to the feasibility of treating the water from the Flint River, the memo reports the outcome of the meeting to be the determination that “the Flint River would be more difficult to treat but is viable as a source” and that modifications to the plant that would treat the water could be made by April 2014 (the month during which the supply was actually switched).

It is a fact that Genesee County, where Wright did have authority, opted to remain in the Detroit system until the completion of the KWA pipeline. Because the county purchased its Detroit water indirectly, as a customer of Flint, this apparently required some physical alterations in the overall setup. As part of this process, Wright oversaw the purchase of a nine-mile length section of existing water pipeline in 2014 for $3.9 million, a deal that was negotiated for the city by its then-Emergency Manager Darnell Earley.

Both Wright and Earley are longtime Democratic Party officials.

The audience at Thursday’s event was largely friendly to Wright, applauding when he finished his presentation. It was hard to avoid the suspicion that the event was organized specifically to prevent the participation of Flint’s working class residents. Held at the Sloan Museum, advance registration, providing name and address, was required. The museum’s website indicated shortly after the event was announced that all seats were taken, only to reverse this announcement soon after.

There were several security guards outside and others inside during the event. Two area residents who attended shared their opinion with the WSWS that the organizers had attempted to keep many residents of the city of Flint from attending. On the other hand, a number of local officials were in attendance and were seen in friendly conversation with a section of the audience.

There were a number of skeptical questions and several pointed contradictions of the speaker, however. When Wright tried to claim that the Flint River was cleaner than it had been in decades and essentially fine for human consumption with proper municipal treatment, he was interrupted by an angry audience member who referred to research done by private environmental groups which found contaminants other than lead and copper in the river. The questioner also pointed to the contradiction between Wright’s own remarks that the river sediment contained heavy metal pollutants and yet was potentially safe to drink.

Another audience member asked if petroleum fracking operations had actually been the driving force behind the creation of the KWA. Wright’s stated opposition to fracking aside, he claimed that the KWA could not sell water to private entities but only to cities and municipalities. He did not attempt to reconcile this point with reports from as early as 2011 that DTE Energy had an interest in purchasing three million gallons per day of untreated water from the proposed KWA.

A speaker from the floor also reminded the audience that Wright had agreed to cooperate with the FBI by wearing a wire in the bribery case of Sam Riddle, a convicted extortionist whose services were contracted by Wright in the acquisition of the permits needed for the KWA project. Riddle served as the assistant to Detroit City Council President Monica Conyers, who also served prison time for bribery in 2010. According to the Detroit Free Press, Wright has refused to say what motivated his cooperation with the FBI, but former Genesee County Prosecutor Arthur Busch stated publicly that Wright would have been charged for money laundering over his election campaign for drain commissioner, except for statute of limitations issues. He chose not to respond to the issue at Thursday’s event.