Temps and contractors accounted for all US job growth since 2005

All US job growth for the last decade came in “alternative work arrangements”—people working as independent contractors, temps, through contract agencies or on-call—according to a study published Tuesday by Princeton University and the RAND Corporation.

The proportion of the workforce in such contingent arrangements rose sharply from 10.1 percent in 2005 to 15.8 percent in 2015. That means that nearly one in six full-time workers was in a contingent status, usually without job security, health benefits, vacations and other paid time off. Many contract workers are not even paid for legal public holidays. 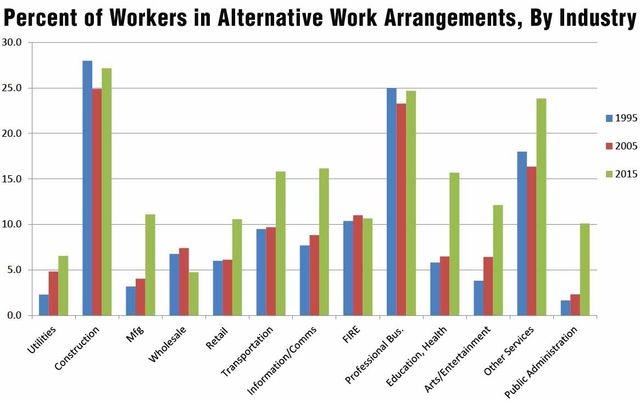 Source: Authors calculations based on Bureau of Labor Statistics CWS 1995 and 2005 and Rand-Princeton CWS 2015.

The actual number of contingent full-time workers rose from 14.2 million in February 2005 to 23.6 million in November 2015, an increase of 9.4 million. Since total US employment rose by 9.1 million during this period, the number of workers in conventional, full-time positions actually dropped by nearly 400,000. Neither figure includes part-time employment, which has likewise become far more widespread over the past decade.

As the study’s authors emphasize, “A striking implication of these estimates is that all of the net employment growth in the U.S. economy from 2005 to 2015 appears to have occurred in alternative work arrangements.” They add, with some understatement, “It appears that as of late 2015, the labor market had not yet fully recovered from the huge loss of traditional jobs from the Great Recession.”

According to the Princeton report, all four categories of nonstandard work increased from 2005 to 2015, with independent contractors remaining the largest group, at 8.9 percent of all workers, but the proportion of workers in the other three categories more than doubling, from 3.2 percent in 2005 to 7.3 percent. Contract workers—those employed by a contracting agency that supplies them to the company where they actually work—quintupled, from 0.6 percent of workers in 2005 to 3.1 percent in 2015.

The study found significant changes in both the occupational and demographic characteristics of the contingent workforce. In 1995 and 2005 surveys by the Bureau of Labor Statistics, construction and office services were the two largest employers of contingent workers, each accounting for about one-fifth of the total.

In 2015, however, in the wake of the collapse of home construction following the subprime mortgage debacle, construction jobs had fallen to only 7 percent of the contingent work force. In its place, education and health care had become the largest single employer, accounting for 21.9 percent. This coincides with a dramatic decline in the social position of education workers, with mass layoffs of teachers and other school employees.

According to the study, “Occupational groups experiencing particularly large increases in the nonstandard work from 2005 to 2015 include computer and mathematical, community and social services, education, health care, legal, protective services, personal care, and transportation jobs.”

The age structure of the contingent workforce has shifted as well, and not in the way that might be expected from conventional media coverage of the economy. Only 6.4 percent of young workers, aged 16 to 24, were employed in alternative work arrangements in 2015, about the same as in 2005. This reflects the reality that the super-exploitation of the vast majority of young workers is done through part-time working rather than contingent forms of full-time working.

One additional figure is particularly startling: the proportion of contingent workers holding multiple jobs. This figure has more than quadrupled over the past 10 years, from 7.3 percent in 2005 to a staggering 32 percent in 2015. This demonstrates the nearly unbearable stress affecting this section of the working class: in addition to a full-time job with no benefits or job security, one-third are working at another part-time or full-time job to make ends meet.

These bare figures provide a better picture of the economic and social reality of working-class life in America in 2016 than all the self-congratulatory speeches of Obama administration officials, or the puffery of their media apologists, hailing the US “economic recovery” that supposedly began in 2009.

This recovery has been a bonanza for the wealthy and the Wall Street moneymen, but the social position of the working class has been steadily eroded under Obama. This is not an incidental byproduct, but the deliberate aim and goal of administration policy, beginning with the auto industry bailout, based on slashing the wages of new hires by 50 percent.

Doing the bidding of Corporate America, the Obama administration pushed through a health care “reform” program to cut costs for business and the government. A major aspect of the Affordable Care Act was to offer the pretense of health care coverage for the rapidly growing army of contingent workers unable to obtain insurance through the traditional employer-based system.

As the New York Times noted Thursday in a commentary on the Princeton report, the shift to nontraditional employment “has profound implications on social insurance. More so than in many advanced countries, employers in the United States carry a lot of the burden of protecting their workers from the things that can go wrong in life. They frequently provide health insurance, and paid medical leave for employees who become ill. They pay for workers’ compensation insurance for people who are injured on the job, and unemployment insurance benefits for those who are laid off. They help fund their workers’ existence after retirement, at one time through pensions, now more commonly through 401(k) plans.”

By and large, contractors, temporary workers, and those hired through contract agencies have no access to these benefits and must bear all the costs of social insurance themselves. For the vast majority, this simply means doing without. Under the measures of the Affordable Care Act, they would be required to purchase insurance from private companies or face a fine.

The study, titled, “The Rise and Nature of Alternative Work Arrangements in the United States, 1995-2015,” was conducted by Lawrence Katz of Harvard and Alan Krueger of Princeton, and involved a survey of more than 6,000 workers last November.

RAND Corporation underwrote the survey as a replacement for the Contingent Worker Surveys that were conducted by the Bureau of Labor Statistics in 1995 and 2005. The survey was discontinued under the Bush administration, which sought to reduce the amount of information available on the conditions of working class life. While justified on right-wing ideological grounds—ending “unnecessary” government spending—the real goal was to conceal the savage impact of the actions of giant corporations in cutting jobs, wages and benefits.