Tens of thousands of impoverished, unemployed adults were cut off food stamps Friday, the first wave of a social catastrophe that could affect more than one million people this year.

Some 22 states began terminating benefits for “Able-Bodied Adults Without Dependents,” or ABAWDs, in the jargon of the US Department of Agriculture, which administers the federally funded food stamp program, or Supplementary Nutrition Assistance Program (SNAP), as it is formally known. 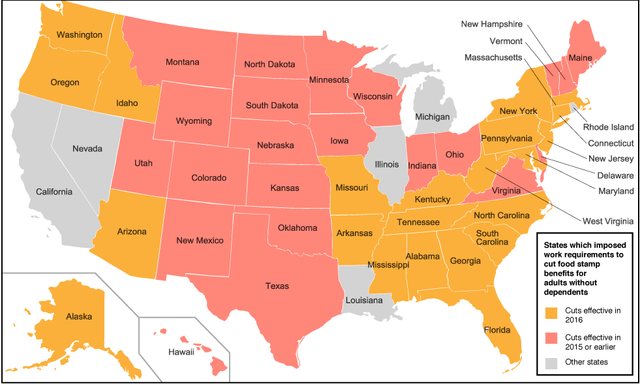 These adults, aged 18 to 49 years and without children, are generally the poorest section of the working class, earning only 17 percent of the official poverty rate, an average of barely $150-170 per month in income. But they are eligible for only 90 days of food stamp benefits unless they have paid employment or job training for at least 80 hours in a month. The 90-day clock began running January 1, so adults who no longer qualify under this rule began being terminated in state after state April 1.

The work requirements for food stamp recipients were waived for most states during the deep recession that followed the 2008 financial crash. States had to have an official unemployment rate above 10 percent, or at least 20 percent above the national average, or demonstrate a weak labor market under other criteria set down by the Department of Labor.

The harsh “work for food” requirements were first introduced for food stamps under the Personal Responsibility and Work Opportunity Act of 1996. This is the notorious “welfare reform” bill sponsored by then-US Rep. John Kasich, who is now Ohio’s governor and a Republican candidate for president, and signed into law by President Bill Clinton, husband of the current frontrunner for the Democratic presidential nomination.

It is particularly noticeable that none of the presidential candidates of either capitalist party, including the self-proclaimed “democratic socialist” Bernie Sanders, has made an issue of the food stamp cutoff that is plunging hundreds of thousands overnight into hunger and destitution.

Senator Sanders and former Secretary of State Hillary Clinton are in the midst of a campaign in the April 19 New York primary, but neither has said a word on behalf of the more than 50,000 New Yorkers who began losing their food stamp benefits Friday.

On Tuesday, Bill Clinton will campaign for his wife in Erie County, which includes the city of Buffalo, devastated by the collapse of the steel industry. Some 2,800 Erie County residents were cut off food stamps April 1, but it is unlikely that the former president, who has raked in more than $100 million in income since he left the White House, will have anything to say about it.

Hillary Clinton gloried in the “welfare reform” legislation in her 2003 memoir Living History (for which she was paid $8 million). She wrote that Aid to Families with Dependent Children, the program the bill abolished, “had helped to create generations of welfare-dependent Americans … I strongly argued that we had to change the system, although my endorsement of welfare reform came at some personal cost.” The “cost,” of course, was to her political credibility as a supposed advocate of the poor.

Clinton claimed that the legislation her husband signed “was a critical first step to reforming our nation’s welfare system. I agreed that he should sign it and worked hard to round up votes for its passage—though he and the legislation were roundly criticized by some liberals, advocacy groups for immigrants and most people who worked with the welfare system.”

Sanders has criticized Hillary Clinton repeatedly for giving speeches to Wall Street audiences in return for six-figure fees, as well as raking in campaign contributions from the financial and fossil fuel industries. But he has not sought to make a connection between Clinton’s close ties to the super-rich and the record of the first Clinton administration, particularly its attack on the poorest sections of the working class.

Nor has Sanders, in general, made an issue of the cuts in vital social programs, particularly those implemented with the collaboration of the Obama administration, like the $8.7 billion cut in food stamp benefits pushed through in 2014 as part of a bipartisan deal with congressional Republicans, or this year’s drastic cutback in food stamp eligibility for childless adults.

Food stamp recipients, and particularly childless adults on food stamps, have become targets of abuse for big business politicians of both parties. Several of the states now implementing work requirements have gone well beyond the regulations set down by the federal Department of Agriculture or the provisions of the welfare reform law.

State governments are permitted to seek exemptions from benefit cutoffs for regions of the state with particularly high concentrations of unemployment, even if the state as a whole no longer qualifies. In New York state, for example, the boroughs of Brooklyn, Queens and the Bronx have such exemptions, although Manhattan does not.

But many states, like Florida, have refused to seek such exemptions. The Missouri legislature even passed a bill last year prohibiting the state government from seeking a waiver, with legislators claiming it was easy for the unemployed to find at least 20 hours work per week.

In Mississippi, with one of the highest unemployment rates and highest poverty rates in the country, Republican Governor Phil Bryant chose not to extend the waiver of the work requirement. “We want people to go to work in Mississippi,” he said in a statement. “We want these individuals to get a good job and live the American dream, not just be dependent on the federal government.”