The paintings of Eugène Delacroix at London’s National Gallery

Delacroix and the Rise of Modern Art at the National Gallery of London, with the cooperation of the Minneapolis Institute of Art until May 22, 2016.

The stated intention of the organisers of “Delacroix and the Rise of Modern Art” at the National Gallery in London is to give visitors “the opportunity to (re)discover” the “revolutionary artist” Eugène Delacroix (1798-1863).

Their claim that he “embodied the idea of the great art rebel” and “defied the stifling authority and convention of the art establishment” is borne out by his assured 1837 self-portrait. 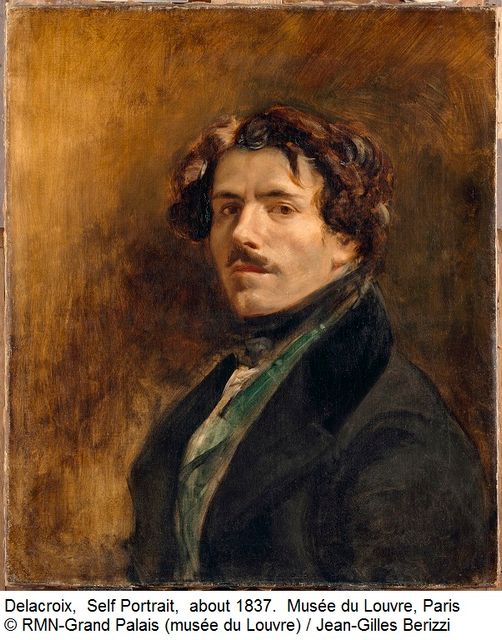 Delacroix is presented as “one of the first modern masters,” an idea often argued in the art world, and an inspiration to the Impressionist and Post-Impressionist movements. Henri Fantin-Latour’s “Homage to Delacroix” painted in 1864, one year after his death, is the first picture in the exhibition and shows the next generation gathered together to pay Delacroix the honour that had eluded him for so long––including Edouard Manet, James Whistler and Delacroix’s greatest admirer, the poet and art critic Charles Baudelaire. 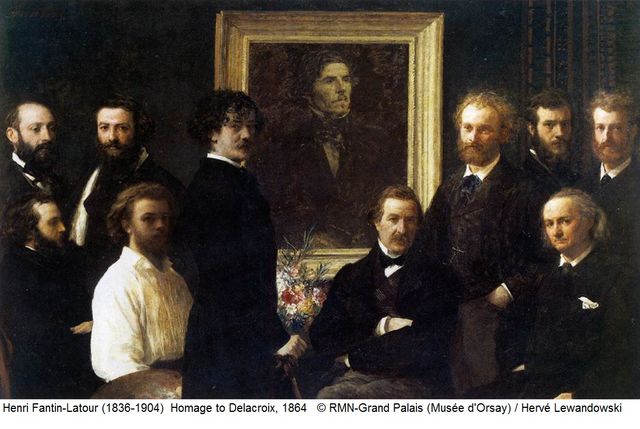 The exhibition consists of six themed rooms including landscapes, still lifes, religious images and Orientalism, in which Delacroix’s paintings, about a third of the total, are compared with other artists. Although his murals and large paintings are absent, the smaller ones present give a flavour of Delacroix’s trailblazing portrayal of human emotions and his use of colour and hazy imagery. He insisted that a painting should be a “feast for the eyes” that allows the viewer to “finish” it themselves in their own imagination. He detested the “petty details” and “cold exactitude” of some of his contemporaries which he said resulted in “boring” art.

The exhibition shows how some of Delacroix’s contemporaries idolised (Redon), studied (Van Gogh), copied (Manet and Renoir) or painted pictures about him (Cezanne). However, by concentrating on style and technique the National Gallery show downplays the significance of his art and the social and political context of the period. Unfortunately, visitors will leave the exhibition without a real sense of the tumultuous times he lived in—the aftermath of the French Revolution (1789-1799), the explosive growth of capitalism and the working class and the emergence of the Romantic movement of which he was the greatest exponent in painting.

Eugène was born in 1798, the youngest son of Charles Delacroix, an active participant in the French Revolution, a signatory to King Louis XVI’s death warrant and Minister of Foreign Affairs in the revolutionary government. There is strong evidence that Maurice Talleyrand, Napoleon’s chief diplomat, was Eugène’s biological father and looked out for him when he was orphaned at the age of 16.

Delacroix was trained in the Neoclassical style of Jacques-Louis David (1748-1825), the artist most closely identified with the revolution. After the revolution, when the goal of state power had been reached, the French bourgeoisie lost its enthusiasm for the depiction of the republican heroes of ancient Greece and Rome.

As the Russian Marxist Plekhanov explained, “When the bourgeoisie assumed the predominant position in society, and when its life was no longer warmed by the fire of the struggle for liberty, nothing was left for the new art but to idealise negation of the bourgeois mode of life. Romantic art was indeed such an idealisation. The romanticists strove to express their negation of bourgeois ‘moderation and conformity’ not only in their artistic works, but even in their own external appearance.”

For this bohemian milieu, “art for art’s sake” became the watchword rather than art for utilitarian purposes. Reason and science gave way to passion and a longing for the lost unity of man and nature. Baudelaire called for “the absolute autonomy of art” and recognised in Delacroix “a poet in painting” who could capture “the atmosphere of the human drama and the state of the creator’s soul.”

Romanticism was a complex development. Marx and Engels were careful to distinguish between revolutionary romanticism, which rejected the misery, vulgarity and corruption of bourgeois existence and looked to the future, and those reactionary romanticists who desired a return to a pre-capitalist social system and idealized the Middle Ages.

The contradictory nature of Romanticism is expressed in Marx’s words as reported by his daughter Eleanor: “The true difference between [poets Lord] Byron and [Percy] Shelley consists in this, that those who understand and love them consider it fortunate that Byron died in his thirty-sixth year, for he would have become a reactionary bourgeois had he lived longer; conversely, they regret Shelley’s death at the age of twenty-nine, because he was a revolutionary through and through and would consistently have stood with the vanguard of socialism.” 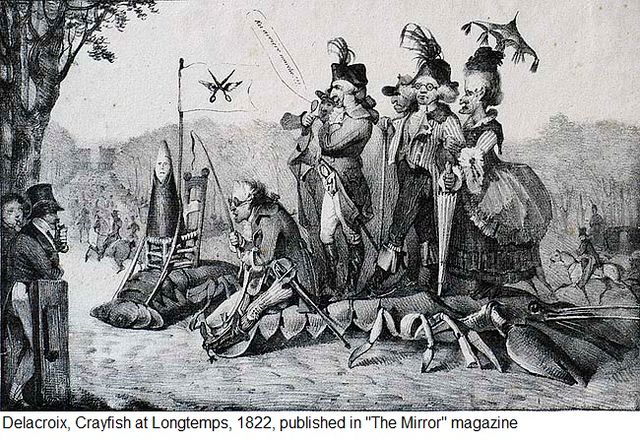 Delacroix’s earliest work (not in the exhibition) consists of political cartoons parodying press censorship under the Bourbon monarchy, which was restored in 1814 following Napoleon’s downfall. “Crayfish at Longchamps,” published in 1822 in the “The Mirror” magazine before it was forced to shut down, shows members of the ruling elite perched on a crayfish, symbolising reaction because of the way the animal swims backward, protected by the chief censor and his flag showing the censor’s scissors. In the background, crowds stream towards an unfinished Arc de Triomphe, a memorial to those who had died in the Revolution and Napoleonic wars. 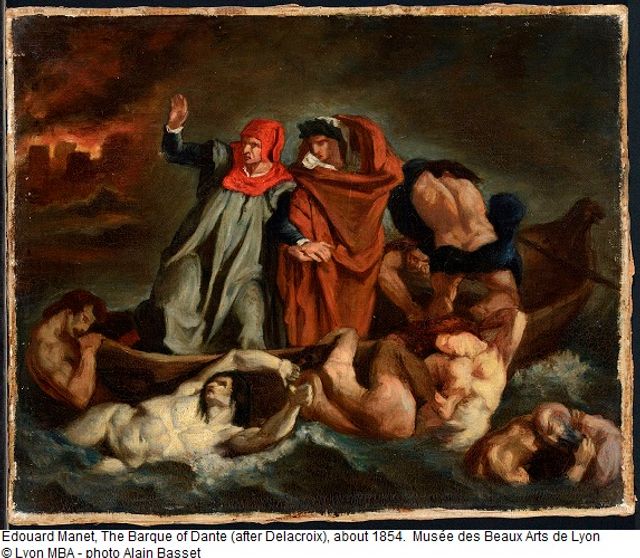 Delacroix produced no further cartoons after 1822—the year he submitted his first painting, the controversial “Barque of Dante,” to the Paris Salon. Manet’s exact copy from 1854 appears in the exhibition. The action and poses of Dante and his companion, Virgil, as they attempt the terrifying crossing from Hell represents a transition from Neoclassicism to Romanticism.

During the 1820s Delacroix turned to painting, but retained his liberal sentiments as shown in his pictures supporting the Greek war of independence from Turkey including “Massacre at Chios” (1824) and “Greece Expiring on the Ruins of Missolonghi” (1826). The subject matter—the struggle against tyrannical rule—and the graphic depiction of suffering was condemned as inappropriate by critics. 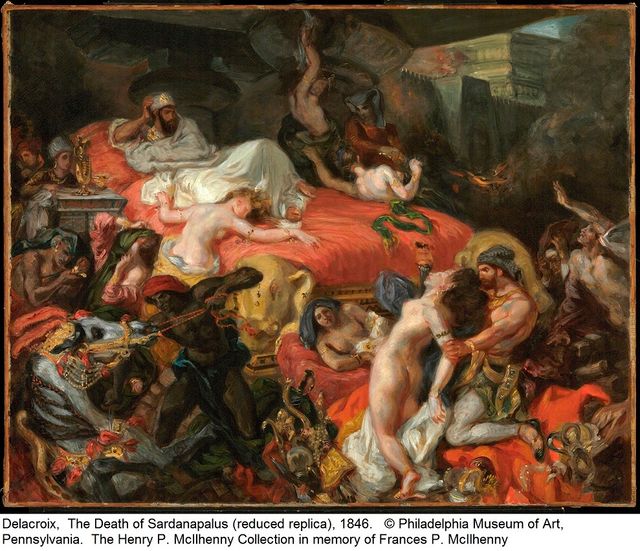 In 1827 Delacroix’s submission to the Salon, “The Death of Sardanapalus,” was more controversial than the “Barque of Dante”. The painting, of which a smaller later replica is displayed, was inspired by Byron’s 1821 play telling the tale of Assyrian king, Sardanapalus, who was deposed by courtiers opposed to his pursuit of peace and merciful rule. Rather than let the rebels succeed, he orders the destruction of all his possessions including his concubines. Though the painting uses a neoclassical storyline, Delacroix exploits composition and colour in an entirely innovative way. 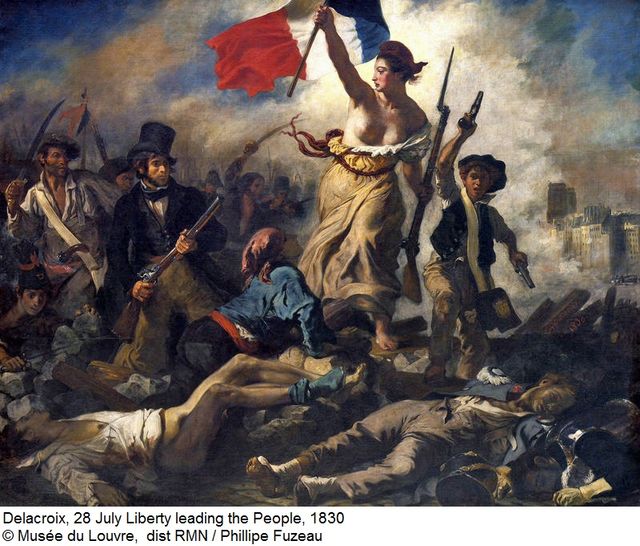 “Liberty Leading the People” was produced in 1830. There is virtually no mention of it at the National Gallery, although it is probably his most famous paintings. Its depiction of an actual event, the 1830 revolution against Charles X, and glorification of the struggle for liberty was so inflammatory that it was removed from public view until after the 1848 revolution.

In 1832, Delacroix travelled to Spain and North Africa as part of a diplomatic mission to Morocco shortly after the French conquest of Algeria. There he believed he had found a “living antiquity” in the culture of the Arab and Jewish communities, remarking, “The heroes of David and Co, with their rose pink limbs, would cut a sorry figure beside these children of the sun, who wear the dress of classical antiquity with a nobler air.”

“In many ways they are closer to nature than we—their clothes, for instance, and the shape of their shoes. Hence there is beauty in everything they do. But we, with our corsets, narrow shoes and tubular clothing, are lamentable objects. We have gained science at the cost of grace,” he noted in his journal. 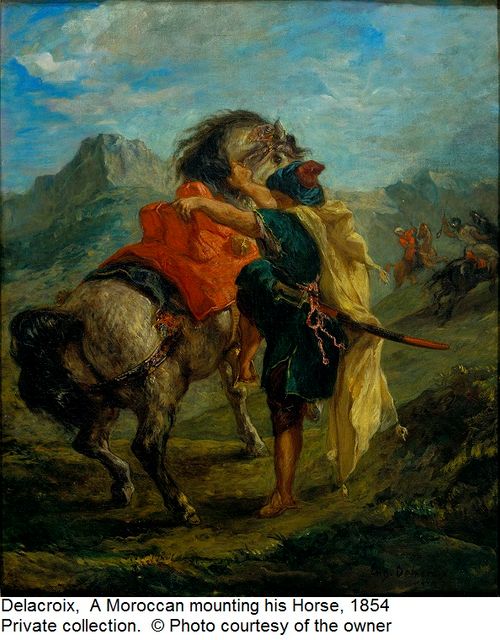 The exhibition displays some of the many powerful Orientalist images he painted over succeeding years based on his African experiences, including an ecstatic religious procession, horses and their riders (“A Moroccan Mounts his Horse”) and domestic life. Renoir, in 1875, was to paint an almost exact copy of “The Jewish Wedding in Morocco” and decades later Picasso produced 15 variants of “Women of Algiers in their Apartment.” 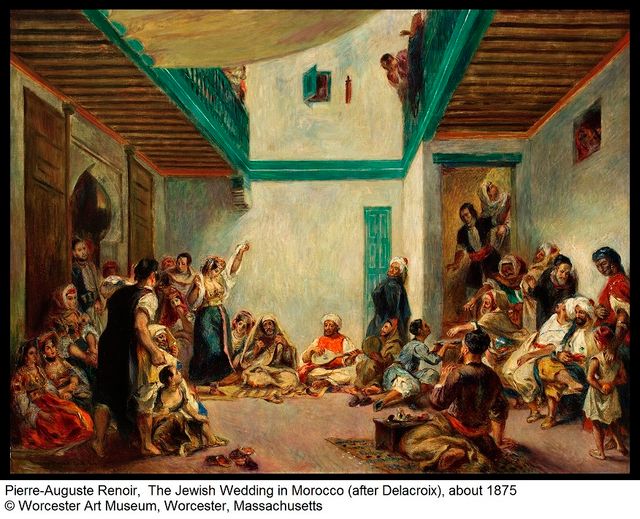 After 1833, Delacroix was commissioned to decorate several public buildings and churches in Paris, which are described in a video screening at the exhibition. The ceilings of the Bourbon Palace (seat of the French National Assembly) depict the rise and fall of civilisation from Orpheus teaching the arts to the ancient Greeks to their destruction by Attila the Hun.

The wave of revolutions in 1848 did not provoke an artistic response from Delacroix along the lines of “Liberty leading the People.” His journal entry of April 23, 1849 records an essentially demoralised view about progress:

“Leaving the well-trodden path inevitably means a return to the infancy of society, and after a succession of reforms, a state of savagery must necessarily be the result of the changes.”

Instead Delacroix set about painting the last religious murals in Western art at Saint Sulpice church, including “Jacob Wrestling the Angel”––an allegory for Delacroix’s own artistic struggles and agnostic beliefs. 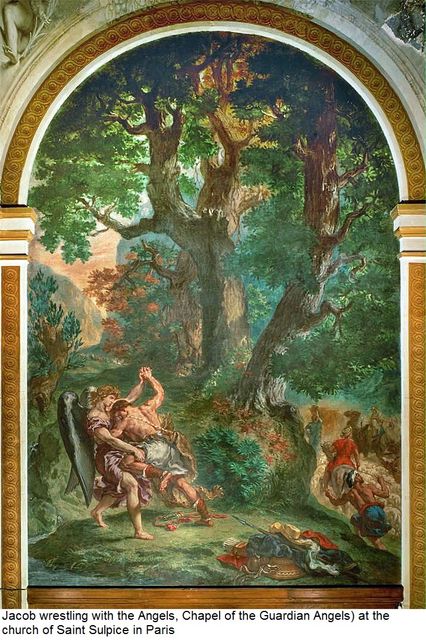 It was not until 1857 that Delacroix, after nine unsuccessful attempts, was finally elected to the French Academy. By then the spirit of protest and rebellion had passed to others. The Realist movement had responded to the 1848 events and the emergence of a new social force—the working class—by rejecting Romanticism and its “art for arts’ sake” approach and producing bold social statements.

After visiting an exhibition of the work of Gustave Courbet in 1853, Delacroix observed, “I was astonished by the vigour and the relief of his vast picture; but what a painting! What a subject! The commonness of the forms would not matter; it is the commonness and uselessness of the thought which are abominable…”