On Monday afternoon, a van carrying strikebreakers hit a Verizon worker picketing in front of City View Inn on Greenpoint Ave. in Long Island City, a neighborhood in New York City’s borough of Queens. Emergency Medical Technicians arrived at the scene and took the striker to a hospital. As of this writing, the worker’s condition is unknown. 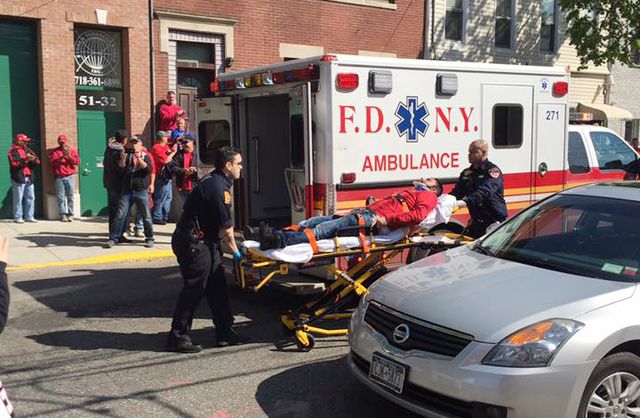 According to comments posted by strikers on social media, the van was driven by a uniformed member of the New York Police Department (NYPD). Strikers were taking part in a protest organized by the Communications Workers of America (CWA) at hotels where strikebreakers are quartered, when police opened up a path for the van as it sped through the police barricade and struck a parked car with a striker inside.

One eyewitness reported, “As the caravan of police driven scab mobiles left, one van hit a parked car and a CWA 1109 member. The officer driving the van did not stop and took off.” Verizon workers are outraged at the scab herding by the NYPD. Some have demanded to know why the officer drove the wrong way down a one-way street or if he was arrested for injuring the striker.

The scabs were reportedly employed by a contractor used by Verizon in the state of Kentucky, according to strikers. A video of the aftermath of the incident showed angry strikers confronting the cops. One worker who identified himself as a former marine, told the police “they had no right to use their authority” to attack striking workers.

The police violence is a damning indictment of the Democratic Party and Mayor Bill de Blasio, who oversee the strikebreaking operations of the NYPD and have herded strikers into pens surrounded by metal police barricades in the same manner that protesters against war and inequality have been corralled for years in New York City.

The fact is the Democratic Party is providing Verizon with an army of NYPD police to escort scabs, spy on workers and to prepare, if the struggle were to break free from the control of the CWA, even greater police violence and mass arrests. This exposes the fraudulence of the supposed support for Verizon workers from Democratic politicians, including Hillary Clinton and Bernie Sanders, who held photo-ops with strikers during last month’s New York primaries.

It also underscores the anti-working class character of the union’s alliance with the Democratic Party, which no less than the Republicans serves the interest of giant corporations like Verizon. 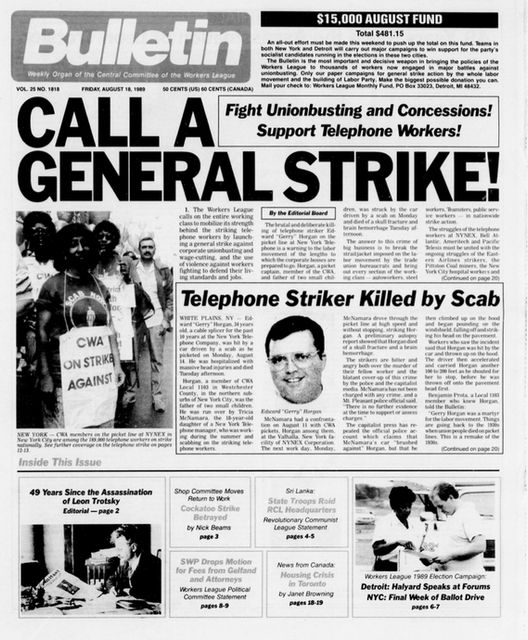 The incident in Long Island City is a chilling reminder of the August 14, 1989 murder of Edward “Gerry” Horgan, who was run down by a scab during the four-month strike against NYNEX. The 34-year-old father of two died of head injuries after a car, driven by the daughter of a manager, drove through the picket line in Westchester County, New York at high speed. The CWA and the AFL-CIO never campaigned for the perpetrator to be prosecuted and no charges were ever brought.

Verizon, a massive global telecommunications corporation with tens of billions of dollars in assets, provoked the strike by demanding concessions in health care from workers and retirees, the right to transfer workers up to 100 miles away from their current job locations, and the right to force them to work at any location the company chooses for up to two months.

With the first month of the strike nearing completion, the world’s second-largest telecom company is escalating its effort to force workers to accept these conditions. The company prepared for the strike for months and has trained over 20,000 managers and contractors to do the work of the strikers.

The strike has been systematically isolated by the CWA, the International Brotherhood of Electrical Workers (IBEW) and other unions, which are in the process of wearing workers down with impotent protests while blocking any genuine mobilization of the massive and discontented working class on the East Coast of the United States. The unions have already offered hundreds of millions in concessions.

Under a back-to-work agreement signed by the CWA after it sold out the 2011 strike, workers are severely restricted in their ability to defend their jobs from scabs and even to express their opinions. The memorandum with Verizon signed by the CWA allows workers on a picket line to be fired for “hate speech” directed at scabs.

The supposed “progressive Democrat” Mayor Bill de Blasio appointed Police Commissioner William Bratton, who has defended NYPD spying and the militarization of the force with armored vehicles and sound cannons. The Democratic-controlled City Council voted last year to arm and fund 1,000 police officers, 300 of whom would belong to a heavily armed “antiterrorism” unit that Bratton said would be used against protesters. During the 2011 strike, such units were used against Verizon strikers after the company accused them of “sabotage.”

The escalation of the government-backed attack on Verizon workers must be answered by mobilizing the widest possible support from workers and young people facing the same struggles throughout New York. This can be done only if rank-and-file workers elect their own strike committees, independent of the CWA and other unions, and in opposition to the big-business Democratic Party.