“A lot of those being laid off won’t come back”

Workers at the Fiat Chrysler Sterling Heights Assembly Plant (SHAP) north of Detroit expressed anger and uncertainty over their fate, with the final elimination of a full shift of 1,300 workers at the facility last week. The job cuts are the first permanent layoffs by Fiat Chrysler since it emerged from bankruptcy in 2009.

SHAP workers contacted by the World Socialist Web Site said the company and the United Auto Workers (UAW) were telling them very little about their future. Even before the official date of the layoff workers were being reassigned to other Fiat Chrysler plants in the area, often without regard to plant-wide seniority.

Fiat Chrysler set a July 5 date for the termination of the second shift at the facility, which builds the slow-selling Chrysler 200 mid-size sedan. The company has said it plans to end production of the vehicle in the United States and perhaps outsource its manufacture to a third-party supplier. Another 120 related jobs are scheduled to go at the nearby Sterling Stamping plant.

Workers at SHAP have faced periodic temporary layoffs since the beginning of the year due to poor sales of the Chrysler 200. Sales of the vehicle are down 58 percent from the same period last year.

By phasing out smaller car production Fiat Chrysler is betting everything on continuing strong sales of its larger, less fuel-efficient vehicles. That presupposes that gas prices will continue at their current relatively low level.

SHAP will reportedly be closed later this year and retooled to build the Dodge Ram pickup truck, with production starting sometime in the summer of 2017. The Ram is currently built at the nearby Warren Truck Assembly Plant. That plant is slated to start production of the low-volume Jeep Wagoneer, which means their jobs and perhaps the entire plant—one of the oldest owned by FCA—may be imperiled. 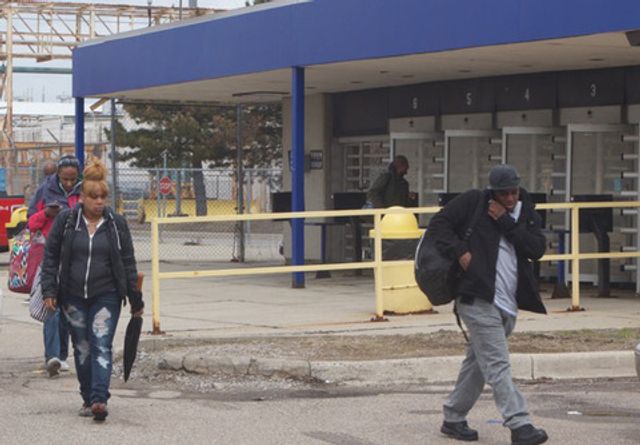 Meanwhile, the Jeep SUV currently built at the Belvidere, Illinois assembly plant will be built in Toluca, Mexico. Fiat Chrysler has said it also plans to phase out production of the Dodge Dart, another small size vehicle, at the Belvidere plant. The plan is then to start production there of the Jeep Cherokee.

Out of all this shifting of production Fiat Chrysler CEO Sergio Marchionne claims there will be no net loss of jobs. However, Kim, a veteran tier one SHAP worker, told the WSWS Autoworker Newsletter, “What they are trying to do is downsize by merging different plants. Jefferson (Jefferson North Assembly in Detroit) will end up down to two shifts. A lot of those being laid off won’t come back. It all seems like a strategy to me.”

SHAP workers contacted by the newsletter said both the UAW and management were stonewalling them about their employment status. In addition, some workers indicated difficulties in receiving unemployment benefits.

A second tier worker with three years at SHAP said, “You don’t really know where you are going. Lower seniority workers are getting placed first.” Under terms of the UAW contract agreement workers earning the second tier earn less money than veteran workers and currently take eight years to reach top pay.

She said it was difficult surviving on unemployment benefits, which, even with supplemental benefits paid by the company under terms of the UAW agreement, are well below normal base pay.

“We are only getting about 75 percent of what we normally get with sub pay and unemployment benefits. I think we have only worked three months so far this year. It is hard on everyone. It is very stressful, especially for the tier-two workers.

“It doesn’t make any sense for me to try to stay at SHAP because the plant will only be in operation a few more weeks before they shut down in December until the Ram comes in.

“Everyone is getting letters in the mail. Once you are sent to a new plant you have to work there at least six months. You have to put in a request if you want to come back to your home plant.

“You either try to bump someone out of first shift or you put your name in a labor market pool.

“You have the choice of requesting to be sent to a plant inside your labor market, but the Detroit labor market includes Toledo, so you could be sent there, which is more than 60 miles from Detroit.”

Kim added, “The UAW doesn’t tell you anything. You have to find out through rumors. That is because I think they don’t know themselves; all they do is go along with the management program.

“People are really getting fed up with it. The employees are not as uneducated as they think. They know when they are being misled.”

Amy, another tier-two worker with three years seniority, said, “I know of seven people who came in June 2015, after me, who are working at Warren Truck and I am still laid off. That is not sitting well with me. My last day of work was June 17. Next week will be one month on layoff.

“When you call human resources no one wants to talk to you and the union doesn’t return your call.

“You can’t survive at all. It is not fair that people under me in terms of seniority have been placed and I am not working. It is to management’s benefit to do it that way because those who have been here less than one year are also earning less money.

“I am sitting here right now filling out job applications. My friend works at Jefferson and she also tells me that there are SHAP workers there with less seniority.”

Kim continued, “After this week the plant will be down six weeks. I am hearing that after September we will be down the rest of the year. People are running out of their unemployment benefits so they are paying them sub to make up the difference. How long that will last, I don’t know. Will they place us somewhere else if our sub runs out?”