When Elvis Presley’s now legendary first recordings debuted on the Sun Records label in 1954, the personnel credits were simple enough. First on the label, in large print, was of course “Elvis Presley.” Just below that, in slightly smaller print, was the most modest sounding backing band in music history: “Scotty and Bill.” 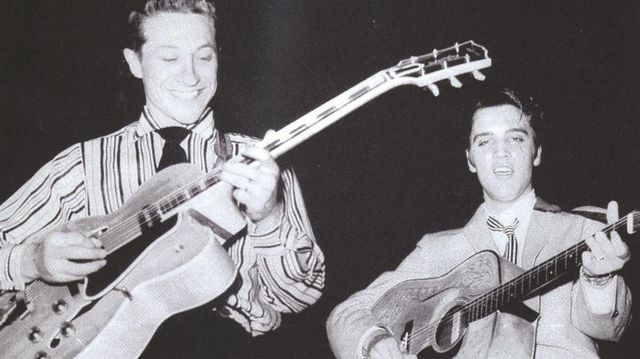 “Bill” was bassist Bill Black, a hard-swinging musician and comedian. “Scotty” was innovative guitarist Scotty Moore, who died June 28 at the age of 84. Moore was the last surviving member of the historic trio. Black died in 1965, Presley in 1977.

Moore’s guitar playing, incorporating elements of rhythm and blues and country music, helped to define the sound of rock ‘n’ roll. With the exception of Chuck Berry, it would be difficult to think of another guitarist as influential in the early days of the music or one who figured so prominently in its transformation from a piano-centered form to one in which the guitar played the leading role.

Winfield Scott Moore III was born December 27, 1931. He grew up on the family farm just outside Gadsden, Tennessee. Moore’s father was himself a capable musician who performed at local dances to make ends meet when the Depression threatened to sink the farm. Like his father, Moore tried his hand at both farming and music. The music stuck, but he was bored by farming and bored by school. He wanted to see the world.

In 1948, when he was just 16 years old, Moore joined the Navy. He was sent to China. With Mao’s forces poised to take power in 1949, Moore’s ship was ordered to evacuate US military and embassy personnel, along with American civilians. He later recalled in his autobiography, Scotty & Elvis: Aboard the Mystery Train, that the US Consul General in Shanghai, John Cabot, “ordered that American businessmen be given priority over women and children for evacuation.”

When Moore left the Navy in 1952, he wasted no time in pursuing a career in music. “On the outside,” wrote Moore, “I was cool and collected, a shy country boy. On the inside, I was bubbling with some serious emotions that bubbled up from only Lord knows where. Music was my passion. No one had ever heard music the way I heard it. No one had ever felt it the same way I felt it. I was convinced of that.”

He formed a country band, Doug Poindexter and the Starlite Wranglers, which would record a single for Sun Records in Memphis. Their bassist was Bill Black.

Moore soon befriended Sun Records founder Sam Phillips and in 1954 Phillips invited Moore and Black to accompany Elvis Presley on his first recording session. At the time the future rock stars assembled, Presley was working as a truck driver, Black was employed at a Firestone tire factory and Moore worked at a dry cleaner’s.

The music the trio made for Sun Records and later for RCA, where they were joined by drummer D. J. Fontana, deserves to be heard again and again. These recordings, among the finest examples of rock ‘n’ roll ever committed to tape, were something new and electrifying.

The Depression had passed. The Second World War and the Korean War were over. For a while at least, young people were able to find decent paying jobs. Maybe their lives would be better than those of their parents. Maybe they could do more than just “get by.” There was a sense of confidence, a sense of possibility that made its way into the music. It’s in the breathless, forward momentum of Elvis, Chuck Berry, Little Richard and Gene Vincent. New sensibilities and a new way of life demanded new sounds.

In later years, when asked how he came up with some of his signature licks, Moore would write “I was stretching, out on a limb, and that’s what came out.” It was an apt description of his playing. Moore took those “serious emotions that bubbled up from Lord knows where” and translated them into some of the most exciting guitar solos in popular music.

On songs like “Baby Let’s Play House” or “Hound Dog,” Moore’s guitar strings seemed to scream every time he bent them. In the middle of “So Glad You’re Mine,” he digs his heels into the ground and lets loose an intense barrage of notes, hitting each one as though he were furious with it.

“Jailhouse Rock” has some of the silliest material ever turned into a significant work, but it is one of the group’s best. As Elvis screams himself hoarse about a dance inside a prison, Moore’s heavy chording anticipates the kinds of sounds that would come to dominate in rock ‘n’ roll over the next decade or more.

During the 1950s, Moore burned up the strings on one classic after another—“Mystery Train,” “Heartbreak Hotel,” “Blue Suede Shoes.” He could be subtle too, adding almost imperceptible—even subliminal—accompaniment on ballads (Elvis was among the finest ballad singers of his generation). He also made extensive use of finger picking techniques picked up from country guitarists like Merle Travis and Chet Atkins.

The run of classic recordings would come to an end by the 1960s. Elvis had by then come fully under the influence of exploitive manager “Colonel” Tom Parker. The singing legend spent the better part of the ‘60s appearing in one formulaic film after another, featuring soundtracks that rarely ever lived up to his music from the decade before.

While Parker saw that Presley’s paychecks increased, Moore and Black found themselves out in the cold. They never received royalties for their recordings with Elvis, and were only ever paid for live performances. They were increasingly sidelined and eventually parted ways with Elvis in 1957.

Moore last appeared with Presley on the so-called ’68 Comeback Special, which saw the two men returning to their hits of the 1950s in a stripped-down, informal performance for television. It was a one-time deal, and they parted ways again when it was done.

Following his years with Elvis, Moore made a few solo and instrumental recordings, including 1964’s The Guitar that Changed the World, a title which might have been arrogant had it not actually done so. He also worked as a producer and engineer of recordings for other artists. Not infrequently, he appeared on stage or in films with the guitar greats who followed in his footsteps and were eager to pay him tribute.