HBO’s Veep: Lots of profanity, but not enough of what’s truly ugly

The HBO television comedy Veep, created by Scottish television director and filmmaker Armando Iannucci, recently completed its fifth season. Since it began airing in 2012, the series has garnered considerable critical acclaim, particularly for Julia Louis-Dreyfus’s performance as US Vice President Selina Meyer. The series has received numerous awards, including an Emmy for Outstanding Comedy Series, while Louis-Dreyfus has won four consecutive Primetime Emmy Awards for her performance.

The series follows Meyer’s political foibles and misfortunes as she struggles, usually fruitlessly, to increase her power and popularity in Washington. Hopelessly inept and holding no principle that she would not sacrifice for the sake of short-term political gain, Meyer flounders from one disaster to the next. She is surrounded by a supporting cast of yes-men and glad-handlers, including her perpetually overstressed chief of staff, Amy Brookheimer (Anna Chlumsky), her cold-blooded deputy communications director, Dan Egan (Reid Scott), and her childish and fawning personal aide, Gary Walsh (Tony Hale).

A series of personal crises brings down the sitting president, and Meyer assumes the office, having only a matter of months to govern before the ensuing election. At the start of the fifth season, the election has resulted in an electoral college tie, and Meyer’s team must engage in a series of underhanded maneuvers to secure the presidency.

Iannucci, whose previous works include the BBC political comedy The Thick of It and the Iraq war satire In the Loop, has stated in an interview that “I’m hoping that [the show] is an honest exaggeration of what actually happens” in official Washington. Indeed, in fits and starts, the series manages to capture something of the vacuousness of American political life, and the results are occasionally amusing. In the end, however, the show pulls far too many punches to be an effective satire, and even ends up offering a backhanded endorsement of the very people it purports to mock. 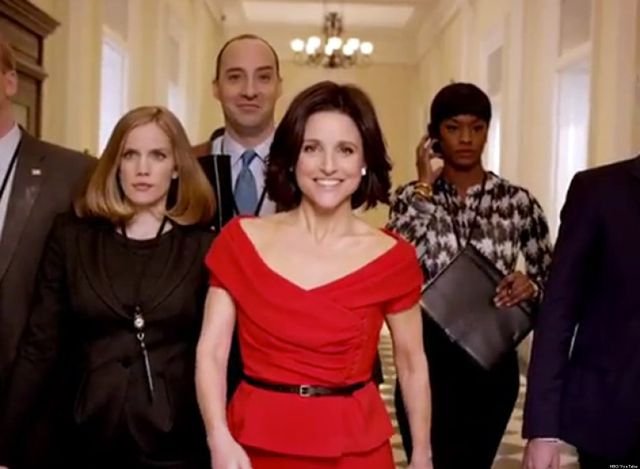 Veep is at its strongest when it lampoons the fraud and stupidity of D.C. politics, particularly the focus-group-tested political doublespeak that has become so ubiquitous in official circles. Meyer’s speeches are meaningless pap, filled with paeans to “freedom” and “democracy,” which comically contrast with her cynical and profane offstage persona. From the title of Meyer’s ghostwritten book, Some New Beginnings: Our Next American Journey, to her campaign slogan, which promises “Continuity with Change,” the emptiness of modern politics is effectively mocked. (Australian Prime Minister Malcolm Turnbull used a similar slogan in his 2016 campaign, apparently unwittingly.)

A recurring joke has Meyer’s team tasked with crafting speeches and press statements that straddle both sides of an issue without saying anything of substance. One character memorably resolves to write “the Gettysburg Address of tightrope-walking, say-nothing bulls***.” The members of the press corps are presented as a cadre of self-promoting scavengers. One reporter, when deciding whether to run a smear story based entirely on unsubstantiated rumors, explains, “We put it out there, and something will arrive that backs it up. That’s journalism 101.”

What the characters lack in intelligence, they more than make up for in vicious careerism. Dan Egan is particularly notable in this regard. Nasty, ruthless and emotionally stunted, he calculates every move, personal and political, with the sole aim of furthering his own career. In addition to his role in Meyer’s administration, Dan becomes, at various points, a CNN analyst, a corporate lobbyist and a CBS talking head, shifting between the public and private sectors with ease.

Certain scenes effectively portray the corruption at the heart of modern politics. In one episode, Meyer’s senior strategist colludes with an executive from a Google-like company. The former wants a damning story about one of Meyer’s rivals to remain front and center; the latter wants tax breaks for tech firms. They both cynically refer to “the public” and its concerns in the exchange. When they reach a dirty deal, the conversation concludes: “I do admire the power of the public,” says Meyer’s strategist. “Aren't they magnificent?” responds the tech firm executive.

Another plot thread has Meyer quite literally in bed with the big banks, as she engages in a sexual relationship with a high-powered Wall Street executive and later pledges to offer his bank a major bailout.

The dialogue is laced with profanity, far more than the average crass television series. Presumably, this is intended to give the characters and proceedings a realistic or “shocking” quality, but the effect is more numbing and tedious than anything else, especially in later seasons.

Indeed, Veep’s biggest shortfall is that, for all its coarseness, it is still quite timid in its portrayal of the ugly “side” of American politics.

The series largely focuses on the minor scandals that dominate day-to-day political reporting. Gaffes, misstatements, silly campaign ads, volatile poll numbers––the characters (and the show’s creators) obsess over such things. While manufactured controversy is no doubt a pervasive part of Washington life, there is precious little mention in Veepof war policy, drone strikes, bombings and assassinations, episodes that surely consume a great deal of a real president’s focus and attention. 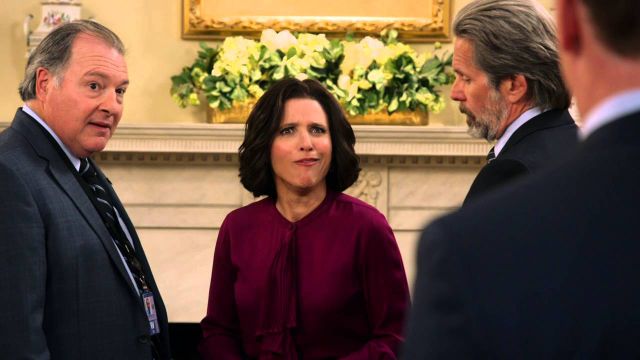 While the show’s creators might consider these topics too serious to tackle in their “light” political comedy, that only highlights the limitations of their approach.

What’s more, while Veep does portray the misanthropy of the Washington elite (Meyer at one point refers to a devastating mudslide as the “funniest” kind of natural disaster), the show’s creators justify this by portraying “regular Americans” as almost universally backward and imbecilic. Crowds are easily suckered in by Meyer’s “patriotic” rhetoric. One gets the sense that, for the show’s creators, leaders like Meyer are what the American public deserves.

Though the series purports to satirize the Washington elite, its overall outlook accepts far too much of the official D.C. line. This was most glaringly on display in an episode focused on US relations with China. The volatile situation in the South China Sea is presented entirely as a result of Beijing’s belligerence. One character remarks that the Chinese claim on disputed islands “destabilizes the whole region.” Meyer’s aggressive negotiations, in which she secures a deal to “free” Tibet, are presented as a major triumph. Apparently, to the show’s creators, the people who run the US government might be idiots, warmongers and cretins...but at least they’re our idiots, warmongers and cretins.

The creators have proven unable to locate the source of the rot that has so degraded American politics, and the resulting satire cuts only skin deep. The debased political situation in the US is not the result merely of the stupidity or selfish careerism of the officials involved (though it certainly doesn’t help matters), but of the terminal crisis of American capitalism. Insofar as the artists refuse to dig deeper, the show has continued to lose steam. The fifth season, the first without Iannucci as showrunner, is easily the series’ most tepid.

The political system in the US is ripe for a genuinely savage satire, but audiences, unfortunately, won’t find it here. For all its foul language, Veep lacks bite.