“The union signed away their rights”

Some 12 weeks after the Communications Workers of American (CWA) shut down the strike by 40,000 Verizon workers, about two dozen strikers remain victimized and on-the-job harassment continues.

More than 39,000 Verizon workers struck for seven weeks this spring resisting concession demands by management, including the imposition of hundreds of millions of dollars in additional health care costs. The CWA isolated and betrayed the strike, accepting a sellout agreement that imposed cuts in healthcare and left workers victimized for picket line infractions.

As a result of an agreement on strike discipline signed by the CWA in 2012, management can fire workers for a number of violations, including so-called hate speech. The agreement, signed by the CWA’s Dennis Trainor, now vice president of CWA District 1, can be viewed here.

Since the end of the strike the CWA has said virtually nothing about the fate of the victimized workers, other than to take up work place collections to assist with their expenses. Meanwhile, the sellout of the strike by the CWA has given management a green light to step up workplace harassment, especially of field technicians, who are being closely monitored for “productivity.”

The situation facing Verizon workers refutes the claim of the CWA leadership and a host of pseudo-left groups that operate in the orbit of the trade union bureaucracy that the Verizon strike was a victory. Instead, the result of the contract betrayal has been lowered living standards and stepped up attacks on Verizon workers.

A veteran Verizon worker in New York City told the World Socialist Web Site, “There has been harassment and suspensions. It is taking a subtle form, but it is all about productivity. The union is doing nothing.

“The guys in the field are being harassed at an unmerciful level. Management stopped the QAR [Quality Assurance Program]. But the drive for productivity is increasing. Because of the nature of the work, very often the guy with the lowest productivity is actually working the hardest. It is counterintuitive, but it is the case. If you are assigned an installation job with a great deal of physical labor involved it takes longer.

“It is not like an assembly line where tasks can be measured. Every job is different. If on one installation you have to attach a wire to five telephone poles another job might require you attach only one to one pole.”

“Most workers understand that you can be fired for ‘hate speech.’ What they don’t understand is that the union signed off on it.

“The CWA is being very tight-lipped about it. In Local 1101 [New York City] there are five. They are collecting donations from members rather than using money from the union’s defense fund, which is creating a lot of anger.

“In the case of one of the fired workers a manager claims he called him a f----t. There were six workers there who said he didn’t say it, but they took the word of the manager. He was a steward in the union.” 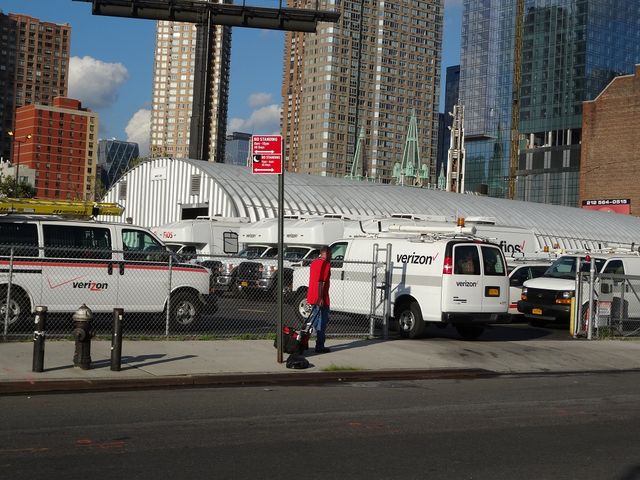 A World Socialist Web Site reporting team spoke with Verizon field technicians in New York City Thursday at the truck yard on 39th street and 11th Avenue in Manhattan. Workers told the WSWS that they were unhappy with the outcome of strike.

As the workers rushed out from the yard most were interested to take a leaflet but, as one worker explained, “I can’t stop to talk because I am on my way home to see my family. Just struggling to be able to get out on time is one way we are harassed.”

Commenting on the workers fired for strike-related issues one worker said, “There is a code of ethics for how we conduct ourselves during a strike. However, supervision is quite capable of making up things. The company takes hostages.”

Another worker volunteered, “They follow you around, even when you go out of the yard to an assignment.”

A worker who stopped briefly said, “Verizon would like to break the union. They want to have contractors, not employees. They are enforcing rules to a microscopic level. They want to get up your butt. They want to know when you are going here and doing this, and when you are there doing that. That thing about hate speech, they can define anything as hate speech if they want.”

Rushing by, a worker replied, “I have seen some harassment. It is micro-management. They go after certain people they want to get rid of. They are eliminating our rights.”

Tony, who has worked for Verizon for 20 years, gave his analysis of the attacks on the workers: “The harassment is really more red tape, such as that we have certain assigned Saturdays. It used to be that I would work only every other Saturday. Now they make guys work five Saturdays in a row. I couldn’t be with my family during July vacation.

“They are setting it up to let technology smash things. For example, Verizon is trying to set things up so routers and the entrance units are combined. This would reduce the amount of wiring and the amount of work. But then it will all be made wireless. Then they will be able to reduce the work force.

“Meanwhile, with the contract settled after the strike, we pay more for health care; our co-pay is higher and we pay more per month. It used to be that if you work harder, you get paid more. There is no middle ground anymore. They want cheap labor. They bring in more people who have education in order to get cheap labor. They ship profits overseas and hide it.”

Meanwhile, earlier this month AT&T Internet employees voted by a 92 percent margin to strike. The 1,200 workers are members of the CWA. Negotiations have been in progress since June, but the CWA has not set a strike deadline.

Sixteen thousand AT&T West workers in California and Nevada are still without a contract in talks that have dragged on since April. The CWA ordered the AT&T West workers to stay on the job without a contract during the Verizon strike in order to isolate the Verizon workers and prevent a united struggle. At the same time, in an effort to diffuse tensions, the CWA has called a series of diversionary grievance strikes.