Tens of millions of workers throughout India participated in a strike yesterday against austerity measures and pro-corporate economic reforms implemented by the Bharatiya Janata Party (BJP) government of Prime Minister Narendra Modi.

The strike is an expression of mounting opposition in the working class in India and internationally. It follows significant strikes and demonstrations in the US, Europe, China and other countries against assaults by governments and corporations on jobs and working and living conditions.

However, the aim of the unions that called the strike, particularly those affiliated with India’s main Stalinist parliamentary parties—the Communist Party of India (Marxist) (CPM) and the Communist Party of India (CPI)—is to defuse growing opposition and harness it to the establishment parties. This means above all tying the mounting social opposition to the Congress Party, the traditional ruling party of the Indian bourgeoisie. 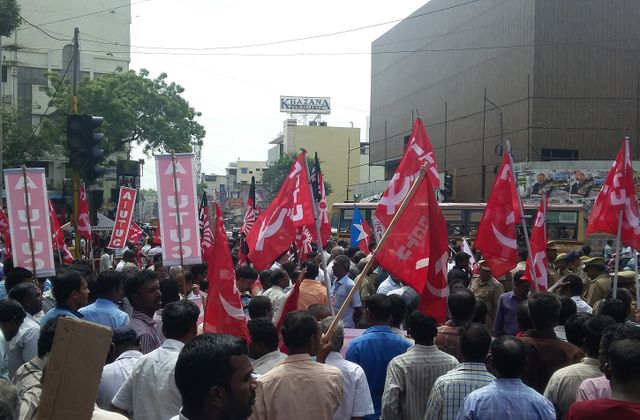 Support for the strike on Friday varied by sector and state. Those participating included workers in government banks, insurance, telecom and postal services, along with central government-owned companies in the coal, gas and oil sectors. Workers are demanding higher wages, job and social security, and an end to privatization and pro-investor changes to labor laws.

The southern Indian states of Kerala and Karnataka, the eastern state of Odisha and the northern states of Haryana and Punjab were mostly shut down. Workers joined protest demonstrations and rallies in various cities in those states. Demonstrations were also held in Chennai and Visakhapatnam in southern India, in the capital New Delhi and in the eastern state of West Bengal. In Kerala, the newly elected CPM-led Left Democratic Front (LDF) government supported the strike in an effort to cover up its own pro-corporate economic policies.

In West Bengal, workers employed by central government institutions joined the strike despite threats by the right-wing Trinamool Congress (TMC) state government. With workers facing significant penalties if they participated, public transport and state government offices were functioning. However, significantly fewer people were seen on roads. Nearly 200 were arrested by state police in an effort to suppress the strike and protests. In the state capital Kolkata and other cities, TMC-organized thugs held counterrallies against the strike and came close to physical violence against strikers.

Under conditions of growing working-class opposition, the Stalinists are deepening their political collaboration with Congress, including through their first-ever electoral alliance forged during the April-May state assembly elections in West Bengal. They have also lined up with Congress in the name of “fighting for democracy” against violent attacks by the TMC state government in West Bengal.

In fact, Congress is responsible for initiating the policies that Modi is now expanding and for creating the conditions for the Hindu chauvinist BJP’s rise to national power. In 1991, Congress initiated the Indian bourgeoisie’s economic reforms aimed at transforming the country into a cheap labor platform for global capital. It has also played a central role in forging a “global-strategic” partnership with American imperialism.

In May 2014, Modi, the chief minister of Gujarat at the time of the anti-Muslim pogrom in 2002, was brought to power by the Indian ruling elite to ruthlessly push ahead with pro-investor economic reforms and more aggressively pursue the Indian elite’s reactionary great power ambitions.

Modi’s government has cut subsidies and social spending and sped up disinvestment, the partial privatization of public-sector companies and the further opening up of sectors like insurance and finance to foreign capital. In the latest move, it has pushed through a constitutional change to implement a Goods and Service Tax (GST) to further place the tax burden on working people and rural toilers.

Hand-in-hand with these austerity measures, Modi, through developing India’s military-strategic ties with the US, has brought the country closer in line with Washington’s war drive against China. On Monday, India signed a Logistic Exchange Memorandum of Agreement (LEMOA) with the US, allowing US warships and combat planes to access Indian bases. 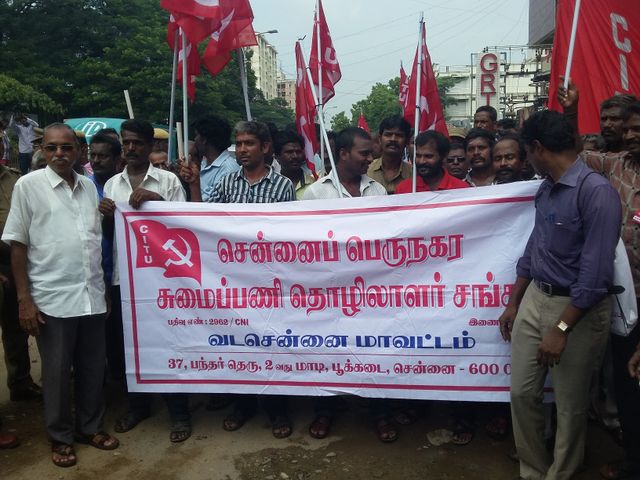 Despite boasting by Modi and his Finance Minister Arun Jaitley that economic growth is at more than 7 percent, workers throughout the country face rising food prices, growing unemployment and poverty. According to a recent report, during a recent 12-month period, little more than a hundred thousand out of some 10 million youth entering the labor force could find employment in eight key, labor-intensive sectors. Seventy percent of the total population is forced to live on less than $2 a day.

At the same time, the right-wing economic policies pursued by both Congress and the BJP have led to soaring wealth for a small fraction of the population. India is home to more multimillionaires than any Asian country outside of Japan and China, along with 84 billionaires (placing it fourth in the world after the United States, China and Germany).

Under such socially polarized conditions, the Modi government has reacted by whipping up Hindu communalism to divide the working class and create the framework for a massive assault on democratic rights. Any opposition to the policies of the Indian bourgeoisie is labeled “antinational.”

The Stalinists, meanwhile, have responded to growing social opposition by redoubling their efforts to politically subordinate the working class to the parties of the bourgeois establishment, mainly the Congress Party and also to various caste-based and regional parties like the Janata Dal (United), the Biju Janata Dal and the Dravida Munnetra Kazhagam, in the name of defending “secularism” and “democracy.” All those regional parties have enthusiastically supported neoliberal economic reforms and India’s closer lineup with the US war drive. They have also been part of BJP-led governments.