Clint Eastwood’s Sully: The “Miracle on the Hudson” dramatized

Directed and produced by Clint Eastwood, screenplay by Todd Komarnicki, based on the autobiography Highest Duty by Captain Chesley Sullenberger and Jeffrey Zaslow

“No one has ever trained for an incident like that,” observes pilot Chesley “Sully” Sullenberger (Tom Hanks) in director Clint Eastwood's new movie Sully, which treats the now almost legendary emergency landing on January 15, 2009 of a commuter jet in the Hudson River between New York City and New Jersey.

Eastwood’s film is a taut and thrilling rendering of the incident. Only minutes after takeoff, US Airways Flight 1549––en route from New York’s LaGuardia Airport to Charlotte, North Carolina’s Douglas International Airport––was hit by a flock of geese, disabling both its engines at an altitude of only 2,800 feet.

The pilots of the Airbus 320, Sullenberger and First Officer Jeff Skiles, determined the aircraft was unable to return to LaGuardia or reach nearby Teterboro Airport in northern New Jersey. Their heroic water landing saved the lives of all 155 passengers and crew. It was a remarkable feat, executed by a pilot with decades of experience and a sterling record. It came to be known as the “Miracle on the Hudson.” 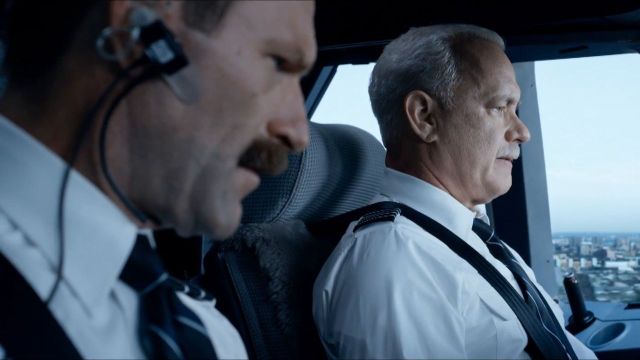 The 2009 incident and the actions of Sullenberger in particular continue to hold a special place in collective public consciousness. The latter demonstrated something about human capacities––resourcefulness, expertise and calm under potentially catastrophic circumstances––that has an enduring meaning.

Eastwood’s Sully opens with the titular character in the throes of a nightmare. He is suffering from the psychological effects of the crash, as well the stress from the subsequent challenge to his reputation and career by the National Transportation Safety Board (NTSB), who set upon him in the midst of the pressure of massive, non-stop media coverage. (The NTSB has objected to the prosecutorial manner in which it is depicted in the movie.)

Eastwood offers a skillful accounting of the terrifying landing in the 35-degree Hudson (2 degrees Celsius), the evacuation of the plane by the self-sacrificing crew members and the rescue operation by an ad hoc flotilla of boats and ferries who were operating in the vicinity. (An air traffic controller comments ominously that “people don’t survive water landings.”) The crash sequence is not shown in a purely chronological fashion. It is interspersed with scenes of Sullenberger’s and Skiles’s encounter with NTSB officials. (Skiles is played by Aaron Eckhart.)

Those officials suggest that preliminary reports show the left engine was running at idle, and therefore not a “dual engine loss,” as Sully asserts. If the board’s tests are correct, they point in the direction of “pilot error.” In addition, NTSB’s computer simulations lead to the conclusion that the plane could have landed at either LaGuardia or Teterboro. At one point, another pilot obliquely offers an explanation for the aggressive machinations of the board: “It didn’t turn out alright for the airline and the insurance company.” 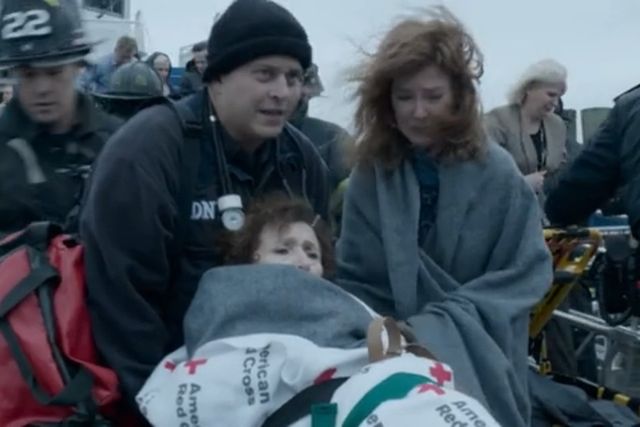 Scene of the rescue in Sully

Realizing that his entire life’s work will be “judged on 208 seconds,” Sully arranges to have the pilot simulators available at the public hearing. Under Sully’s questioning, it is revealed that the “sim” pilots needed practice sessions (17 in one case) to have things turn out right. Furthermore, Sully and co-pilot Skiles (“They’re playing Pacman and you were flying a machine full of human beings”) insist “human” parameters be entered into the calculations. When the board allows 35 seconds––the time it would take real-life pilots to assess their situation––to be factored into the simulator demonstrations, the pilots of Flight 1549 are able to prove that “we did our job.”

Sully’s cinematography provides remarkable imagery, supported by the understated score co-written by the director. Hanks convincingly inhabits the role of the 57-year-old pilot, drawing from the deep to play the protagonist who, appropriately, carries the film. Eckhart is a worthy Skiles. Scenes depicting the phone conversation between Sully and wife Lorraine (Laura Linney) are less successful, and not organically incorporated into the tight drama.

An interesting side note: during Eastwood’s stint in the army, in October 1951, he was a passenger on board an Douglas AD-1 military aircraft that crashed into the ocean off the coast of northern California, forcing him and the pilot to swim several miles to safety.

In Sully, Eastwood brings to bear his greatest strength, a certain feeling for the American “common man,” especially if he is a skilled professional and acting alone (or seeming to be). The actor-director’s propensities here (like in True Crime, 1999) find a decent and humane outlet, whereas they do not in movies like American Sniper (2014, a reactionary mess) or Gran Torino (2008, a confused, murky work).

Given Eastwood’s inclinations, it is no surprise that he sidestepped certain issues bound up with the “Miracle on the Hudson.”

In January 2009, the WSWS noted the “social paradox” exposed by the episode. The media and politicians, seeking to share Sullenberger’s limelight, tirelessly portrayed the pilot as a “hero.” However, we pointed out, the conditions and living standards of such “heroes” in the airline industry had been under nearly continuous attacks for decades. The levels of professionalism and skill exhibited by Sullenberger were “being undermined by the policies of the corporate elite and the government.”

The WSWS noted, for example, that “US Airways … has undergone two bankruptcies and shredded workers’ jobs, benefits and pensions along the way, while enriching executives … A Pittsburgh newspaper reported in 2006 that nearly 9,000 US Airways employees in that area alone had lost their jobs since 2001. In 2003, the airline was one of the first major carriers to rid itself of pilots’ pensions in the interests of cutting costs, releasing the pension fund to the federal Pension Benefit Guaranty Corporation [PBGC], a move that inevitably results in a reduction in pension benefits.” 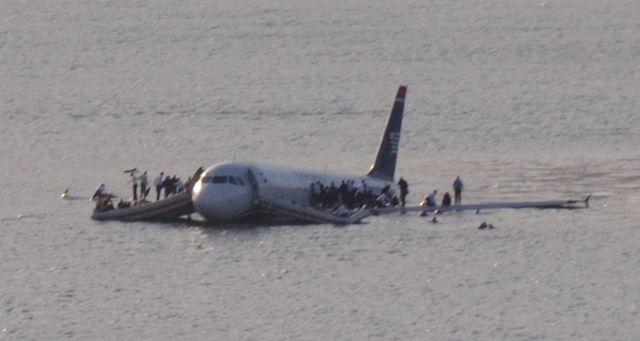 Sullenberger’s honest and principled character and outlook were on display when he appeared before the House Transportation and Infrastructure Committee’s subcommittee on aviation on February 24, 2009. He started by explaining that he had “amassed a total flying time of almost 20,000 hours and flown approximately one million passengers in my 29 years as a professional airline pilot.”

He went on to remark that it was “an incredible testament to the collective character, professionalism and dedication of my colleagues in the industry that they are still able to function at such a high level. It is my personal experience that my decision to remain in the profession I love has come at a great financial cost to me and my family. My pay has been cut 40 percent, my pension, like most airline pensions, has been terminated and replaced by a PBGC guarantee worth only pennies on the dollar.”

In an interview with Katie Couric of CBS News, Sullenberger put the matter somewhat differently: “One way of looking at this might be that for 42 years, I’ve been making small, regular deposits in this bank of experience, education and training. And on January 15 the balance was sufficient so that I could make a very large withdrawal.”

In any event, the venal politicians who honored Sully and organized every possible photo opportunity with the remarkable pilot, of course, paid no attention to his words or his warning.

In the final image of Eastwood’s Sully, the real passengers are gathered around the real pilot who movingly says: “We will be joined in our hearts and our minds forever.” This moment expresses a depth of emotion and thought that the movie attempts, with a degree of success, to reproduce.