Authorities in El Cajon, California finally released two videos of the police shooting of Alfred Olango, father of two, after more than three days of escalating protests. Two clips were taken from a security camera of a nearby taco shop and the other was from a cellphone. Together the footage lasts less than 90 seconds total.

The day of the shooting, Olango’s sister called 911 and waited an hour for help. Contrary to initial reports, Olango was not mentally disabled but was experiencing an emotional breakdown after the death of a close friend. She told the media that she expected psychiatric responders to arrive, but instead El Cajon police officers used a taser on him and shot him dead in less than two minutes.

The videos unequivocally show Olango being cornered like a dangerous animal before police end his life. This did not stop El Cajon police in the immediate aftermath of the shooting and protests from releasing a single frame from the video which would appear to show Olango in a shooting stance a few feet away from the officers.

The news media played a despicable role in promoting the still image as proof that Olango was making a threatening gesture toward the officer. The front pages of both the Los Angeles Times and the San Diego Union-Tribune both featured the picture which gives the false impression that the shooting was justified.

The El Cajon police were forced to admit that the object in Olango’s hands was a vaping device, also known as an electronic cigarette. 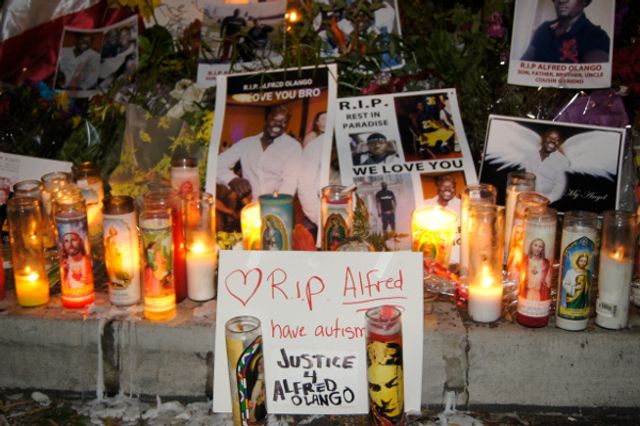 A memorial for Olango

The officer who shot and killed Olango has been identified as Richard Gonzalves, a veteran of the police force for 21 years who had been demoted after sexual harassment charges were filed against him by a female subordinate.

El Cajon Police Chief Jeff Davis held a news conference at police headquarters to declare to the media that “for the sake of the well-being of the community” they would release the tapes that protestors, including Olango’s own family, had been demanding. However, it was only after three nights of protests and national media coverage that the police relented.

Dumanis has always sided with the police in officer-involved shootings. The DA’s policy has always been to withhold video evidence until after an investigation, or cover-up, had been completed.

This year Dumanis was forced to release more than a dozen other videos of police shootings, all of which her office found to be justified. It should be noted it was Dumanis who withheld the footage of Fridoon Nehad, an unarmed Afghan refugee killed by the San Diego police. Only after a civil lawsuit was filed by Nehad’s family and a federal judge ordered the video released did Dumanis’ office release the video last December.

In response to the latest video release Dumanis told news media, “We have not formed any conclusion yet, there is still information that we are waiting to see,” adding, “Video evidence is one piece of the evidence that is out there.”

Dan Gilleon, the attorney representing the family of Olango, accused the police of litigating the case with the media saying they had to “cherry-pick” an image to absolve themselves.

El Cajon, a working-class city of 100,000 people, has seen daily and nightly protests against the murder of Olango. Residents and demonstrators blocked traffic intersections and on Wednesday and Thursday night faced off against police in riot gear. Schools and businesses closed early on Friday for fear of more violence.

Police claimed to be responding to isolated cases of fights and petty vandalism when they fired pepper balls and concussion grenades at protestors. A demonstrator told Fox5 San Diego, “Why are they shooting grenades at us? We didn’t approach them. Everybody was standing back, we were at least 15-20 feet back.”

As is always the case with public demonstrations against police brutality, the authorities were decked out in paramilitary gear and acted in a provocative manner against relatively small numbers of protests. The response of the riot police, some of whom were in SWAT gear, was completely out of proportion to the alleged “threat to public safety” from the protestors.

After reports of glass bottles and bricks being thrown at officers, Thursday night’s demonstration was declared to be an “unlawful assembly” and was then dispersed violently. At least two people were arrested. As of this writing, protests are continuing in El Cajon.

Earlier on Thursday, Pamela Benge, the mother of Alfred Olango, made an emotional appeal to news cameras pleading for peaceful protest. She and her son were refugees from Uganda who fled to the United States in 1991. Like so many refugees denied the right to make a decent living under capitalism, Alfred had been picked up by the police for petty crimes and was even threatened with deportation back to Uganda, but his native country apparently refused.

Benge told reporters, “I don’t want war, if you have seen war you will never ever, ever want to step near.” She explained why they left war-torn Uganda, “We wanted protection. That is why we are here.”

Alfred Olango, not unlike Nehad, was in a very real sense a double victim of American capitalism. Unable to live in a country ravaged by the predations of American imperialism, he was ultimately killed by the domestic police force in the US.