On September 22, thousands of teachers throughout Brazil took to the streets in defense of wages and working conditions and against education budget cuts being prepared by President Michel Temer of the PMDB (Brazilian Democratic Movement Party). It was the largest demonstration of workers since last month’s impeachment of Workers Party (PT) president Dilma Rousseff.

The demonstrations were called by the National Confederation of Education Workers (CNTE), which is affiliated to the CUT, Brazil’s largest trade union federation. Also joining the call for strike action by the CNTE were unions representing teachers and workers at federal universities, which led to a one-day strike on some campuses. 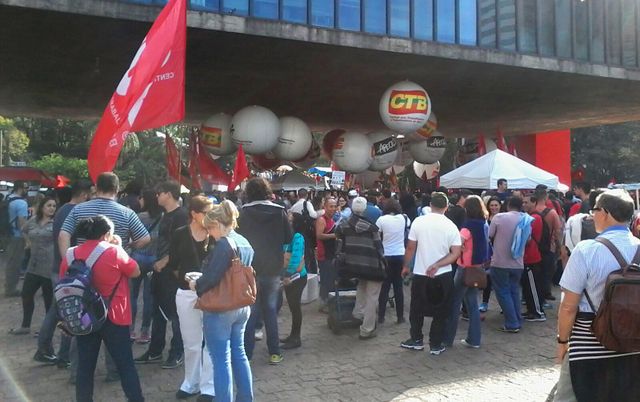 A demonstration in Sao Paulo

As part of a broader program of attacks on the Brazilian working class, President Temer expects to win approval in the National Congress, by the end of this year, of two proposed constitutional amendments that would have drastic effects on education. The first, initially proposed by ousted PT President Rousseff, freezes the wages of existing public employees and prevents the hiring of new ones for the next two years.

The other one, authored by President Temer, limits social spending to the level of the previous year’s inflation for the next 20 years. Economists estimate that it would slash education spending by 60 billion reais (almost US$19 billion) over the next 10 years, which would make the goals of Brazil’s National Education Plan unviable.

Unanimously approved by the National Congress in 2014, the National Education Plan has 20 goals for the next 10 years, among them the universalization of basic education and an increase in spending on education to 10 percent of GDP. Today, there are 3 million Brazilian children and youth between the ages of 4 and 17 years old out of school in Brazil.

In addition to cuts in the education budget, teachers protested against Temer’s proposals for pension “reform,” which would increase the retirement age to 65, and a labor reform, with includes the possibility of employment contracts being tied to hours worked and productivity, and also would increase the working day to 12 hours. Temer’s labor reform also proposes that direct negotiations between employees and employers take precedence over collective agreements.

These “reform” proposals are being advanced in the context of the worst economic crisis in Brazil since the Great Depression, with economic contraction for a second consecutive year, rising inflation and the unemployment rate above 11 percent.

On September 21, Folha de Sao Paulo reported that in August, 52 percent of wage agreements were below the inflation rate. One day before, on September 20, post office workers ended a week-long strike after accepting a wage increase of 9 percent. Bank workers, who have been on strike for three weeks, have already rejected two proposals of the National Banks Federation, the last one consisting of a wage increase of 7 percent.

Cuts in real wages and precarious working conditions especially affect teachers, the sector with the highest education levels in Brazil, and the lowest wages. The report “Education at a Glance 2016,” published by the Organization of Economic Co-operation and Development (OECD) on September 16, showed that Brazilian teachers receive 39 percent of the average income of teachers from 41 countries, ahead only of Colombian and Indonesian teachers. It also showed that Brazilian teachers work the longest of all the surveyed countries, with two weeks per year more than the average.

The largest demonstration of the September 22 actions was held in Sao Paulo, where 20,000 teachers gathered on Paulista Avenue. There, APEOESP, the 180,000-member teachers’ union affiliated to CUT, also held its assembly.

Teachers in Sao Paulo have been facing two central issues in recent years. First, there is the performance-based policy that the right-wing party PSDB has implemented since 1994, replacing regular wage increases by bonuses based on standard testing. Since July 2014, the date of the last wage increase, Sao Paulo teachers have accumulated a loss in real wages of nearly 17 percent. This is the second consecutive year in which Governor Geraldo Alckmin has reduced the education budget.

Second, teachers in Sao Paulo face a long record of betrayals by APEOESP, including the sabotaging of assemblies and isolating the struggles of teachers of secondary students, who occupied almost 200 schools last year against a restructuring plan. APEOESP has collaborated closely with the state government in implementing attacks on teachers and public education.

The great majority of speeches at the September 22 assembly addressed two main issues: the recent criminal case brought by federal prosecutors against former PT president Luiz Inacio Lula da Silva, charging him as the “maximum commander” of the Petrobras bribery scheme, and the need for a general strike to defeat the reforms proposed by Temer.

The PT and the pseudo-left bureaucracy in APEOESP denounced the charges against Lula, calling him “a symbol of the working class” who “has fought against the Brazilian bourgeoisie.” João Felício, former APEOESP and CUT president, and current president of the International Trade Union Confederation (ITUC), delivered a speech saying, “Lula was an obstacle to the ruling class, which never liked him.”

Such speeches only show how far from the working class, the PT and its controlled unions, APEOESP and CUT, have gone.

During its 13 years at the head of the Brazilian State, the PT was the main party of Brazilian capitalism. Just as in the USA, where the AFL-CIO, the US affiliate of the ITUC, has opposed the development of any mass political movement of the working class independent of the Democratic Party, PT-controlled unions in Brazil are seeking to channel the growing dissatisfaction of the Brazilian working class over Temer’s proposed reforms toward support for the PT in the next elections.

The speeches regarding the need for a general strike could not be more rhetorical. During the impeachment procedure against former president Rousseff, the PT and CUT did nothing to mobilize the working class. Instead, while the CUT suppressed workers’ struggles, Lula worked behind the scenes with the same corrupt politicians he now accuses of being golpistas (putschists) to prevent the impeachment.

Despite the increasingly clear plans of President Temer to unleash his attacks on the working class, the CUT was unable and unwilling to unite the workers’ struggles. In the last month, three major sectors of the working class in Brazil took to the streets in protest: the post office workers, the bank workers and teachers, all of them affiliated to the CUT. At the same time, the CUT was unable to organize any broader mobilization towards a general strike.

As the interests of the unions collide directly with those of the workers, the distrust of workers towards the unions is rising. This has already begun happening with teachers, whose participation in the September 22 demonstration decreased since the previous one, on August 26.

APEOESP’s assembly decided to join a one-day strike of public employees on October 5 against Temer’s reforms. It will also join the CUT’s national one-day strike scheduled for October 21. However, insofar as the struggle of teachers and workers against Temer’s reforms moves forward, it will soon be suppressed by the same unions that are calling the general strike. Only an independent mass movement of the working class will be able to stop the attacks backed by Temer and all sections of the Brazilian ruling establishment.