Protests continue in El Cajon, California over the police killing of Alfred Olango

Over 300 people marched through the streets of El Cajon, California Saturday morning in the fifth day of protests against police violence. Sparked by Tuesday’s police killing of unarmed African immigrant Alfred Olango, demonstrators have gathered every day and night at the various locations throughout the area including the scene of the murder, the police station, and the city’s Civic Center.

On Saturday, at one of the largest demonstrations yet, the protesters met at Prescott Promenade Park and proceeded to march around the city’s Civic Center, alongside of El Cajon Police headquarters, ending at a plaza outside El Cajon City Hall.

The police were present from the beginning, although they seemed to keep a more substantial distance than days prior. Many officers lined the buildings above the marching protesters and a large police motorcade quickly appeared ahead of the march as the demonstrators entered the first intersection, shutting down traffic. The event, from start to finish, was peaceful, with the exception of one scuffle between protesters and an onlooker who reportedly was shouting racial slurs.

The march was led by ministers and the relatives of the victim, although many other groups were present, such as the National Action Network (NAN), Black Lives Matter, and Moms of Black Boys United (MOBB), among others. The banner held on the front line of the march read “#NotOneMore” with a picture of Alfred next to it.

After the march, the protesters gathered in a plaza outside the Civic Center where a number of people addressed the crowd including Richard Olango Abuka (Olango’s father), local religious leaders, a neighborhood poet, and ministers.

Undoubtedly the most powerful presence was Olango’s father, who spoke passionately to the crowd, repeatedly stating, “When that officer pulled the trigger on my son, he declared war on humanity.” More than any other speaker, Richard Abuka called for unity among those who are seeking an end to police violence, and, while he urged people to be peaceful he also added, “We’re here praying for peace, but we can’t have peace if we don’t have the independence and freedom to pursue our goals of seeking justice for my son.” 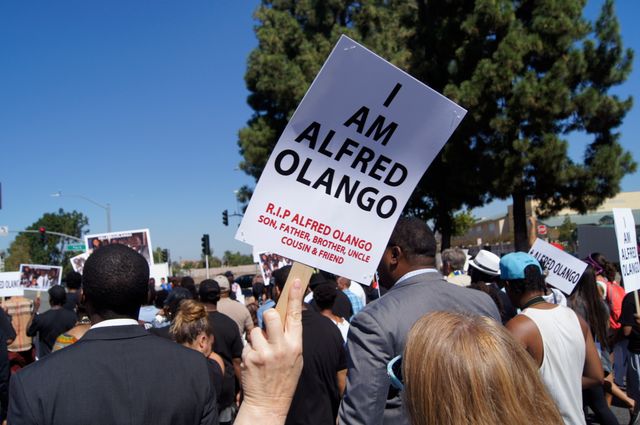 Part of the protest on Saturday

Abuka made many demands such as better training for officers, the removal of the El Cajon police chief, and an independent investigation into the murder of his son. He concluded his address by leading the crowd in a chant, “Uhura arambe, uhura arambe” which he said means “freedom” and “independence.”

Rev. Shane Harris of NAN also spoke at length, including an appeal for a church-style offering of funds for the funeral, empty words about a “strategic plan” to confront police brutality. This “plan” seemed to consist of nothing more than offering support for elected officials and “putting aside our differences for a bigger cause.”

The protests continued Saturday evening, this time moving out of El Cajon and into downtown San Diego, with a march starting at Balboa Park’s “World Beat Center” to the Hall of Justice in the heart of the city. 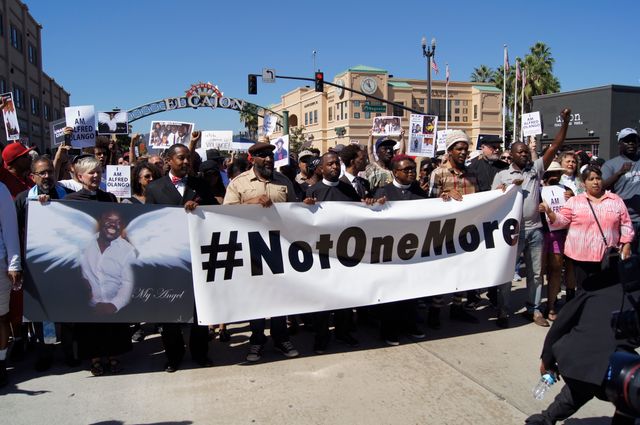 The front of the march, including members of Alfred Olango’s family

The Saturday protests came on the heels of the release of two videos documenting the murder. Both the cell phone video and footage from a security camera at a nearby restaurant show an officer firing deadly shots at unarmed Olango less than two minutes after arriving on the scene. The videos, which had previously been confiscated by the police, were finally shown at a press conference Friday morning as an attempt to dissipate the social upheaval.

District Attorney Bonnie Dumanis was quick to remind the public that although the videos were released, they are only “one part of the investigation process.” The officer who shot Olango, Richard Gonsalves, and the officer that tased him, Josh McDaniel, have both been placed on paid administrative leave.

Protesters and speakers have called for a charge to be brought against the officers involved in the death of Alfred Olango, but police are rarely charged in killings such as these. Out of the thousands of police killings in the past three years, only a handful of officers have had any charge brought against them, let alone a murder charge.