The former Democratic candidate is seeking to rebrand his “political revolution” into a get out the vote effort for Clinton, the favored candidate of Wall Street and the military intelligence apparatus. However, instead of the crowds of thousands he addressed during his primary campaign, Sanders spoke before audiences of only several hundreds, largely made up of Democratic Party faithful.

At his first stop at the UAW Local 600 union hall, he addressed an audience of 200 to 300 people mobilized by the UAW. In her introductory remarks, UAW Vice President for General Motors Cindy Estrada noted the difficulties Clinton faced in attracting young voters. She called on those in attendance not to vote for Green Party candidate Jill Stein or other “third party candidates.” She urged union members and others in the audience to make an all out effort to get out the vote for Clinton and to register those not already registered.

During the revolt of autoworkers against UAW-backed contracts last fall, Estrada played the lead role in ramming through the concessions. The vote ended in a supposed “yes” vote at Local 600 that gave the UAW just barely enough votes to claim that the contract passed, amidst accusations from workers of ballot stuffing.

Sanders, who spoke for about a half hour, advanced his boilerplate pitch, promising that Clinton would redress a myriad of ills—income inequality, lack of access to healthcare, crumbling infrastructure, poverty wages and overflowing prisons. He spoke as if the disastrous social conditions in the US were unrelated to the policies pursued by President Obama and the Democratic Party for the past eight years.

Sanders heaped praise on the unions, calling the Local 600 union hall “hallowed ground.” He said nothing about the miserable sellout foisted on US autoworkers last year by the UAW or its role in suppressing the class struggle for the past three decades. Likewise he made no mention of the ongoing struggles of nurses in Minneapolis, teachers in Cleveland and Chicago, Canadian autoworkers or symphony musicians in Pittsburgh and Philadelphia, who are among tens of thousands locked in bitter contract battles.

A little later, at the University of Michigan, Sanders spoke before an audience of several hundred, mainly students. In contrast to the enthusiastic crowds of students he addressed last spring, this campus visit was noticeably subdued. At UM he continued his effort to blackmail young people into voting for Clinton by appealing to hatred of the fascistic Trump.

In none of his appearances did Sanders make any mention of Clinton’s record as a warmonger or the support for her policies by scores of top admirals and generals. He did not warn of the growing danger of a confrontation in Russia over Syria, or note the fact that the Clinton campaign is attacking Trump from the right, by claiming that he is not prepared to counter “Russian aggression.”

Sanders has been assigned the role by the American ruling class of channeling growing opposition to endless war and social inequality back into the Democratic Party. To do this he attempted to tap into the growing interest and support for socialism among workers and young people in order only to demoralize and smother it. 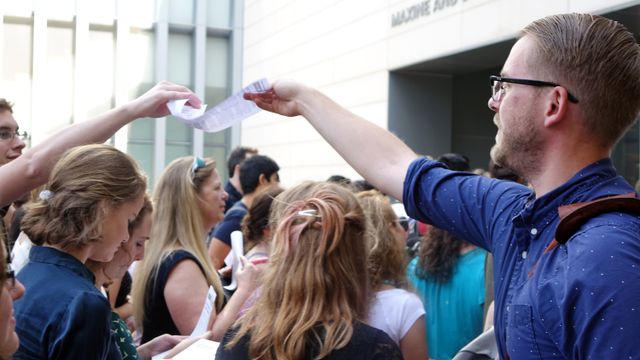 A Socialist Equality Party campaign team distributed information about the party’s election campaign of Jerry White for president and Niles Niemuth for vice president to students attending the Sanders event in Ann Arbor. Niemuth joined the campaign and used the opportunity to talk to young people about the November 5 conference, Socialism vs. Capitalism and War, at Wayne State University in Detroit.

SEP supporters asked one student, Zainab, what she thought of Sanders’ decision to endorse Clinton. “He had to do it, but I don’t agree,” she said. “We shouldn’t play off the fear for Trump to support someone who is almost as bad.”

On Clinton’s record of support for war, Zainab said the US has “caused chaos in the Middle East with billions of dollars lost. It has cultivated animosity and created a vacuum in Iraq, displacing so many families and turning them into refugees. It’s all for money and power, which go hand in hand. We haven’t even gotten over colonialism. Honestly I don’t see a difference between Democrats and Republicans. Clinton is not anti-war. And with Trump, I can’t even understand him.” 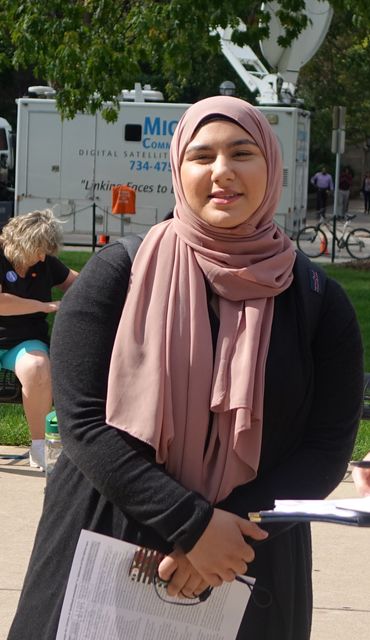 When asked about attending the November 5 conference against war, she said: “It’s a great idea. I don’t even know how to put it in a sentence, but yeah! I’m for it. An international movement would be interesting because there are so many people in the Middle East who are anti-war, who are opposed to the invasions and occupations of their countries. I want to know how we can unite them.”

Another student, Korey, said he was a supporter of the Green Party but was voting for Clinton. “I voted for Sanders in the primary, and I support Clinton because she’ll appoint liberals to the Supreme Court.”

Niemuth noted that Clinton and Trump both represent the financial aristocracy, and that regardless of who is elected the next administration will expand war and intensify the attack on the working class. Korey replied, “I don’t like her positions on the wars. I’m against intervention, and I don’t believe in the occupations, and Clinton’s record has contributed to the crisis in the Middle East. I don’t agree with the US involvement in Syria and I’m also against these drone strikes, but I’m worried about a Trump presidency.”

Another student, Gary, who was originally from England, said, “I’m a socialist. I think everyone should be given a decent shot at life. I think the state should help people. Sanders was the only American political campaign I’ve ever contributed to. I think he had to endorse Clinton.”

A SEP supporter asked him whether there was a contradiction between Sanders’ self-proclaimed “democratic socialism” and his support for the pro-war, pro-Wall Street Clinton campaign. He said, “I don’t like it, but she’s better than Trump. I wouldn’t say I’m entirely anti-war, but I’m anti-unjust wars.” When asked whether any of the US wars of the last 15 years were just, he said: “No. They are not justified.”

Courtney said, “The wars are to get oil. Clinton is a billionaire and she’s in it for the business.”

Her friend Aji said, “Everyone in politics is stupid, and we tend to do things for financial gain.” When Niemuth explained that the wars are not the product of general “greed,” but of the capitalist system, Courtney said: “Oh, I hate capitalism, basically for the reasons I already said. I think socialism would be better.”

Sanders’ campaign for Clinton: A “political revolution” in defense of the status quo
[5 October 2016]