More than 100 Pittsburgh Symphony Orchestra (PSO) musicians and support staff have been on strike for over a week, after unanimously rejecting management demands for a 15 percent pay cut, an end to defined-benefit pensions, and changes in hiring rules that would allow management to cut jobs.

Fort Worth Symphony Orchestra musicians have also been on strike since September 8, seeking to recoup pay cuts ceded in 2010. The Philadelphia Orchestra also struck on September 30, but ended the strike after ratifying a contract two days later that roughly maintains current compensation levels but does not restore concessions given up during its 2012 bankruptcy. These attacks on symphony orchestra musicians mirror those that led to strikes in Detroit (2010), San Francisco (2012), and Spokane, Washington (2012), and a lockout in Minneapolis (2012-2013). 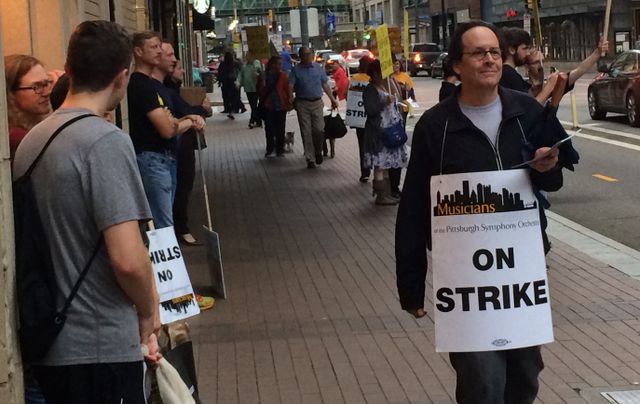 The financial elite in the US and worldwide constantly claim that there is “no money” for the arts, public education, safe drinking water, or any other basic right of the working class. Meanwhile, trillions have been used to finance illegal wars and to bail out criminal banks.

The $1.5 million annual deficit the PSO management cites to justify its concession demands is less than a third the cost of a single Predator drone. The PSO’s entire $32 million annual budget is roughly 1 percent the cost of a single Virginia Class nuclear submarine. Meanwhile, the budget of the National Endowment for the Arts, $147,949,000 in 2016, is less than 30 percent what was in 1979, in real terms.

The PSO has received broad support from workers and artists in Pittsburgh and around the country, with many supporters of the orchestra joining the picket line.

Orchestra musicians have played numerous free concerts at various locations in Pittsburgh. One such concert on Friday evening at Carnegie Mellon University, where many PSO musicians also teach, drew an audience of hundreds, primarily students. Musicians chose to play two simultaneous concerts to ensure no one was turned away.

A WSWS reporting team, including a member of the University of Pittsburgh chapter of International Youth and Students for Social Equality, interviewed striking musicians and supporters at the picket line at Heinz Hall, the home concert hall of the PSO.

Zachary Smith, a French horn player with the PSO, explained the reasons he chose to strike. “This is one of the best orchestras in the world,” he said. “What we have here is a very special thing. You want to attract the best musicians in the world. Pittsburgh has always been a destination. 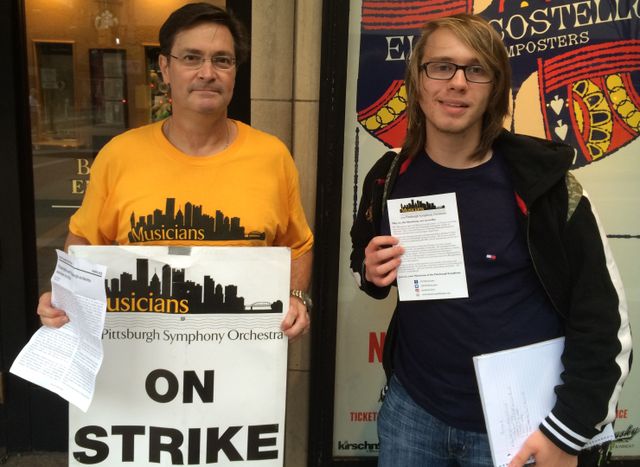 Zachary Smith, a PSO French horn player, and Torin from the IYSSE

“The management are all corporate restructuring guys, but we’re not a corporation. I do think it’s a real problem. They threatened earlier this week to replace us with replacement musicians.”

“You’re not going to trim the Mona Lisa to fit it into a smaller frame, but that’s what they’re trying to do here. You can’t do that. This is a great orchestra because of its continuity and cohesion. It’s in the DNA, built up over the years.”

Mark Huggins, the associate concertmaster of the PSO, explained the reasons he was on strike. “We’re very committed to maintaining this great institution,” he said. “When I came to the Pittsburgh symphony, the community wanted and supported a world-class symphony orchestra. It attracts the best all over the world. I came from Europe. We have musicians from China, Venezuela, Asia.”

Brett Rutherford, a poet, publisher and editor, spoke of his deep connection to the PSO: “This is my first orchestra. I came as a high school student to hear the Pittsburgh symphony. William Steinberg was my first conductor. I just retired back to Pittsburgh, and one of the main reasons to be here is this orchestra. 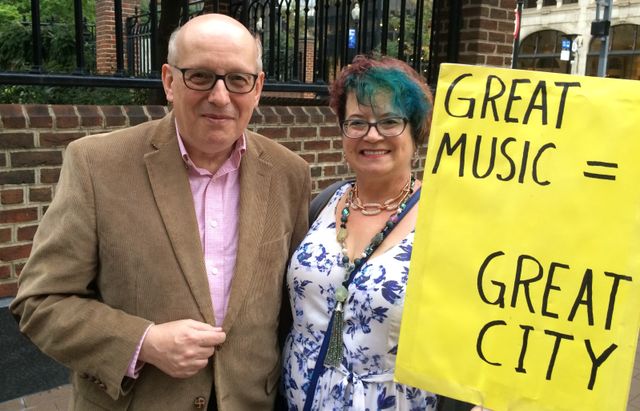 “They want to start cutting down the number of players. A lot of places are doing that. In Minneapolis, they’re practically a chamber orchestra at this point, and once you start giving up players, they never rehire them.

“This is equivalent to the use of adjuncts in academia. You let your orchestra be whittled down, and then you have to hire pickup players when you do a really big concert.

“I think it’s great that the players are holding forth for the full complement. Don’t stab each other in the back. It’s all of us or none of us. A full orchestra is 102-104 people, and if you don’t have that, you can’t play the full repertoire.”

Peachesz Zukowski, a local artist, described the enormous impact the PSO had had on her life. “My husband had stage four cancer,” she said. “They told him he had three months to live. The concerts, the symphony, the music literally breathed life into him. He lived 10 years, and every single concert he looked forward to, right up until the last week. It really gave him the ability to fight the cancer. He was a biker, a truck driver, and a mover, a big tough guy. He had eight chemotherapies.

“My husband and I moved to Pittsburgh because of them [the PSO].”

Speaking of PSO musicians, Peachesz continued: “I don’t think people realize how much they do, just to present a good performance. It’s really disappointing to see them being treated this way. When I hear their music, I think that a lifetime of dedication is something that should be rewarded.

“I know people feel like they make so much money, and meanwhile everybody’s struggling on like 10 dollars an hour, but they don’t get what they have to go through. I see them. One of my friends is a member of the orchestra, and her entire life is wrapped up in the music. The amount of schooling she had to go through, the cost of the instruments. I just saw a bow, one bow that was going for $125,000. Their lives are so wrapped up with it.

“My girlfriend has been in the orchestra for 15 years. You can’t have a normal life. I have to catch her in between practice and performances. It’s so intense. I have immense respect for them.

“I think it took a lot of insight for them to go on strike, because I think they sense the way that they’re being treated is disrespectful.

“People don’t realize how important it [culture] is. It elevates you, it takes you from the ordinary to the sublime. What other way could somebody transcend chemotherapy? He was in so much pain, but when he heard the music, he would just close his eyes, he was gone into another dimension.”