Socialist Equality Party vice presidential candidate Niles Niemuth spoke to students Monday at Wayne State University in Detroit about the party’s presidential campaign and the November 5 conference, Socialism vs. Capitalism and War, being held on the campus.

Niemuth encountered strong opposition to the war plans of the US ruling elite as well as disgust with the campaigns of both Democrat Hillary Clinton and Republican Donald Trump. Students reacted in particular to the spectacle of the Clinton-Trump debate held Sunday night, where the big business candidates traded insults while avoiding any serious discussion of the issues confronting working people and students.

Niemuth’s campaign on campus coincided with a visit to Wayne State that afternoon by Clinton, who is desperately seeking to rally support from students. In her remarks, Clinton treaded lightly on the question of her support for the US military actions in the Middle East, including the looming confrontation with Russia over Syria, while advancing a series of empty and vague promises, which, judging from the audience applause levels, even her supporters do not take very seriously. 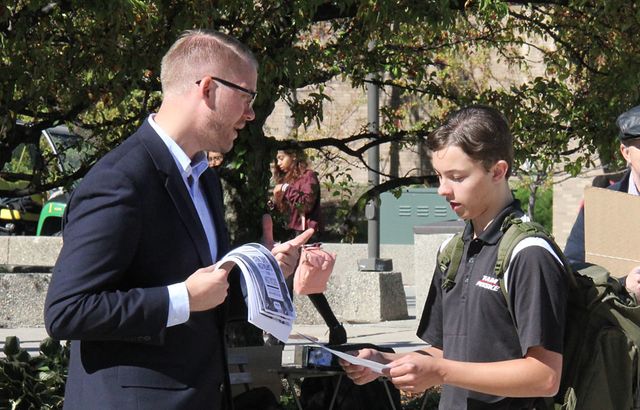 Danny, a Wayne State student, told Niemuth, “From what I can see Clinton and Trump are not focusing on the big picture. If there was to be a war they could start calling up people off the draft list. That would directly impact me since I am age 20 and would likely be among the first to go.”

Another student also expressed her disgust with the Clinton-Trump debate. “It was all a diversion,” she said. “Wars are all about the money. The United States went into Vietnam to preserve a French colony, and 58,000 American soldiers were killed.”

Megan said she had supported Bernie Sanders in the Democratic primary campaign against Clinton. She told Niemuth she was interested in the November 5 conference at Wayne State. “When it comes to things I hope to hear in the elections, I feel more aligned with socialist values. I would like to see more people realize that their values align with socialism.

“The discussions I have had with other young people is that they want to see a candidate that is more progressive, more aligned to socialism,” she said, indicating she did not like either Clinton or Trump.

Niemuth explained that while millions of young people supported Sanders based on his claim to be a “democratic socialist,” he was in fact a supporter of capitalism, demonstrated by the fact that he had now endorsed Clinton. “We are in favor of the working class taking power and reconstituting society on the basis of production for human need, not private profit,” he said.

A student from Pakistan said he had been disgusted by the debate Sunday night. “It was all based on personal attacks. I would like to see the candidates talk about the jobless rate and issues like the killings of African Americans by the police.”

He said he strongly agreed with the need to oppose war. He was disturbed by the prospect of a war between India and Pakistan, but even more concerned with developments in the Middle East. “If it goes to the point of war between the US and Russia over Syria that would be a catastrophe. I strongly believe we need to build an anti-war movement.”

Niemuth said, “The US wants to control the oil and keep it out of the hands of Russia and China. We call for the dismantling of the US military machine. That requires the building of a political movement to unite the working class.”

Two students from India, Rashmani and Banipreet, said they were appalled by the danger of war in South Asia between nuclear armed India and Pakistan and both registered for the conference. 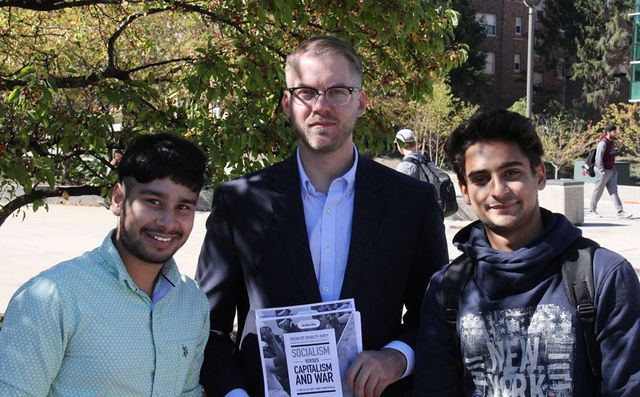 Niemuth explained, “We are fighting to unite workers in India, Pakistan, Sri Lanka and throughout Asia against capitalism. Workers in the United States, Russia, China, India or Pakistan have no interest in these wars. These wars are a product of the conspiracies of the ruling elites against the working class.”

Another student who identified himself as a libertarian and a registered Republican told the socialist candidate that he had been in the US military and had served in Afghanistan. “I don’t think it was the right thing to do to occupy the country for 15 years,” he said. “At least half the people there didn’t want it.”

Niemuth said, “The invasion wasn’t about helping people. President Obama promised to end the wars when he was elected, but instead the wars expanded and are continuing.

“Now, no one is being asked if they want to go to war with Russia. We are opposed to that. Both the Democrats and Republicans are right-wing parties that support the interests of Wall Street. The socialist movement is the only force that is genuinely opposed to war, which means opposing capitalism. We are not oriented to the ruling classes but the working class.”

Amber told SEP campaigners that she had previously supported Sanders but would not be supporting Hillary Clinton. She called the arguments being advanced to vote for Clinton, “An insult.” She continued, “‘Hillary Clinton is not Trump’—It’s a terrible argument.” She noted that the Clinton campaign had even resorted to McCarthyite-style baiting of Trump over his alleged ties to Russia.

“If Russia hacked the Democratic National Committee, I don’t care. The information that was revealed was more important than the question of who hacked it,” she said, referring to further revelations about Clinton’s intimate political ties to the Wall Street oligarchy.