Thousands of plantation workers are continuing a protest campaign that began on September 27, demanding an increase in their daily wage to 1,000 rupees ($US6.86). They have defied a call by the Sri Lankan government and the trade unions on October 5 to stop their actions. The present daily wage with allowances of a tea-plucking worker is just 620 rupees. 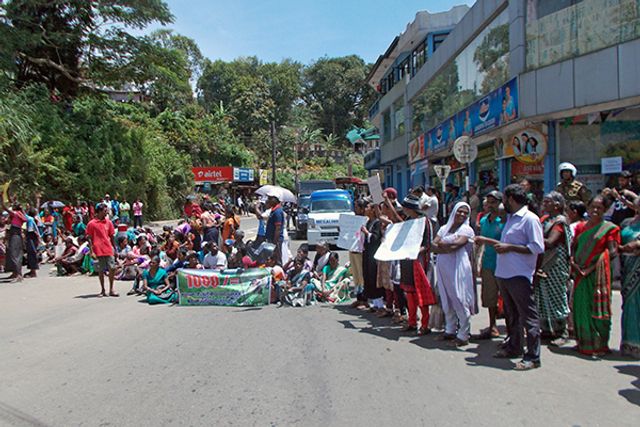 Pickets and demonstrations have stopped traffic in towns and cities across the Nuwara Eliya, Badulla and Ratnapura, Matara, Galle and Colombo districts. Rubber estate workers at Awissawella and Mathugama in the Western Province blocked the main road for nearly two hours.

The government has mobilised the police to ban or disperse protesters, worried that their agitation will encourage struggles by other sections of workers and the poor against the mounting attacks on living conditions and social rights.

Protesting workers have opposed a wage offer made by Labour Minister W.D.J. Seneviratne, backed by trade unions and some plantation companies. According to the Sunday Times, the offer would raise the wage to 730 rupees for three days a week, with the tea plucking target increased from 18-20 kilograms a day to a backbreaking 24 kilograms.

The daily wage on the other three days would remain at 500 rupees, with a tea plucking target of 15 kilograms per day. For any additional harvest, workers would be paid at the rate of 26 rupees a kilogram.

Plantation workers have been kept in the dark about what is happening to their wages. The closed-door discussions between the unions, employers and the government only indicate that a sharp workload increase is being prepared. This exercise is so anti-democratic that the agreement’s clauses will be revealed to workers only after the unions and the Employers Federation have signed it.

Ceylon Workers Congress (CWC) president Muthu Sivalingam claimed that only a few workers were protesting, but most were obeying the union. On the contrary, workers from several estates in plantation districts have participated in protests, defying the unions. 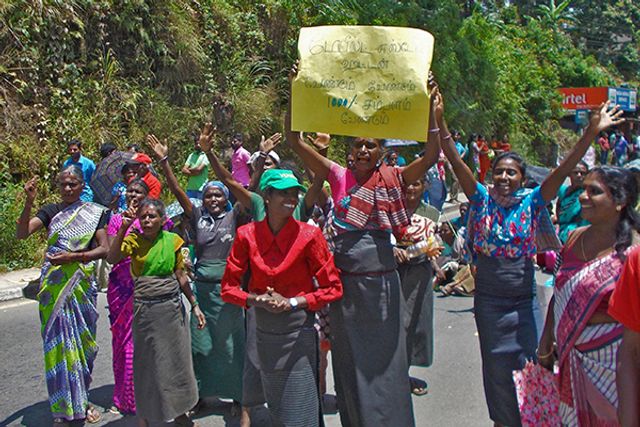 About 2,500 workers from three Bogawanthalawa estates—1,500 at Kotiyagala, 500 at Bogawana and 500 at Selvakandai—have been on strike since October 4, resisting appeals to halt their protests. Workers in these estates are demanding not just the 1,000-rupee daily wage, but also 18 months’ arrears since the end of the last collective agreement and six days work a week.

Balakumar, a worker at Kotiyagala, said the CWC, Lanka Jathika Estate Workers Union (LJEWU), National Workers Union (NUW) and Up-country People’s Front (UPF) had branches in his estate. They all asked workers to stop the strike. Balakumar commented: “With high cost of living, even 1,000 rupees is not enough. If these trade unions refuse our demands and sign the collective agreement, we would stop subscriptions for the trade unions.”

K. Shanthakumar, from the Drayton estate at Kotagala, explained the harshness of the productivity-based wage system, which has been implemented already by some estate managements. “We are working under brutal working conditions,” he said. “In the past three months the working days of many workers were reduced because they did not reach the target of 14 kilograms.

“If we have not reached the target, that day is counted as a half day of work. In this manner, the management cut off the days and we will not be able to complete the 19 days’ work [per month] that is needed for the incentive payment. As a result, last month I lost 3,400 rupees. The trade unions do not oppose these draconian cuts and they are collaborating with the management.

“Last year, the CWC told us that the company agreed to pay around 800 rupees a day but the union was insisting on 1,000 rupees. Now they have dropped that demand and after 18 months they agreed to 730 rupees.

“The Tamil Progressive Alliance, a combine of the NUW, DWC and UPF, said they were organising a protest on October 6 at Talawakelle demanding 1,000 rupees, but after the minister of labour announced a 730-rupee daily wage, they cancelled the protest. All the trade unions cheated us.”

Commenting on the SEP’s call for workers to build action committees and fight for a socialist program, Shanthakumar said: “Now plantation workers are coming onto the streets to fight for their wages without leadership. I agree workers must form action committees to continue their fight, breaking from the trade unions. I also very much agree that the action committee leadership must be democratically elected.”

The plantation owners, supported by the media and the government, are conducting a propaganda offensive, claiming they cannot pay any increase due to declining tea exports, especially to the Middle East and Russia. Instead, they are pushing for the new system, tied to output.

Planters Association chairman Sunil Poholiyadde told the media: “They [plantation companies] had agreed to the increase [with the labour minister] despite being unable to afford such increases due to low commodity prices, as they view the move as the first step toward a productivity-based wage formula.”

With the cost of living escalating due to the devaluation of the rupee and increased taxes, workers face grave difficulties to survive. Hence this revolt against the plantation companies, the government and the trade unions.

S. Chandrakanthan, from the Mayfield estate at Kotagala, who was participating in a protest at Fruit Hill junction, Hatton, said: “We reject the wage of 730 rupees per day proposed by the company. The government is very far from our demand. We want 1,000 rupees per day. With the present cost of living this is also not enough for us.

“All the trade unions have cheated us. We are facing starvation. We can’t educate our children with this wage. We voted to bring this government to power but it ignores us. Since all the trade unions betrayed us, our workers decided to leave the trade unions.” Chandrakanthan added that in future elections “we will not vote for anybody.”