The Rosetta spacecraft transmitted its last image back to Earth on Friday, September 30, a mere ten seconds before a guided crash landing onto Comet 67P/Churyumov-Gerasimenko. It marks the end of a space mission that combined two firsts: the first spacecraft to orbit a comet and the first mission to send a module, the Philae probe, to land on that comet’s surface. 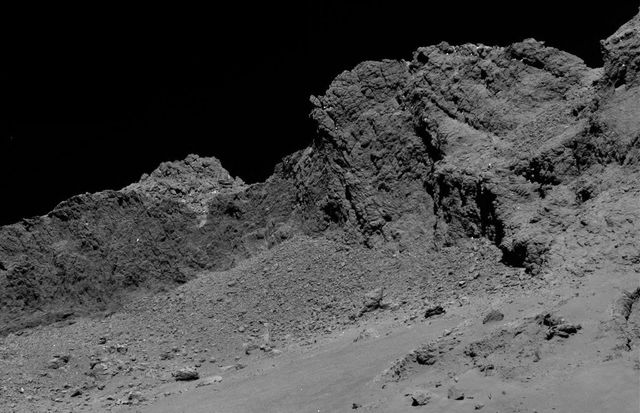 This image was captured during Rosetta's descent into comet 67P/Churyumov-Gerasimenko. The scene is 600 meters across, taken from just 16 kilometers above the comet's surface. Credit: ESA, Rosetta, MPS, OSIRIS; UPD/LAM/IAA/SSO/INTA/UPM/DASP/IDA

Rosetta’s final moments were designed to gather as much information as possible about Comet 67P. Now that the comet is traveling away from the Sun, Rosetta’s 32-meter-wide solar panels have been providing less and less power, reducing its ability to take and transmit data. Rather than letting the spacecraft slowly die, Rosetta’s controllers decided to stop adjusting the probe’s orbit and sent it into a 19-kilometer free fall.

This allowed eight of the eleven instruments onboard Rosetta to take extremely detailed measurements over the last two days of the spacecraft’s life. Planetary scientists were particularly interested in the ability to do high-resolution ultraviolet spectroscopy, using reflected light to determine the chemical composition of the comet’s surface. Other instruments took readings on the dust, gas and plasma just above the comet’s surface, which provide knowledge about how the comet interacts with heat from the Sun.

By all accounts, the final maneuver of Rosetta was a success. In the last images taken by Rosetta, objects only a centimeter across can be seen, raising new questions about the formation and evolution of Comet 67P. Some of the gas, dust and plasma readings are more detailed than what was returned by the Philae lander, with Rosetta’s more powerful instruments compensating for the shorter time they had to study the environment near the surface of the comet. 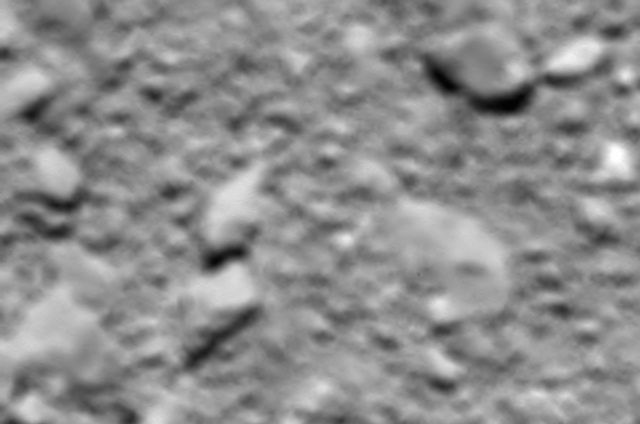 This is the last image of the Rosetta mission, taken just ten seconds before the spacecraft set down. Objects only a centimeter across can be seen. Credit: ESA, Rosetta, MPS, OSIRIS

Rosetta was launched by the European Space Agency on March 2, 2004 as one of the ESA’s Horizon 2000 cornerstone missions. It was first conceived nearly 20 years earlier, after the European Space Agency sent the Giotto spacecraft to fly by Halley’s Comet in 1986. After that mission returned a slew of new information about the composition of comets, it was determined that follow-up missions to different comets would be necessary. Astronomers wanted a longer-term mission that would study a comet up close as it approached and then receded from the Sun, the time when its interaction with solar radiation would be most intense.

Comets, similar to asteroids, are remnant material left over from the formation of the Solar System. They are made up of ice, dirt and rock loosely held together by gravity. They start shedding if their orbit takes them close enough for the heat of the Sun to start ablating material away, forming a cloud and tail that can sometimes be seen from Earth. This cloud is what researchers were most interested in studying, as it contains material from when Earth and the other planets were slowly emerging 4.6 billion years ago.

One of the bigger questions scientists were hoping to answer with the Rosetta mission is how water came to be on Earth. The molten ball of iron, nickel and rock in the early Solar System that would eventually become the Earth and the Moon was far too hot to contain water, and so the water that did eventually arrive on Earth had to be delivered somehow. One hypothesis is that comets from that era smashed into Earth, bringing what today forms the oceans.

However, this may not be the case. One of the more striking and unexpected results from Rosetta’s data is that the chemical signature of the water from the comet does not match that of Earth, meaning that it was not a comet like 67P that brought water to our planet. It is certainly still possible that comets brought water to Earth (there are many millions of comets, each with their own chemical signature, and only one has been closely studied) but now other explanations of how water came to primordial Earth are being given greater consideration. 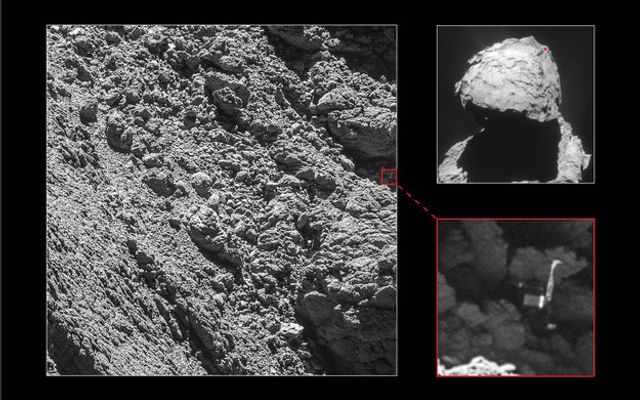 Rosetta and Philae also yielded a great deal of information about the organic compounds contained on and within Comet 67P. Similar to water, some of Earth’s basic building blocks of life—particularly nucleic acids and amino acids—are thought to have been delivered to Earth by collisions with comets. Before it ran out of power, Philae detected sixteen organic molecules, including four never before seen a comet, but only one amino acid (glycine), so it is unclear just how much comets contributed to providing these compounds to early Earth.

A further question was raised when Philae failed to detect a magnetic field coming from the nucleus of Churyumov-Gerasimenko, as it descended to the comet’s surface. In our current understanding of the formation of the Solar System, magnetic fields play a significant role, one that should have left an imprint in comets, as they have remained essentially unchanged since then. This suggests that either magnetism did not do what was thought, that Comet 67P has a peculiar history or—as is often the case in science—that there is a third solution that will become more apparent as more data is analyzed.

The Rosetta mission also provided a number of technical insights for future space missions, both to other comets and elsewhere. One of the largest hurdles was simply getting to Comet 67P. As a result of budget cuts, Rosetta did not have the necessary on-board propellant to quickly match velocities with its target. Rather, it was forced to take a series of highly complex orbital maneuvers, involving four gravity assists, that took ten years to complete before it finally was able to start doing scientific research.

It was also, of course, the first mission to have a probe perform a soft landing on a comet. The Philae landing was a scientific achievement of the highest order and has shown what can be achieved when human creativity and ingenuity are put towards understanding nature rather than the pursuit of profit. At the same time, if budget restraints had not forced the Philae lander to be scaled down, that craft would have simply had thrusters to land on Comet 67P (rather than relying on harpoons and ice clamps) and would have been able to perform a great deal more science.

Rosetta will be remembered for years to come. It harnessed the gravity of several planets to catch and study a comet and sent back a myriad of data that will make possible a clearer picture of the origins of water and the origins of life on Earth. So far, scientists have only analyzed about five percent of this data, meaning that while great deal has been learned about comets, 67P in particular, and the Solar System in general, more is waiting to be discovered.