“How can you have a fair election if you don’t have the full information?”

A World Socialist Web Site Autoworker Newsletter reporting team spoke to workers at the Fiat Chrysler minivan plant in Windsor, Ontario Friday to get reactions to the tentative contract settlement announced earlier in the week by Unifor, the Canadian auto union. Workers reacted strongly to the terms of the agreement, patterned on the sellout contract rammed through at General Motors.

The call by the WSWS Autoworker Newsletter for the publication of the full contract details before the vote, with adequate time provided to study the agreement, was warmly received.

Shift break at the FCA plant in Windsor, Ontario

A young worker said, “They really do want to push this through. That’s why they’re not showing the contract. I’m ready to vote ‘no’.”

Another worker responded tersely to the call by the WSWS for workers to have access to the full contract details, “I know. That’s BS.”

Peter, a worker with 16 years seniority said, “I would hope we get a chance to see the full language. If we don’t, trust in the union will go down. Right now all we are getting is bits and pieces.”

Carey, a worker with less than one year at Fiat Chrysler said, “They are doing the same thing here they did at General Motors; they are giving just the highlights. How can you have a fair election if you don’t have the full information? They will give us just enough to get a ‘yes’ vote, and then we will find out the rest later.”

Workers were particularly upset with the attacks on young workers reportedly contained in the agreement. The deal maintains the 10-year “grow-in” period for young workers who currently start at only a little more than one half of standard base wages. It also strips new hires of the last vestiges of a defined benefit pension. 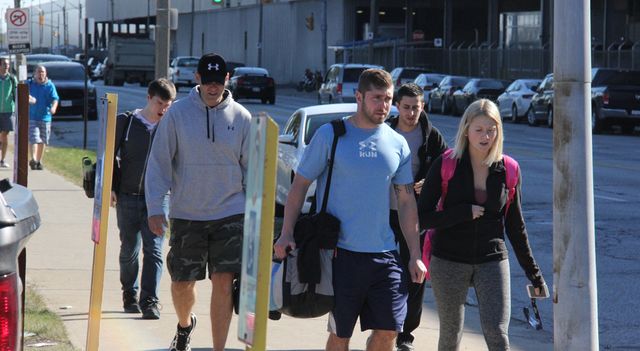 One worker said, “New hires won’t have benefits when they retire, that’s bad.”

A new hire added, “I am fortunate I still live at home. It is tough to make it on the wages. It is hard to save money. It would be tough for someone with kids.”

“Ridiculous,” was Peter’s reaction to the details so far released by Unifor. “I think the biggest thing is that it takes new hires 10 years to get to the top pay, and they will have no pension, which was one of the big reasons for having the union in the first place. For some of us, that will be the main reason to vote ‘no.’”

Carey said that many younger workers came to work at Fiat Chrysler because the pay looked relatively attractive given the low wage jobs that are so prevalent. “I know what else is out there,” she said.

However, she added, the working conditions are brutal for those inside the plant. “I am definitely earning my money,” she said. “There are not many people on my line who are physically capable of doing what I do. I lost 20 pounds right away when I started working here. I have hurt myself already once.

“We get crap jobs and crap pay,” she said of the new hires. “That is definitely pitting workers against each other.”

She called the 10 years that new hires had to wait to reach top pay, “a bit of a crapshoot.” In four years, she added, “they will revisit the contract.”

“Is the union for the company or for the workers? I wonder.”

Veteran workers who stopped to speak to the WSWS Autoworker Newsletter also expressed opposition to the settlement. One older worker said, “We get two percent at the beginning and two percent at the end. Come the next contract negotiations they will say, ‘you just got a raise, we aren’t giving you more.’”

Peter said, “Many workers feel that because of all the concessions we gave up, we should get more of a raise. We took a lot of cuts in the past, so now that things are good, pay us back.”

“It is just good for the guys on top. The workers are the ones putting that money in their pockets.

“They don’t realize the damage we are doing to our bodies. I have bone spurs from working here. People who say we make too much money should try working on the line. What’s wrong with making good money if we work hard?”

He ridiculed the so called “job guarantees” touted by Unifor. “The $325 million investment they promise is just a band-aid. In our plant they put in a paint shop and then dismantled it and moved on.”