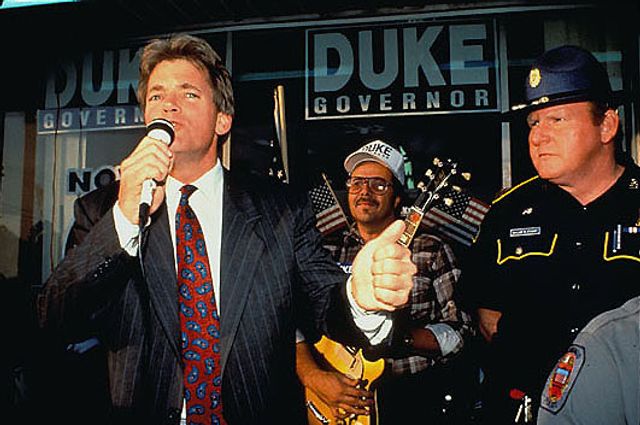 October 19, 1991, ex-Ku Klux Klansman David Duke finished second in a primary election for governor of Louisiana, winning a place in the November 16 runoff. The result revealed a further shift to the right in capitalist politics and the utterly reactionary character of the AFL-CIO bureaucracy’s alliance with the Democratic Party.

Campaigning on the basis of thinly veiled racism and right-wing populist demagogy, Duke took 32 percent of the vote, narrowly behind the 34 percent for former three-term Governor Edwin Edwards, a Democrat. Incumbent Governor Buddy Roemer, running for re-election after switching parties to become a Republican the previous March, came in third, with only 27 percent.

This second-place finish for Duke followed his US Senate campaign the previous year, when he won 44 percent of the vote in a contest against incumbent Democrat J. Bennett Johnston. Duke had gained widespread notoriety after winning a seat in the state legislature in 1989 in a special election.

Duke was a white supremacist and admirer of Adolf Hitler. A former national grand wizard of the Knights of the Ku Klux Klan, he was also the founder of the neo-Nazi National Association for the Advancement of White People.

Edwards, the Democratic candidate in the runoff, was a notoriously crooked stooge of big business who narrowly survived two well-publicized corruption trials. He had been governor for 12 of the previous 20 years and was widely hated as a symbol of the corrupt capitalist political establishment in Louisiana.

The relationship between Edwards and Duke was symbolized in the case of Gary Tyler, a young black man, then 32, who had been held in state prisons on a frame-up murder charge since he was 15 years old. David Duke led the racist mobs that backed the local judge and sheriff who railroaded Tyler to prison in 1974. Edwards, as governor, repeatedly blocked all efforts to overturn the frame-up conviction or grant Tyler a pardon. 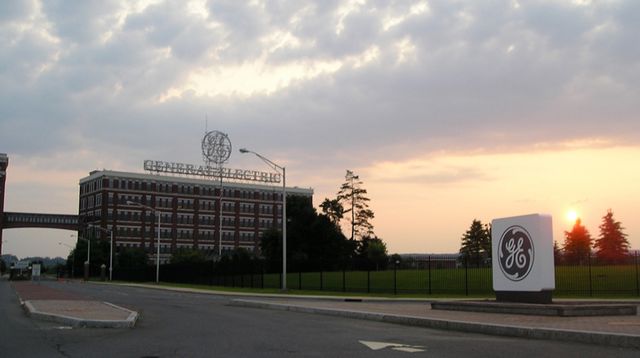 On October 17, 1966, members of three national unions struck five General Electric plants, after their local contracts expired without agreements. In Schenectady, New York 12,000 members of the International Union of Electrical workers walked out after rejecting the national contract backed by the union bureaucracy. GE workers also struck at plants in Utica and Albany, New York, and Evendale, Ohio. GE workers at plants in Warren, Michigan and Ashland, Massachusetts continued strikes that began October 3. A total of 27,650 workers were involved in the action, which, in the midst of the Vietnam War, included plants involved in military production.

The strikes erupted following the end of a two-week “cooling off” period requested by President Johnson and accepted by the trade union bureaucracy. GE workers in Warren and Ashland stayed out on strike in defiance of both President Lyndon Johnson and the AFL-CIO bureaucracy. Another strike by GE workers in Louisville, Kentucky was narrowly averted only after the bureaucracy succeeded in gaining a contract extension.

Johnson relied on the trade union bureaucracy to prevent a full-scale walkout by all 120,000 workers at GE, a major defense contractor. The government held in reserve the threat of a Taft-Hartley injunction to end the strike, which it claimed threatened to disrupt vital supplies of war materiel to US forces in Vietnam. 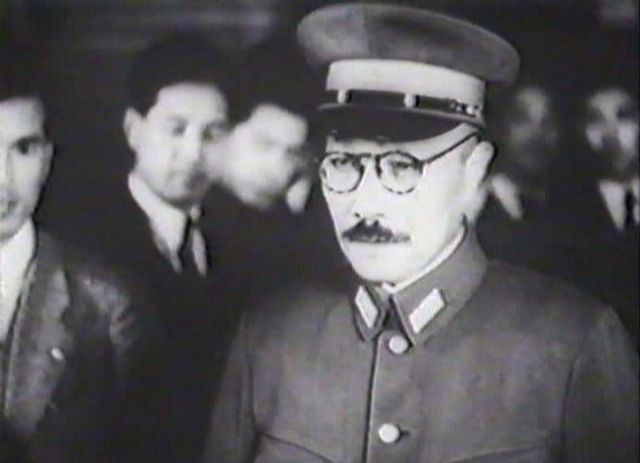 On October 17, 1941 the third cabinet of Prince Konoye collapsed after negotiations between Japan and the United States failed to reach any compromise over conflicting imperialist interests in Asia and the Pacific. One day later, General Hideki Tojo formed a new cabinet, which prepared for war with the United States.

Japanese imperialism, which had made a belated appearance behind the European powers and America, found British, US and Dutch imperialism unwilling to share the colonial spoils in the Far East. For four years Japan had been fighting a war of conquest against China, but had been unable to derive any economic gain from its military victories. Japan’s invasion of French-controlled Indochina and threat to move into the Dutch East Indies had led its imperialist rivals to freeze Japanese assets and block the shipment of oil and essential materials.

The Japanese economy now stood two years away from complete collapse, it was believed. Konoye had attempted to find terms acceptable to the US that would allow Japan to have a sphere of influence in the Far East, but US imperialism had no interest in coming to terms with Japan. The Roosevelt administration saw in Japan’s dilemma an opportunity to get into World War II and fight directly for its own interests.

The longer the United States dragged out negotiations, the more time was given to military preparations in the Pacific. For Japan, the longer it waited, the weaker it would stand in relation to the virtually unlimited increase in US military power. Hence, the Tojo cabinet was formed to dispense with negotiations and prepare for war.

The United States, having cracked the Japanese communications code, was well aware of the crisis that was shaking Japan’s government and economy. Henry Stimson, US Secretary of War, summed up the tactic American imperialism would follow in relation to Japan: “The question was how we should maneuver them into the position of firing the first shot...” 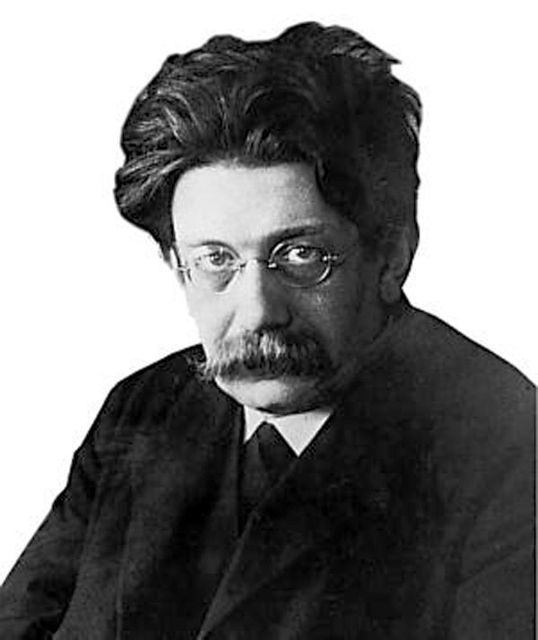 On October 21, 1916, Friedrich Adler, a leader of the Social Democratic Party of Austria, assassinated Prime Minister Karl von Stürgkh in a politically bankrupt act of terrorism, which flowed from the Austrian SPD’s turn away from a socialist perspective oriented to the working class.

Friedrich Adler was the son of Victor Adler, the “father” of Austro-Marxism, a trend in international social democracy that sought to maintain a veneer of Marxist theoretical orthodoxy at the same time as it adapted to the Austro-Hungarian state and its participation in the imperialist world war that had erupted in August, 1914.

Leon Trotsky, leading Russian revolutionary, described the political physiognomy of Austrian social democracy. He wrote, “Around Victor Adler, the first and greatest victim of his own method, grouped the mediocrities, the lobby politicians, the routinists and the careerists to whom there was no need, as there was for their leader, to blaze out a path through the wearying chaos of Austrian politics from revolutionary conceptions to complete skepticism in order to remain sworn enemies of any revolutionary initiative and of mass action. The miserable prostration of the official bosses of Austrian socialism revealed itself at the outbreak of the war in the form of an unbridled servility towards the Austro-Hungarian state.”

As leader of Austrian social democracy from 1911, and editor of its theoretical publication, Friedrich Adler adopted a stance towards the war that owed more to pacifism and outraged moralism than revolutionary internationalism.

Trotsky later contrasted Adler’s act with the stand taken by Karl Liebknecht, the German socialist leader, who had led a mass demonstration against World War I in May 1916. Trotsky wrote, “Friedrich Adler is a sceptic from head to foot: he does not believe in the masses, or in their capacity for action. At the time when Karl Liebknecht, in the hour of supreme triumph of German militarism, went out to the Potsdamerplatz to call the oppressed masses to the open struggle, Friedrich Adler went into a bourgeois restaurant to assassinate there the Austrian Premier. By his solitary shot, Friedrich Adler vainly attempted to put an end to his own scepticism. After that hysterical strain, he fell into still more complete prostration.”

Adler was released from prison as a result of the collapse of the Hapsburg Empire in 1918. He moved rapidly to the right, and was an opponent of the Third International, which was founded in the aftermath of the Russian Revolution to fight for an international, revolutionary and socialist movement of the working class.