ExoMars mission has both success and failure

The joint European and Russian Trace Gas Orbiter (TGO) spacecraft successfully entered orbit around Mars on October 19 after traveling 496 million kilometers, performing a braking maneuver that lasted two hours and 19 minutes. It is the first phase of a joint two-stage mission between the European Space Agency and the Russian space agency, Roscosmos, to investigate any possible chemical and biological signatures of life on Mars.

From the latest telemetry received, the orbiter’s instruments are all operating as expected, as it joins the growing fleet of spacecraft orbiting the red planet.

ExoMars is designed to complement and expand upon the previous and ongoing missions that are investigating whether or not life has ever existed on Mars. One of the key pieces of information is the amount of methane in the atmosphere. The Trace Gas Orbiter will study this in detail. 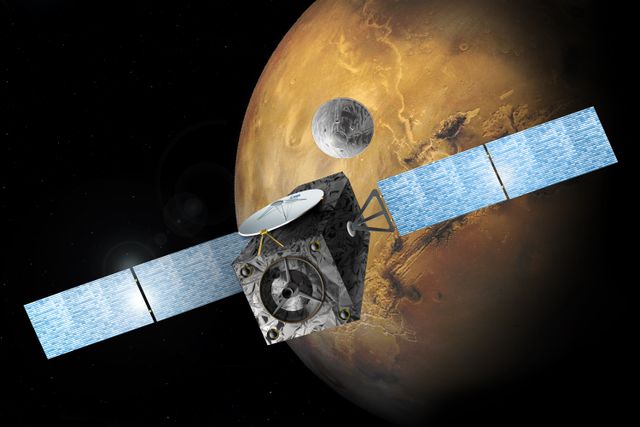 Artist conception of the Schiaparelli probe as it separates from its mothership, the Trace Gas Orbiter, and prepares to land on Mars. Credit: ESA

While methane has been detected by previous Mars missions (such as the ESA’s Mars Express), there has never been a dedicated mission to map the methane content and variability in the planet’s atmosphere. Moreover, there is no clear explanation as to how methane even persists in an atmosphere that is very thin and wholly unprotected from solar radiation. Methane molecules on Mars are only expected to last 400 years before breaking down.

There are two proposed solutions to this question: the first is a geological process called serpentinisation, which would involve olivine-rich rocks with liquid water well below Mars’ surface, where the environment is warmer and perhaps volcanic. The less mundane answer, however, is that the methane is being produced by pockets of microorganisms below the surface. On Earth, a significant amount of methane is produced by living creatures as a byproduct of digestion. It is possible that something similar is happening within hidden caves on Mars.

Data from TGO is expected to at least partially uncover the origin of Mars’ methane. The instruments aboard the spacecraft exceed all previous detection capabilities by three orders of magnitude. Furthermore, they are also capable of differentiating between different types (isotopes) of both methane and water, which is necessary to determine whether those molecules come from geological or biological processes.

The success of TGO was marred, however, by the loss of contact with the Schiaparelli probe. Like the ESA’s previous successful mission to Mars, Mars Express, TGO arrived with a lander, one primarily designed to test landing technologies for the second part of the mission—a combined stationary platform and rover—planned for a July 2020 launch.

What happened to the probe is only partially understood. Schiaparelli was successfully deployed from TGO while the spacecraft was still using its rockets to enter Mars’ orbit, the first time a simultaneous orbital insertion and landing have been attempted. Data relayed to Earth indicates that the heat shield held and the probe’s parachute deployed as projected. Events began to diverge, however, after the heat shield and parachute were ejected and the lander prepared for powered flight.

Like NASA’s Curiosity rover, the Schiaparelli lander was designed to perform its final descent with a series of rocket thrusters. At two meters above the ground, the thrusters were to shut off, dropping the lander a short distance with the fall cushioned by a crushable structure designed for that purpose. However, there is only data of the thrusters firing a few seconds after separation from the parachute. At this point, 50 seconds before landing, contact was lost. 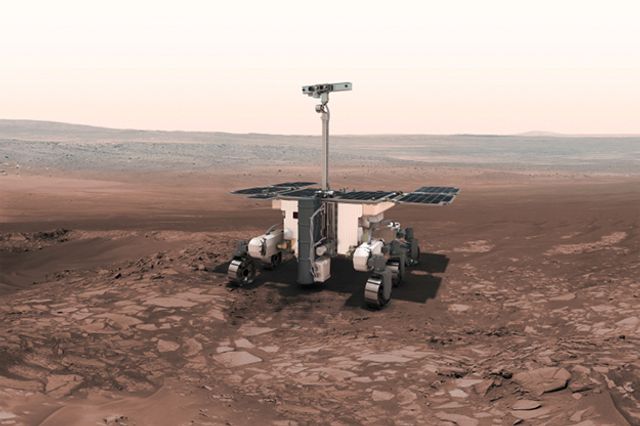 A computer rendition of the ExoMars 2020 rover on the Martian surface. Credit: ESA

Efforts have been mobilized across the world to find the lost lander. The entire fleet of spacecraft orbiting Mars—the ESA’s Mars Express and Trace Gas Orbiter, India’s Mangalyaan and NASA’s Mars Odyssey, Mars Reconnaissance Orbiter and MAVEN—are involved in the search. In the initial stages, the ESA also employed India’s experimental Giant Metrewave Radio Telescope to search for Schiaparelli. So far nothing has been found and the current hypothesis is that the thrusters prematurely deactivated at an unknown altitude, resulting in Schiaparelli crashing into the surface of Mars.

There is a certain irony in the international efforts to locate the missing lander. Schiaparelli was designed as a proof of concept for landing on Mars only because Europe has yet to do this. The first soft landing on Mars was performed by the Soviet Union in 1971, followed by the US in 1975. In the past two decades, NASA has successfully put a series of landers and rovers safely on Mars: Sojourner (1996), Spirit (2003), Opportunity (2003), Phoenix (2008) and Curiosity (2012). Two of those, Opportunity and Curiosity, are still performing science from an average distance of 225 million kilometers from Earth.

Despite the assistance that could have been provided to ExoMars, budget cuts from the Obama administration forced NASA to cancel the project in 2013. One has to wonder if some of the motivation to end US involvement in the project spawned from the growing geopolitical tensions between the US, Europe and Russia in 2013 that culminated in the US-backed right-wing anti-Russian protests and coup d’état in Ukraine in March 2014.

The fact that Europe has had to learn how to land on Mars largely independently of the US also brings to mind the Chinese lunar rover Yutu. Rather than being able to learn from space programs that have already landed on the Moon (NASA and Roscosmos), Chinese scientists were forced to reinvent the wheel, developing whole new technologies to explore the surface of the Moon robotically.

Though the first phase of the ExoMars was only partially successful, it is still a welcome testament to the power of rational thought, scientific planning and the very human urge to understand the material world. It is, at the same time, a lesson on the benefits of collaboration across national boundaries, although mainly in the negative, with international cooperation beginning only after the failure to overcome such divisions produced an apparent disaster.