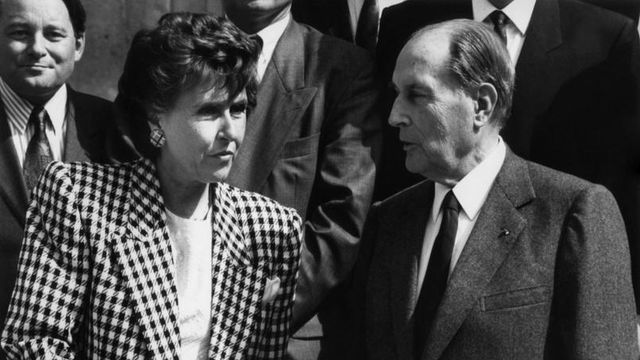 This week in 1991 saw a growing strike wave shake the right-wing social democratic regime of President François Mitterrand and Prime Minister Edith Cresson. The explosive character of the movement in the French working class became clear in the aftermath of the attack on a nurses’ demonstration by the paramilitary Mobile Guard in which two nurses were injured. The Mobile Guard fired tear gas canisters into the demonstration and knocked nurses down with water cannon.

The nurses, who had been waging a national campaign of strikes and demonstrations demanding more staff, better conditions and higher wages, responded with a mass march of 40,000 in the streets of Paris.

The Cresson government was thrown into disarray. Some ministers openly criticized Interior Minister Philippe Marchand for sending in the Mobile Guard. Then, in the pay negotiations for the public services, Public Service Minister Jean-Pierre Soisson conceded pay raises of 6.5 percent, making it necessary to rework the austerity budget for 1992 promoted by Finance Minister Pierre Beregovoy until the previous day.

The government’s fear was that any major strike could ignite a confrontation with the working class. After 10 years of attacks on jobs and working conditions, the right-wing social democratic regime was painfully aware that its props, the Stalinists of the French Communist Party and the trade union bureaucracies, would be hard-pressed to hold such a movement back, as their support in the working class had been largely eroded.

The pay concessions were rushed through in advance of the one-day general strike that took place on October 24. Public transport in the Paris area was the most affected by the strike, as 50 to 75 percent of the workforce walked out. However, the collapse of support for the trade union bureaucrats was shown in the small size of the demonstrations that accompanied the strike. 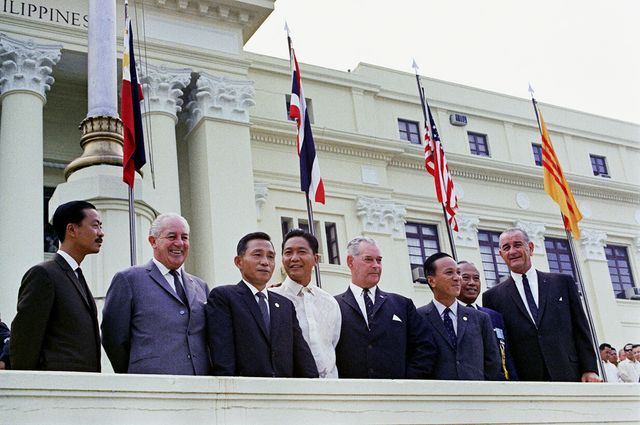 Manila Conference heads of state. Johnson is on far right

On October 24, 1966, talks opened in Manila between the United States, the puppet regime in Saigon and the five other countries participating in the imperialist intervention in Vietnam. It followed the conclusion of a tour by President Johnson of the major capitals in Southeast Asia.

Those sending contingents to give a “multinational” fig leaf to the US war of aggression were Australia, New Zealand, the Philippines and South Korea. Thailand was also represented, having opened its borders to serve as a base for US air raids.

The conference was designed as a publicity device by Johnson, who feared electoral setbacks for the Democratic Party in the upcoming November congressional elections. Philippine dictator Ferdinand Marcos, whose regime had won the favor of US imperialism by sending a token force of 2,000 engineers to aid the war effort, served as the host. General William C. Westmoreland gave a military briefing and claimed new successes for US imperialist forces, while Johnson encouraged speculation that the National Liberation Front was considering entering into peace negotiations.

Johnson’s attempt to portray the war in Vietnam as an international crusade enjoying broad support throughout the world was shattered even before the conference opened, as his motorcade came under violent attack by anti-war protesters in Sydney. Police fought pitched battles with demonstrators who attempted to block the US president’s limousine. The limousine carrying Australian Prime Minister Harold Holt also came under attack. Meanwhile, Marcos caused embarrassment for the Johnson administration on the eve of the conference by proposing a temporary halt to the bombing of North Vietnam.

The meeting concluded with a six-point peace proposal stating that the US and its allies would withdraw from South Vietnam only after six months had passed from the time when “the other side withdraws its forces to the North, ceases infiltration, and the level of violence thus subsides.” The demand was based on the false claim, asserted by Washington to the end, that the National Liberation Front guerillas had no genuine popular basis of support in the South, and that what was in fact a revolution was supposedly “communist aggression.”

North Vietnam in fact could not “withdraw” such fighters even if it wanted to. North Vietnamese President Pham Van Dong rejected the proposal, promising it would “fight until final victory against the US imperialists.”

75 years ago: US miners fight for union shop

On October 25, 1941 the United Mine Workers resumed its strike to obtain a union shop agreement for 53,000 US coal miners who worked in “captive mines,” after Roosevelt’s National Defense Mediation Board dragged out negotiations and attempted to impose binding arbitration.

The captive mines were directly owned by seven of the biggest steel makers—US Steel, Weirton, Bethlehem, Republic, Wheeling, Crucible, and Youngstown. They produced 70 percent of American steel output and 80 percent of the steel for war production.

The rest of the 400,000 members of the UMW had already won the union shop. The steel barons, Congress and the Roosevelt administration feared that the winning of a union shop in the captive mines would inspire the steelworkers to launch their own struggle against the open shop, threatening US imperialism’s preparations to enter World War II.

Roosevelt issued three orders demanding the miners return to work, all of which were ignored. He then gave the green light to Congress for open-shop and no-strike legislation. The stooges of big business in Congress issued vehement denunciations of the miners and UMW President John L. Lewis. “Let me finish up this Neutrality Bill before I take care of the fourth member of the Axis,” said Texas Democratic senator Tom Connally.

The AFL and CIO bureaucrats, who supported Roosevelt, did not dare speak openly against the UMW. But the Stalinists of the Communist Party publicly lined up with Roosevelt, insisting that “Labor has a responsibility, for its own protection and that of the nation, summarily to reject the policy of John L. Lewis.”

On October 30, Lewis ended the strike and submitted to another arbitration panel that stalled for one month before ruling against the miners. Ultimately, the “captive” miners went on strike again, supported by sympathy strikes of tens of thousands of other UMW miners, before the steelmakers and government gave in. 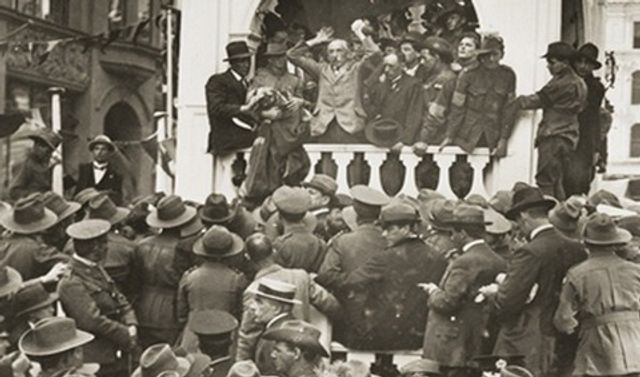 On October 28, 1916, Australia held its first, non-binding plebiscite under the Military Service Referendum Act 1916, on the question of the government’s power to conscript citizens to fight in the war overseas. Labor Prime Minister Billy Hughes called the vote as part of a broader campaign to suppress anti-war sentiment, and promote an atmosphere of militarist nationalism.

Two years after the outbreak of World War I, mounting hostility to the war was leading to a sharp fall in the number of military volunteers. Reports of massive casualties in the Battle of the Somme, which claimed an estimated 28,000 Australians, strengthened anti-war sentiment.

The plebiscite heightened class tensions and spurred the growth of anti-conscription organizations. In the run-up to the referendum, anti-conscription rallies attracted tens of thousands of people across the country. One in August at Sydney’s Domain attracted over 100,000 people, about one-sixth of the city’s population.

Many of the smaller rallies and meetings throughout Australia were routinely broken up by pro-war groups. Anti-conscription material was confiscated by the censor. E.E. Judd, a treasurer of the Anti-Conscription League, when forcibly removed from the platform at one demonstration, called out to the crowd, “This will give you an idea of what you can expect under the dominance of a military caste.”

Hughes’ campaign underscored the pro-war, militarist character of the Labor Party, which had been formed on the nationalist program of “White Australia.” Hughes was expelled from several workers’ organizations and senior members of the Labor government resigned. Just two months after the plebiscite the Labor Party split, with Hughes leaving and forming the National Labor party. In October, he denounced anti-conscriptionists as “…every enemy of Britain open and secret in our midst. They include the violent, and the lawless, the criminals who would wreck society and ruin prosperity. Will you dishonour Australia by joining their company?”

On polling day, the results revealed a sharp polarization. Although voting was not compulsory, 82.75 percent of those eligible to vote cast ballots. The complete returns showed the vote for conscription to be 1,087,557 while that against was 1,160,033, a margin of only 72,746 votes.