On Monday, video game performers, actors and voiceover artists went on strike protesting against a dozen entertainment giants which refuse to satisfy modest demands advanced by the Screen Actors Guild‐American Federation of Television and Radio Artists (SAG-AFTRA). Picketing took place at Electronic Arts, Inc., one of these companies.

The main grievances involve: secondary compensation in the form of residuals, safety protection for strenuous sessions and perilous stunts, and transparency of information with regard to roles offered. Despite the modest character of these demands, which in film and TV are typically the norm, the corporations have met them with a great degree of intransigence. 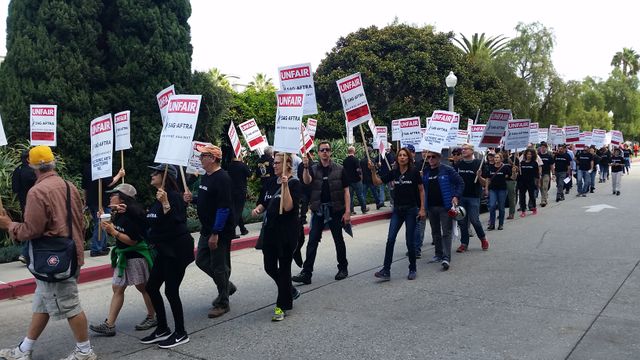 The strike was quite limited in scope: on the one hand, Electronic Arts, Inc. curtailed picketing to an area tucked away from city traffic to make sure the action would receive the least visibility and exposure. On the other hand, the union agreed in advance to such a location and restrictions, as it had no intention of expanding the strike to other sections of the working class.

Despite these restrictive conditions, actors and performers demanded that their grievances be addressed and spoke, at times in militant terms, to the World Socialist Web Site against the corporations, raising a number of critical political issues which went well beyond the immediate struggle at hand. Their voices echo a development in the consciousness of workers across the globe: deeply affected by the crisis of capitalism, they are pushed into the political arena with the resurgence of the class struggle and are seeking historical clarification and political leadership. 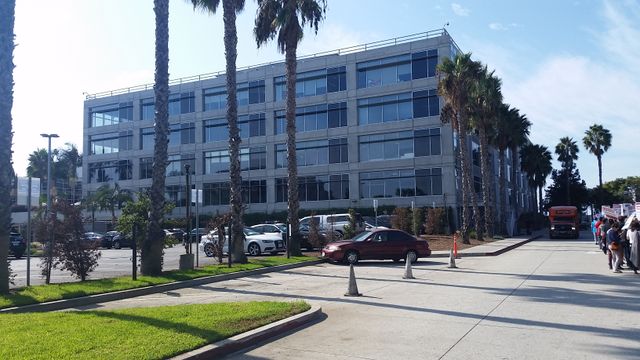 Mark, a film and TV actor, raised a number of political and historical issues: “In the 1930s there was a powerful labor movement. We have seen decades of serious, hard, expensive work that corporations have paid for to neuter the labor movement. Union membership is practically in single digits. In terms of a broad strategy of the working class, this strike doesn’t represent such a thing. It’s one of many spontaneous struggles. But the action, as small as it may be now, is all part of a much larger struggle.”

He pointed out: “We have a ‘left’ that’s in complete disarray, very weak. In the 60s and 70s huge efforts were made to reorganize a vital left after the US Communist Party had essentially become a left wing of the Democrats. We have a huge task ahead of us to rebuild forces. We keep getting ripped off [by corporations] and we’re going to have to organize at much higher levels.” 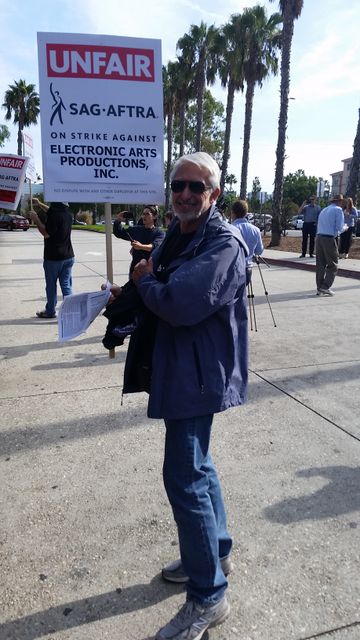 Mark also spoke about the resurgence of socialist sentiments among workers and youth. “Thank God! Socialism has lately achieved a small amount of currency, small in the sense of the understanding of what it really represents. But I’m very encouraged there’s something stirring. That’s where we have to go. It’s a daunting struggle that of course won’t come out of the Democratic Party.”

Colleen, a voiceover artist, complained that after almost two years of negotiations the companies “refuse to even entertain anything we’re asking for.” She added: “My biggest concern is vocal stress. I do a lot of young boy characters and video games require heightened energy performances. I’ve woken up many times without a voice after a 7-hour session the day before. The same concern applies to MoCap [motion capture] stunts using heavy machinery: there must be a way to ensure safety of these performances.”

She was not sure why it took 20 years for SAG-AFTRA to renegotiate an obsolete contract: “Perhaps they didn’t realize the scope. They’re always behind when technology starts coming. Back then there weren’t as many voice actors. Today, dialog and storytelling is much more part of the video game experience, almost like watching a film and being part of it.” 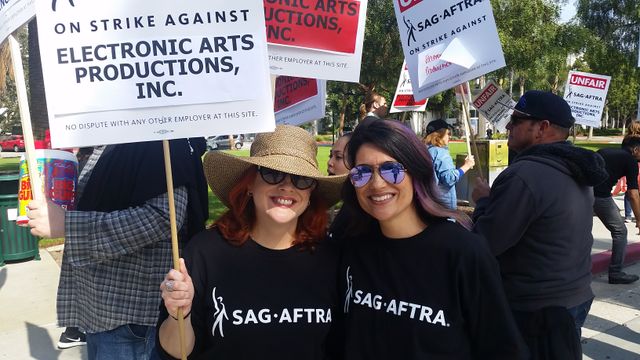 The discussion turned to the November elections and Colleen gave expression to a growing sentiment of rejection against the whole establishment: “I’m so depressed about the state of affairs. I can’t believe these [Trump and Clinton] are our two choices. I feel like they were foisted on us and we’re forced to choose between them. Is this the best we can do? I feel like if I choose either side I’m throwing my vote away. I’m not a political person, but this thing has been so crazy. I’ve got two kids; no one is talking about education. No, I’m so tired of the hypocrisy, lying and cheating; I say no to both!”

Christina stepped in when this reporter brought up the proposed AT&T acquisition of Time Warner: “What happened to the monopoly laws? They’re huge mega mergers and nobody is going to compete with them; they can set the prices and we have to pay. Corporations have become far too large.” She agreed that large companies control the media, information, communications, entertainment, art and, as she added, “our food, our pharmaceuticals, our money.” 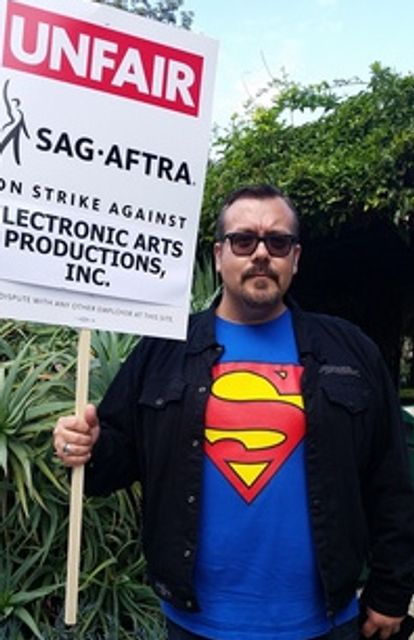 Brian, a voiceover actor, commented: “Sometimes we’re asked to put forth a lot of stress on our vocal cords and some people have been injured to the point where they’re no longer employable. It’s not just about compensation, but also transparency and working conditions.”

He explained: “You may be working on a game for a year or two. If you’re the lead, two or three times a week. If you’re the rank-and-file, the ‘side quest’ or ‘mini game’ guy, as they call it, you may work as a day player. A game has room for half a dozen leads; the rest is the ‘atmosphere’ of the game. A lot of us do that. We’re asking for extra-compensation in case the game is successful.”

Brian noted the need to expand the struggle: “We’re hoping this is not just about us. It’s the entire sector: I know video game artists, developers, play testers who are worse off than we are. Many of them are afraid that if they step forward and speak out they’ll lose their jobs.” 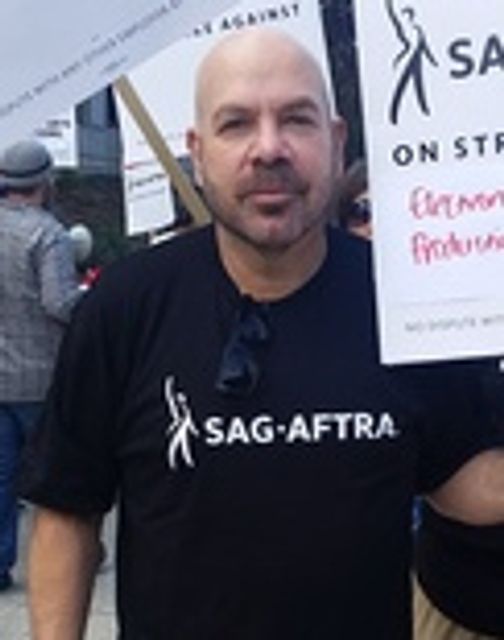 Jason, an actor picketing in support of fellow performers, explained the importance of voiceover actors from a broader perspective: “Video games are being integrated into episodic television. In the next 10 years it won’t be just video games. This is much bigger than people are talking about.”

Commenting on the recent AT&T/Time Warner merger announcement, Jason bluntly said: “It scared the shit out of me. The bigger the monopolies become, the harder it is to support the art, entertain people and send a message. It is all about making money.” 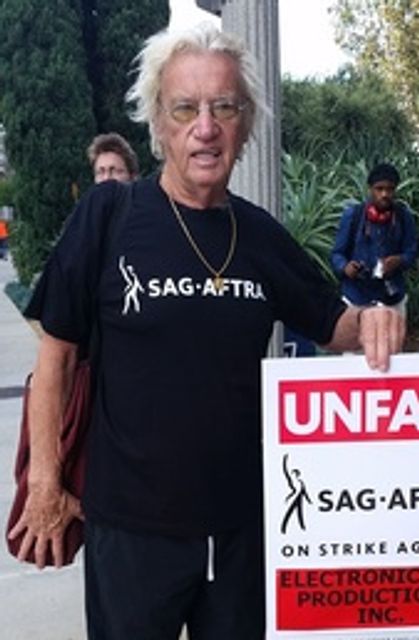 He further emphasized: “We’re one of the most successful countries in the world, and people at the top don’t want to share with everybody else. The whole idea of this country is to come here to have a better life. My father is Polish, came here after the Holocaust. I understand the idea of coming to this country and getting a piece of the pie if you work hard. That no longer exists and that’s scary to someone like me, a middle aged guy trying to make a living working.”

John, an actor from New York, said: “we [actors] are becoming the bottom of the list. We seem to be losing everything. They’re taking away more and more. It’s all about profit, not about art or quality. It’s not about caring. It’s all about greed. We live in an ‘I’ society, not a ‘we’ society. When I grew up, we had neighborhoods, everybody looked after everybody.

“They’re making unions obsolete. We keep losing. I’m surprised we’re having a strike. Everybody should be on strike; although you have celebrities like Tom Hanks who produce non-union films and forget where they came from.”