“They are picking on the most vulnerable sections of society”

BCBSM informed thousands of nonunion retirees in June that the company would be changing over from group to individual coverage as of January 2017. It wasn’t until October that management gave retirees information on the price of the alternative health plans they would be offered. Retirees were then shocked to learn of the enormous costs being shifted to their shoulders by BCBSM.

Some 3,200 nonunion employees are affected by the change this year, and thousands more unionized retirees face losing group coverage at the end of 2017. BCBSM retirees are being shifted onto a private exchange administered by Towers Watson, a business consulting firm. 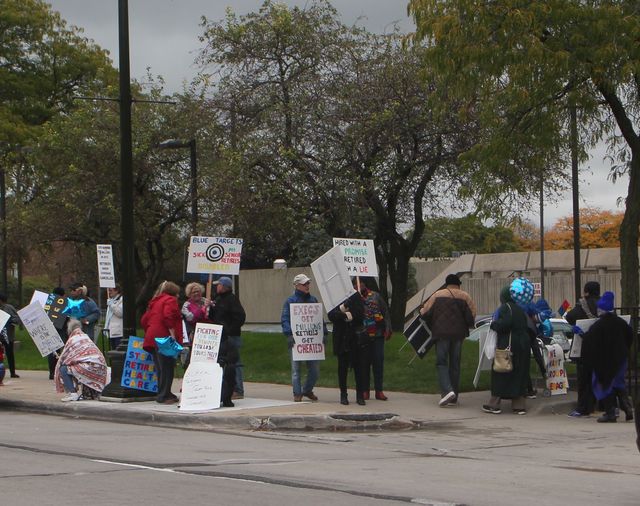 According to rally organizers, the event drew up to 100 participants, and in response management placed active employees on lockdown so they could not leave the building to join the protest. Organizers also said the company moved its board of directors meeting in response to the picket.

More and larger protests are being planned.

Betty Kimbel, a spokesman for retirees opposing the changes, talked to the World Socialist Web Site about the cuts. Kimbel retired after 33 years with BCBSM.

“Blue Cross Blue Shield made us promises, they should keep those promises,” said Kimbel. “This is part of a trend, affecting not only retirees but also those on long term disability.

“Our CEO, Dan Loepp, made in excess of $9 million in 2015 and is throwing us to the curb. Other executives received six and seven figure bonuses. It is the greed for the almighty dollar. The shame of it is that BCBSM is giving Medicare-eligible retirees over the age of 65 money to buy qualifying health plans, but we have to buy BCBSM products. So the money is going right back into their pockets.” 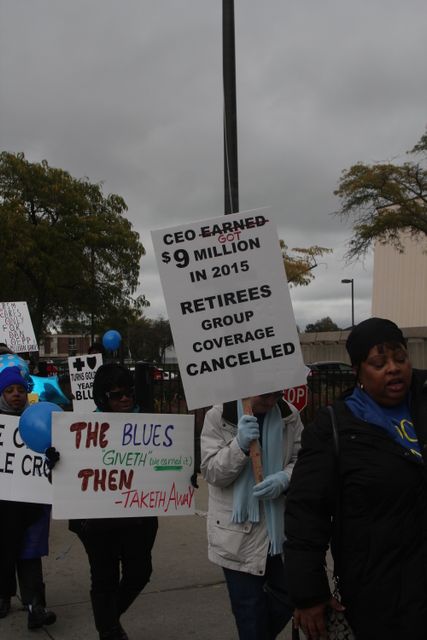 “They are picking on the most vulnerable sections of society, people who are on dialysis and under treatment long-term for cancer.”

The changeover from group to individual coverage means that retirees must now buy the insurance, paying the premium and footing out-of-pocket costs as well. The company will now pay an inadequate subsidy toward these costs, with retirees responsible for the balance. As the cost of healthcare continues to rise, retirees will be saddled with paying the increases.

Organizers of the protest informed all the major news outlets in Detroit, but none bothered to cover the event. That included the city’s two major newspapers the Detroit News and Detroit Free Press. The blackout of the protest by the corporate media suggests extreme sensitivity to the interests of BCBSM, a major employer in the city. Indeed, BCBSM CEO Loepp was named one of its Michiganians of the year in 2013 by the Detroit News .

For its part, the United Auto Workers, the bargaining agent for unionized BCBSM workers, has not organized any opposition to the cuts, despite the fact that its members are also under attack. After issuing a brief statement in June at the time of the announcement of the changeover, the UAW has remained silent on the attack being carried out against retirees.

Gwen Smith, a retiree who had 41 years with BCBSM, said, “How can you do this to us after we worked all those years when you told us we wouldn’t have to pay for insurance when we retired? I always felt secure in the fact that our insurance would be free. I could have gone to work instead for another company. 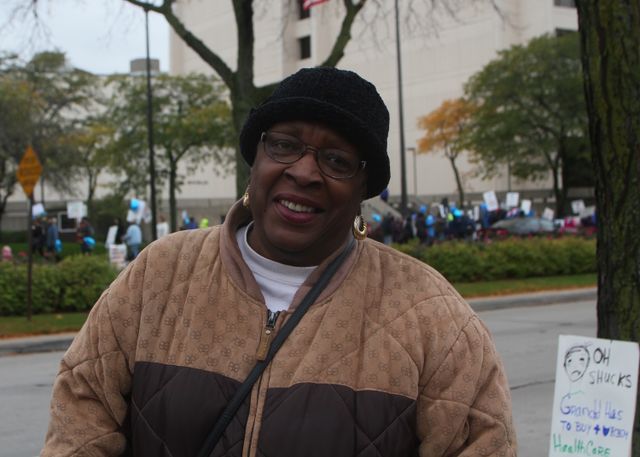 “They obviously had this planned for a long time. It is devastating how they used us.

“I always had pride in working for Blue Cross. They taught us to care about our clients and to provide good customer service. All of that is gone. This is what Dan Loepp thinks of us.

“I feel especially sorry for the kids coming out of college and looking for a job. If BCBSM can do retirees like this, what will happen to them? It is a case of the man on top getting all the money.”

Jan, a retiree with 45 years at BCBSM, said, “There are people who are really sick. All of a sudden you get a letter saying you are no longer covered.

“The rates have really skyrocketed. After 45 years of dedicated service, then this happens to us. I don’t know what my situation is going to be in one year.”

“For them to be an insurance company, and then take away our insurance after we worked all those years is hurtful to us, especially when we supported BCBSM insurance.”

She said that active employees were being impacted by the changes as well. “They just increased employee contributions as well. The amount I was given was $110 per pay period.”

Shirley, who had 35 years with BCBSM, said, “It is devastating. You cannot replace the coverage you have. Before I didn’t have to contribute to premiums. Now I have to pay.”

She said that employees had made certain sacrifices working for a nonprofit company. “There was a lot of give and take. You didn’t receive annual pay increases like a for-profit company.”

The Obama administration’s Affordable Care Act is giving incentives to health care sponsors to attack affordable retiree health care. These changes will inevitably be extended to active employee coverage as well. The cuts at BCBSM are part of a broader trend in which employers are dumping their retiree group coverage and forcing retirees to buy private insurance.