American independent filmmaker Kelly Reichardt’s Certain Women consists of three vignettes set in and around the rural southwestern Montana town of Livingston (population 7,000). Adapted from short stories by Maile Meloy, Reichardt’s latest film, like her moving 2008 movie Wendy and Lucy, deals with the emotional malnourishment and disaffection that afflicts a large swath of the US population. 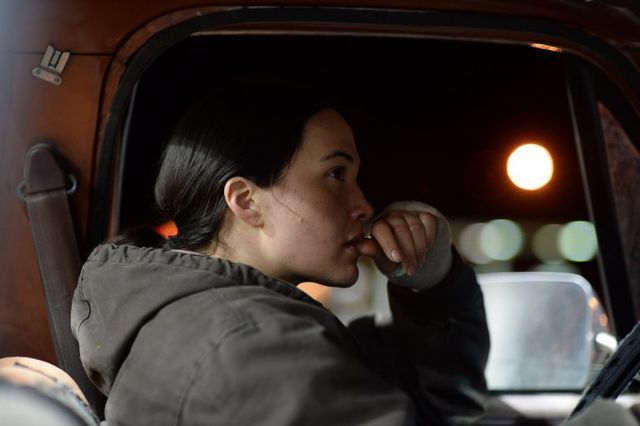 Reichardt is a talented filmmaker, and though her works after Wendy and Lucy—Meek’s Cutoff and Night Moves—were largely off the mark, her latest film is for the most part clear-eyed and sensitive.

In Certain Women’s first segment, Laura Wells (Laura Dern), a well-meaning attorney, practices law in the small dilapidated town. On the cusp of winter, everything seems chilled, desolate and gray. A train and its whistle are virtually the only indications that the location is joined to a larger world.

Laura is in the aftermath of a tryst with a non-committal lover when the movie opens. The scene is elegantly done, with a mirror and door frames accentuating the distance between the lovers.

She is greeted at her office by an irascible client, Fuller (Jared Harris), disabled due to an injury incurred on his job. For months, Fuller has been showing up at her office and for months Laura has been trying to convince him that unfortunately he is not entitled to compensation because he accepted an initial, minuscule settlement. After her encounter with Fuller, Laura rolls lint off her shabby clothes, perhaps trying to brush off her malaise. 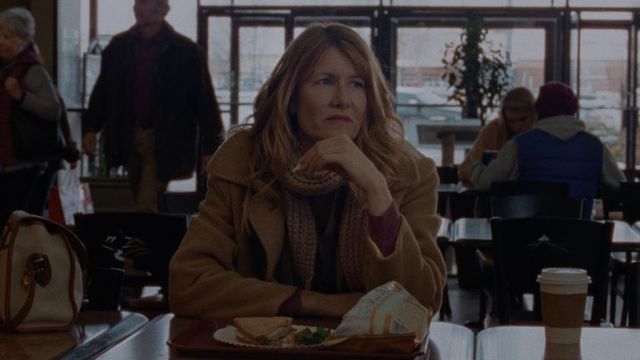 We see her at the dispiriting local mall. Box stores and their fluorescent lighting form a soulless background, rendered even more painful by the presence of a group of Native Americans performing traditional dances for a handful of shoppers.

Fuller is pushed into taking desperate measures. At the offending company, he takes the night watchman hostage. When Laura arrives he has her read his file, which describes how he was cheated out of his settlement. A happy ending is not likely …

The second section, not as intriguing as the other two, features Michelle Williams as Gina Lewis, a middle class woman, who with her husband (James Le Gros) is building a week-end home in the woods at the foot of the mountains. Frustrated, she jogs, smokes, then deals with her laid-back mate (who has recently ended an affair with Laura) and her irksome teenage daughter. 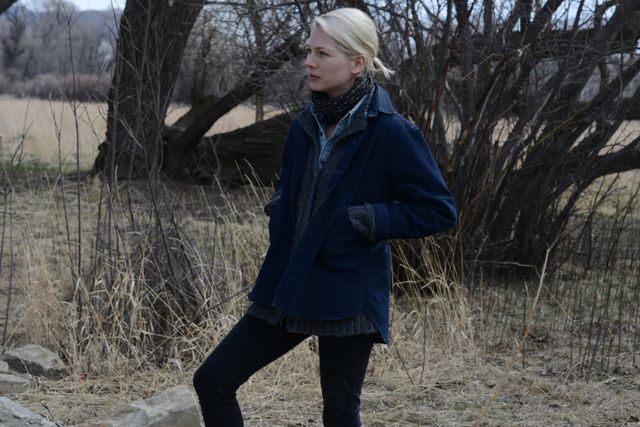 To incorporate local materials into the house’s construction, Gina cajoles an elderly man (Rene Auberjonois) into relinquishing the sandstone on his property. He is not pleased about the transaction. The small victory may temporarily boost Gina’s ego, but it will not be as easy to mend the frayed connection with her family. Although her husband and daughter are less uptight and aggressive than she, their distress and boredom are no less real than hers.

The last section of the triptych is animated by the systemic isolation and fragility of its characters. Jamie (Lily Gladstone), a young Native American woman (in the Meloy story, “Travis, B.,” the character is male), tends a ranch and its horses in their owners’ absence. One evening when she’s driving past the local school, she notices people entering the building. Desperate for any type of human contact, Jamie follows them in. She finds herself in a classroom where a handful of teachers are taking a course on school law taught by a recent law school graduate Beth (Kristen Stewart). Jamie has no interest in the class, but she feels an attraction to its teacher.

Guiding the teacher to a diner after class, Jamie finds out that Beth’s night job—through a misunderstanding—is many hours away from her home and day job. In the course of a few classes and meals, Jamie hungrily soaks up any attention Beth can spare her. When Beth is replaced as the class’s instructor, Jamie tracks down the surprised woman. Jamie explains, without a trace of self-pity: “I just knew that if I didn’t start driving, I wasn’t going to see you again, and I didn’t want that. That’s all.” Jamie’s young face registers a difficult history—and not just her own personal history. Gladstone gives a delicate and complex performance.

In Certain Women, the rugged imagery and tense relationships combine to create a sense of hardship, in this case more directly psychic than economic. The film depicts a society that leaves its victims begging for a respite from their aloneness.

Reichardt told an interviewer that she likes to ask students at Bard College, where she teaches: “Where’s the anger in your movies? Draw from your anger. And they go, ‘What anger? What are you mad about?’ ‘You should be angry.’” Certain Women is Reichardt’s partial answer to her own question.

Netflix’s Mascots, the latest “mockumentary” from actor-filmmaker Christopher Guest, is a fairly inconsequential and not terribly funny movie. Guest has a well-deserved reputation for comedy, having co-written (and acted in) This is Spinal Tap and directed (and co-written and acted in) Waiting for Guffman, Best in Show, A Mighty Wind and For Your Consideration. 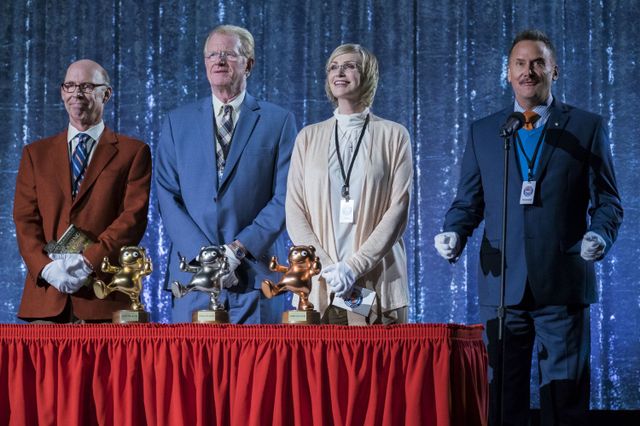 Competitions of one sort or another are often the satirical focus of Guest’s films. True to form, Mascots revolves around the World Mascot Championships in Anaheim, California—which hardly makes any sense because the subculture of “mascotry” is by and large a type of foolishness peculiar to American professional and college sports. (Why are the British, Israelis and Indians competing?)

In general, despite the entertaining presence of Chris O’Dowd, Parker Posey, Jane Lynch and Fred Willard (as a terminally inappropriate commentator), the movie’s humor and format are not strong enough to sustain interest. Interspersed with a few decent jokes is a lot of sluggish material, featuring lines like “My wife and I are doing this never-go-to-bed angry thing, so I’m exhausted.” More watchable are the performances of the mascots themselves, but even those have extremely limited value (A big-headed rabbi dances with a worm, a huge fist symbolizes the violence of professional hockey, a plumber unpleasantly unclogs a toilet, and so forth.).

Dispensing with any reference to the world outside its immediate sphere of attention, even the wider world of sports, Mascots tends to dissipate in thin air even as one watches it.