Nearly 100 students attended a meeting held Wednesday by the International Youth and Students for Social Equality at Humboldt University in Berlin. The title of the meeting was “The election of Trump: Political causes and lessons.” The IYSSE organised the meeting on short notice and advertised it over just three days with flyers and posters on the campus. Nevertheless, every chair in the meeting room was filled and additional chairs had to be brought.

The large turnout and intense discussion at the meeting, which we will summarize in a subsequent article, indicate an important political change. A new generation of young workers and students is becoming politicized and commencing a serious discussion on a revolutionary perspective to fight social reaction and war. 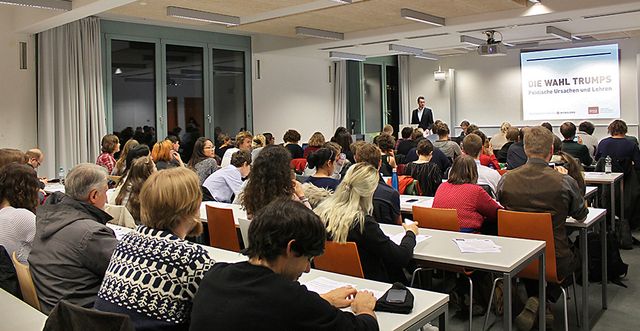 The meeting at Humboldt University

The meeting was chaired by Sven Wurm, spokesman for the IYSSE university chapter and a representative in the student parliament at Humboldt. To address the meeting, the IYSSE invited Johannes Stern, also a member of the IYSSE and an editorial board member of the World Socialist Web Site.

Stern began his contribution by stating that the election of Trump represented a historic turning point. With his election, an extreme right-wing representative of the American ruling class had moved into the White House—someone who would escalate US military violence abroad and attack social and democratic rights at home.

“Above all in Germany, nobody should underestimate what it means when a semi-fascist commands the world’s strongest military power with the largest nuclear arsenal,” Stern said.

A glimpse at Trump’s staff leaves no doubt about the nature of his administration, Stern continued. With Steve Bannon, the former head of the far-right, anti-Semitic Internet platform Breitbart News, Trump has appointed a fascist to be his chief adviser in the White House. Under consideration as possible ministers are, among others, Rudolph Giuliani, the former “law-and-order” mayor of New York, and John Bolton, one of the architects of the illegal attack on Iraq during the term of George W. Bush.

On the basis of statistics, Stern rebuffed the notion spread by liberals and the pseudo-left to the effect that the “white working class” was responsible for Trump’s victory. In fact, Trump received fewer votes than his Democratic rival Hillary Clinton and fewer votes than the losing Republican candidates John McCain and Mitt Romney in the 2008 and 2012 elections.

Over the past eight years, however, support for the Democrats had collapsed due the party’s anti-social and militarist policies. This slump in support included millions of women, youth and minorities. The largest group in the election, around 100 million, were non-voters and supporters of third parties.

Stern identified those principally responsible for Trump’s election victory: Hillary Clinton, representing Wall Street, the military and identity politics, who attacked Trump essentially from the right, accusing him of being “an agent of Putin.” Secondly, Barack Obama, who had been elected by many workers eight years ago as the candidate of “hope” and “change,” but then continued the hated war policy of the Bush administration and passed the entire burden of the international financial crisis onto the population.

“And then there are Bernie Sanders and the pseudo-left organizations who supported him,” Stern said. “Sanders won support in the primaries because he called himself a socialist and called for a political revolution against the billionaire class. But then he cowardly called for a vote for Clinton and thus enabled Trump to channel all opposition to the established parties.”

Under conditions of growing class tensions, the ruling elite was now closing ranks. “Within a few hours of the election, they all lined up behind Trump, from Obama to Sanders and the unions, declaring their readiness to work with him.”

In order to understand the deeper causes of Trump’s ascendency and the turn to the right by the entire ruling establishment in the US, Stern continued, one had to examine major political and historical developments. He referred in detail to US war policy, the decline of American democracy, and the deep social divisions that have developed over the 25 years since the dissolution of the Soviet Union. Amongst other issues, he addressed the stolen election of 2000, Abu Ghraib, Guantanamo, extralegal killings and the massive build-up of the police in the US.

In summing up, Stern quoted from a Perspective commentary published by the World Socialist Web Site titled “Mass student protests against Trump election: The way forward”:

“Decades of war, austerity and social reaction have fatally undermined democratic processes and produced a society dominated by financial parasitism and political corruption. These are the conditions that have vomited up Donald Trump, the fascistic personification of the collapse of American democracy.”

The Perspective went on to state that “The fight against Trump must therefore be based on the fight against capitalism.” It required uniting the working population and youth across all racial, ethnic and gender divisions in the United States and internationally on the basis of a socialist program.

“It is not a question of opposing one individual,” the statement continued, “but an entire social and economic system that is based on private ownership of the levers of production and the ever-greater accumulation of wealth by the corporate and financial aristocracy.”

Stern stressed that it was precisely in Europe and Germany that the construction of a revolutionary socialist movement assumed great urgency. “The elites here are also reacting to the break-up of the post-war order and growing transatlantic tensions with a return to militarism and nationalism,” he said. “In Germany, a doubling of the military budget is already being demanded and the need for German nuclear weapons is being discussed.”

Stern ended his lecture with a quotation from David North’s lecture “Philosophy and Politics in an Age of War and Revolution,” delivered to some 250 students at Goethe University in Frankfurt:

“We are living in revolutionary times. The contradictions that give rise to war also prepare the ground for social revolution. Contradicting the claims of the subjectivists and irrationalists, who proclaim the disappearance of the subjective agency of socialist revolution as conceived by Marx, the global development of capitalism during the past half-century has vastly expanded the ranks of the working class. This is the basic force to which Marxists turn. The great challenge that confronts Marxists is the political preparation of a vanguard of advanced workers that can direct the coming mass movement of the working class toward the conquest of political power.”