American artist Kerry James Marshall’s paintings of barbershops and beauty parlors, public housing projects and middle-class suburbia are vibrant renderings of quotidian twentieth century African-American life that are distinctly modern while embracing the canon of Western European art. This retrospective of 35 years of Marshall’s work, jointly organized by the Museum of Contemporary Art Chicago; the Metropolitan Museum of Art, New York; and the Museum of Contemporary Art, Los Angeles, is welcome and somewhat overdue.

In De Style (1993), two urbane young men are getting their “dos” done while others hang out in the seats along the wall. The young men’s deadpan gazes assert their self-confidence within the social hierarchy of an African-American barbershop. The painting explicitly references a sixteenth century Hans Holbein portrait, Two Ambassadors, of similarly confident and worldly young noblemen. At the same time, it alludes by its title and color scheme to the Dutch De Stijl movement (1922-1932), a form of pure abstraction that distilled the visual world into grids of black, white, yellow, red and blue. 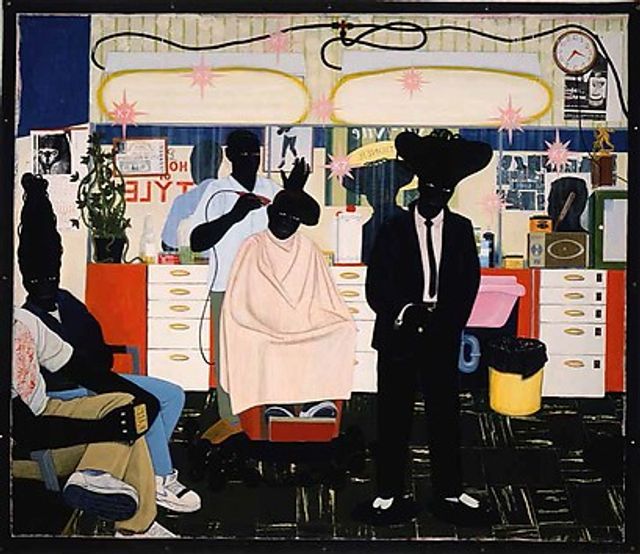 Such a mash-up between historical contexts and artistic styles is characteristic of postmodernism in its heyday in the early 1990s, a zeitgeist that influenced Marshall. Set apart from his contemporaries to some extent, however, by his attention to scenes of working class life and his continuation of a tradition of representational figurative painting, his work has perhaps received less attention than its due over the past 30 years.

Amid the present ramping up of identity politics, however, the fact that all of Marshall’s figures are exclusively and uniformly painted the darkest hue of black has won him attention. The work has considerable merit, though its weaknesses are in the present context being taken as its strengths.

His most significant body of work is the Garden Project, a series of five large-scale paintings on canvas tarps affixed directly to the wall with grommets that takes its name from public housing projects in Chicago and Los Angeles. Built in connection with the Great Society programs in the 1960s in the US, these densely clustered high-rise complexes, often named “Gardens,” were attempts to alleviate the explosive social tensions building up in urban areas across the country.

Marshall himself lived in one such housing project when his family moved from Birmingham, Alabama, to Watts in 1963. Two years later, police brutality provoked a five-day uprising in the Los Angeles neighborhood that resulted in 34 deaths, thousands of arrests and $40 million in property damage, and necessitated the calling out of 4,000 National Guard to suppress it.

The pall of such events, though not referred to explicitly, hangs over Marshall’s Garden Series despite their sunny blue skies. The painting Many Mansions (1994) shows three men tending flowerbeds, identically dressed in white shirts and black pants. The towers of Chicago’s Stateway Gardens form an imprisoning wall behind them. From their steely expressions and the cellophane-wrapped gift baskets of stuffed animals at their feet, they would seem to be digging graves, rather than gardening. 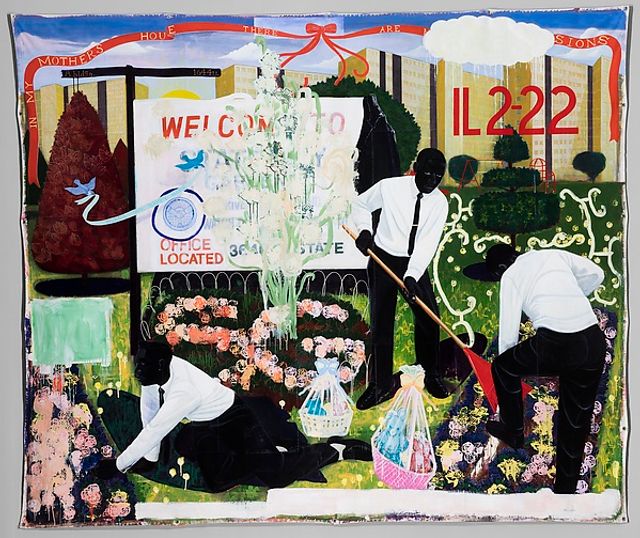 Many Mansions, 1994. Acrylic on paper mounted on canvas

Marshall has said he wanted to show life in these projects as something more than concentrated poverty ridden with drugs and crime. He focuses our attention on the figures, many of them children, who inhabit this world, stoically playing, running, camping out in these concrete-bound landscapes. Recurrent themes are the aspiration to a middle class life, the desire for leisure and romance, and the promise of equality often frustrated and betrayed. Other noteworthy paintings are Souvenir 1 (1997), of a golden-winged woman carefully tending to the memories of fallen civil rights and Black Panther leaders in her shrine-like living room, and The Lost Boys (1993), in memoriam to two young men who met an early death.

That being said, Marshall’s postmodernist-influenced outlook, particularly its rejection of history as a law-governed process in favor of historical pastiche and its promotion of identity politics, has severely limited his ability to place these experiences in the broader context of political developments in the US over the course of the 1980s and 1990s. Likewise, his treatment of black working class life as a social universe entirely unto itself contributes to this disconnect and makes this life seem fixed in amber. These limitations only become more pronounced in the more recent work, much of which is very weak.

Marshall’s difficulties are hardly his alone, but are shared by many of his generation, particularly those of the so-called “Pictures Generation,” a diverse group including John Baldessari, David Salle, Cindy Sherman, Richard Prince, Robert Longo, and Mark Tandy. United by their skepticism toward the authenticity of the image per se, these artists did not create but rather “appropriated” images, whether from advertising or Old Masters paintings, in order to comment upon their artificiality, their supposed lack of meaning. Marshall may have maintained his belief that visual art could still communicate something original about the objective world, but he shares other aspects of this postmodern outlook. 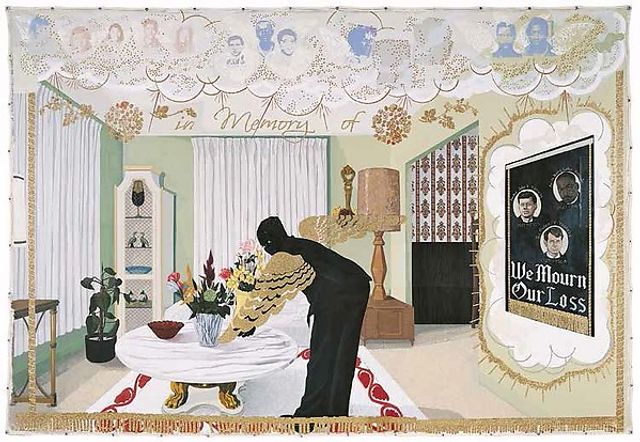 He came of age with the burgeoning of the California art scene in the1960s-early 1970s. As part of Los Angeles’s efforts to establish its credentials as “America’s Second Art City,” the Pasadena Art Museum mounted an influential retrospective of avant-garde artist Marcel Duchamp in 1963 and the Los Angeles County Museum of Art (LACMA) opened in 1965 with a focus on contemporary art. The early LA art scene embraced sleek European minimalism, the Pop Art of Andy Warhol, and the politically charged assemblage/installations of such artists as Edward and Nancy Kienholz.

As a high school senior, Marshall turned down a scholarship to the Chouinard Institute, where for decades many of Walt Disney’s illustrators honed their skills in technical drawing and animation. By the early 1970s, the newly founded California Institute of the Arts (CalArts) absorbed the Chouinard, replacing its traditional skills-based training, so essential for commercial work but considered “stifling” to visionary artists, in favor of more experimental conceptual work.

For Marshall, a working-class kid from Watts who wanted to paint like an Old Master, neither the Chouinard nor CalArts turned out to be the right place to study. After several years working and earning credits at Los Angeles City College, he enrolled in the BFA program at Otis, LA’s classical fine arts college. There he studied with his long-time mentor in figure drawing, the self-taught Charles White (1918-1979), an African-American artist best known for his WPA murals, as well as with artist Betye Saar, whose assemblages and collages incorporated ritual cosmologies from the Asian and African Diaspora.

Although Marshall chose the path of representational painting over the conceptual experimentation fostered at arts schools like CalArts, his work has been no less steeped in the politics of identity. Many of his early pictures, such as A Portrait of the Artist as a Shadow of His Former Self (1980), address issues of his “invisibility” as a black man. Playing on “blackface” stereotypes and referring to Ralph Ellison’s searing 1952 novel of racial violence of the same title, in Invisible Man (1986) the naked black figure is barely distinguishable against the black background except for the gleaming whites of his eyes and toothy grin. 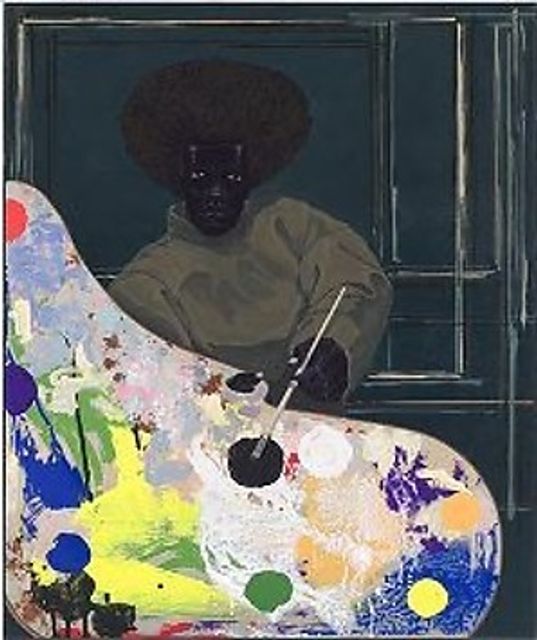 This mask-like uniformity of the faces in almost all of Marshall’s paintings highlights his shortcomings. Mindful perhaps of artist Jacob Lawrence (1917-2000), whose Migration Series paintings (1940-1941) chronicled the historical experience of African-Americans as they moved by the millions out of the South, Marshall similarly gives his faces the barest of detail.

But whereas Lawrence placed his blank-faced figures within a political and historical context to show them as representative of a movement not of individuals but of masses, in Marshall’s case such a broader, more developed consciousness is absent. Thus, the uniformity of the faces tends to blunt empathy, and undermine their “realism,” not just in a formal sense.

The relative strength of Marshall’s work remains its empathetic, concrete and imaginative depiction of working class life, which he attempts to situate artistically within the tradition of Western European figurative painting. For example, the Garden Series paintings allude, among other things, to the tradition of idyllic imagined landscapes in the manner of such painters as French Rococo muralist Jean-Antoine Watteau (1684-1721), in order to comment on the illusory nature of these urban “gardens.”

However, Marshall’s inability—for reasons which were not simply artistic—to situate these scenes politically and historically, to reflect in his images in a compelling way the stresses and shocks of the past period, and his preoccupation instead with “identity” treated in a relatively superficial, stereotyped manner, have stunted a potentially more interesting and significant body of work.