Tens of thousands demonstrated in London, and thousands more around the UK Saturday, to protest Donald Trump’s presidency and his travel ban on citizens from seven majority Muslim countries entering the United States.

The demonstration was organised by a number of organisations, including the Stop the War Coalition, People’s Assembly, Stand Up to Racism and the Muslim Council of Britain. 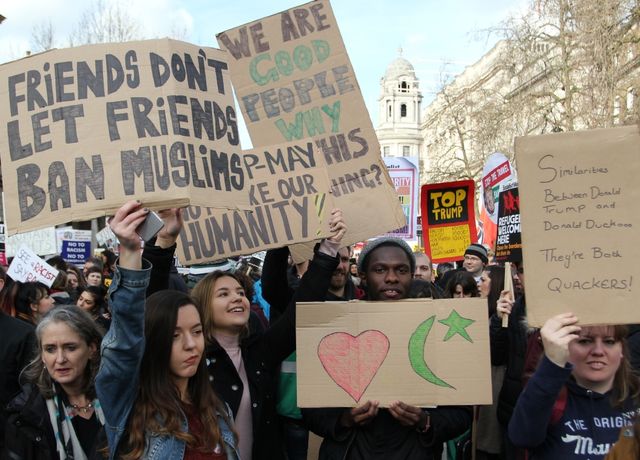 Protesters at the London demonstration

Protesters assembled at the US Embassy in the capital and marched a few miles to Downing Street—the residence of Prime Minister Theresa May—where a further rally was held.

The overwhelming majority attending were young people. Many carried homemade banners denouncing the ban and other policies being rolled out by the Trump administration.

While the vast majority of protesters attended on the basis of seeking to oppose Trump, the organisers sought to divert this opposition into the dead end of appeals to May on the basis that she end the “special relationship” between the US and Britain.

Speeches from the platform at the beginning and end of the rally were centred on appeals to May to “disinvite” Trump from attending an official state visit to the UK later in the year, when he is scheduled to meet the queen at Buckingham Palace. Andrew Murray, the chair of Stop the War and a supporter of the Stalinist Morning Star, went so far as to state, “I must admit I stand here as a republican, but my first thought when I heard that was ‘Donald Trump, keep your wandering hands off the Queen.’” 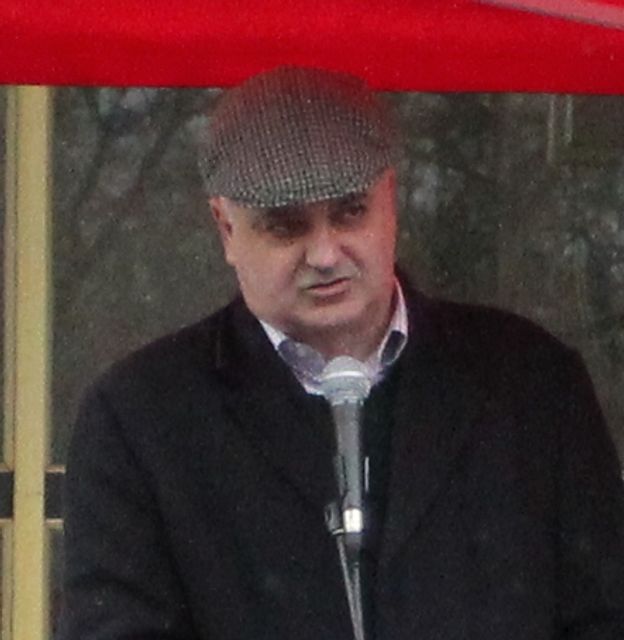 He called on May, “Let go of his [Trump’s] hand. It’s time, at last, to call time on the special relationship.”

Concealing the onslaught against democratic rights carried out by successive Labour and Tory governments, including the period that May recently spent as home secretary in the Cameron government, Murray concluded, “It’s time we had a British government” that will “stand up for the dignity of our democracy and the values that we believe in.”

None of this is aimed at mobilising the working class in Britain and the US against either Trump or May, but on appeals to sections of the ruling class and upper layers of the middle class to force May to recognise that such a close relationship with Trump would be detrimental to the interests of British imperialism.

In the lead up to the demonstration, Stop the War issued a petition calling for an end to the special relationship tied to opposing Trump’s proposed state visit.

A January 27 statement read, “Our government should not be seen to be endorsing the sorts of ideas and policies he [Trump] is putting forward.”

A January 23 article by leading STWC figure and member of the Counterfire splinter from the Socialist Workers Party, Chris Nineham, stated, “Any civilised or sensible government would be breaking links with him.”

He concluded, “We must demand now that our government breaks ties with the Trump regime and ends the special relationship. Only then can we begin to move away from war and towards a sane foreign policy” (emphasis added). 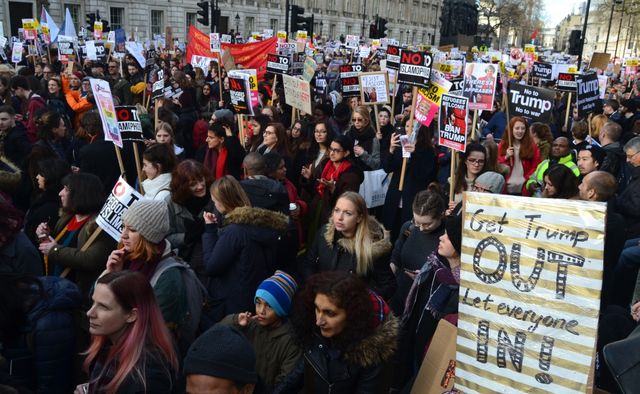 A section of the London demonstration

What unites all the organisers of the London protest is their resolute opposition to any independent movement of the working class against the ruling elite.

John Rees, another leader of Counterfire, spoke in the name of the People Assembly outside Downing Street. Rees claimed that the only way forward in the fight against Trump and May was by supporting and joining the trade unions. Trump, he said, was attacking the unions.

This completely misrepresents the relationship between Trump and the trade unions, which have reached out to the fascistic demagogue based on asserting a common platform of economic nationalism in defence of US capitalism.

Last December, the New York Times published an op-ed piece by Richard Trumka, the president of the American Federation of Labor and Congress of Industrial Organizations (AFL-CIO), arguing that Trump would be far more successful if he saw the unions as “partners” rather than antagonists. January saw the AFL-CIO urge Trump to honour his pledge to renegotiate the North American Free Trade Agreement, with Trumka pledging, “We are ready to fix it.”

In February, Trump held a White House lunch with corporate executives and officials from the United Steelworkers (USW) and the International Association of Machinists (IAM) from motorcycle manufacturer Harley-Davidson. Trump said of the unions, “You folks have been terrific to me.”

The head of the USW, Leo Gerard, has applauded Trump’s executive order pulling the US out of the Trans-Pacific Partnership (TPP) trade pact, pledging to work with Trump on the “promised, pro-worker, pro-income-growth agenda that prioritizes revitalizing manufacturing.” 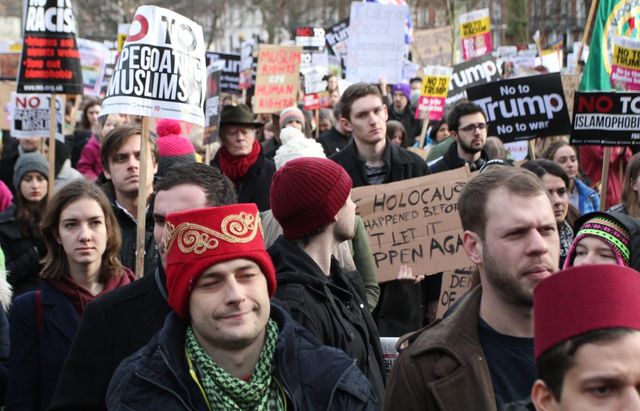 Protesters on the London demonstration

In the UK, the unions have an unbroken record of organising defeat after defeat for the last three decades. But this didn’t prevent Rees from declaring, “What we should chant today is union, union, union!”

The same pro-British capitalist message was repeated at protests all over the country. In Sheffield, for example, around 800 people rallied outside City Hall to be subjected to a platform dominated by the Labour Party, Green Party and pseudo-left groups including the SWP.

Former Greens leader Natalie Bennett condemned May’s support for Trump as being opposed to British national interests. “We are focusing on Trump,” said Bennett, “but we’re also focusing very much on Theresa May, walking hand-in-hand with Donald Trump, and I think she’s got a message from Britain that says, ‘that’s just not acceptable.’”

Sheffield Trade Union Council (TUC) Secretary Martin Mayer condemned May as a racist but was silent on the Labour Party’s anti-immigrant record, including its repeated calls—backed by the Trades Union Congress—for a “legitimate discussion” against the free movement of labour. Rally organisers presented speakers from a range of ethnic and community associations, including local Labour councillors Mohammed Maroof, and Abdul Khayum, whose political affiliations were deliberately concealed.

The SWP’s Maxine Bowler was introduced as a “leading trade union activist” and combined demagogic attacks on Trump (“You’re fired!”) with overt support for the imperialist powers in Europe and elsewhere. “Politicians around the world are having a go at Trump,” she declared. “We need to stop Theresa the appeaser.”

Prior to the London demonstration, an attempt was made to sabotage it by Guardian columnist Owen Jones and a number of his journalistic co-thinkers. Jones, a Labourite who, last year, played a pivotal role in the attempted coup against Labour leader Jeremy Corbyn, launched a slanderous witch-hunt against the SWP, claiming the group were behind one of the organisers of the event, Stand Up to Racism. He tweeted Friday, “I’m not taking part in tomorrow’s Trump demo because of the leading role of the SWP in it, a cult which covered up rape.”

The aim of the attack on the SWP, using its bureaucratic efforts to suppress accusations by two members against one of its leaders in 2013, is aimed at whipping up hysteria against all left-wing political thought and tendencies—asserting that the “Comrade Delta” affair is an indictment of Leninism, Trotskyism and proof that “gross abuses of power” are “inevitable on the far left.”

Jones’s aim is to stigmatise anyone who even remotely challenges his efforts to subordinate politics to the Labour Party—and above all the pro-capitalist, pro-European Union perspective of its Blairite wing that he regurgitates every week within the pages of the Guardian.

Jones is a leading figure in the Stop Trump Coalition, which is seeking to exploit mass hostility to the right-wing regime in the White House and to the Tories to argue that last June’s referendum decision to leave the EU must give way to a reorientation towards a new anti-US, pro-EU foreign policy.