DeVos plans to “rewrite the education playbook for America”

Half of Detroit’s public schools targeted for closure

As the US Senate prepares to vote on the nomination of right-wing billionaire Betsy DeVos for secretary of education, her war against public education is coming to fruition in Detroit, the poorest big city in America.

Michigan’s State Reform Office (SRO) has released a list of 38 schools slated to be closed as early as June 30 for “non-performance.” It is the first use of a 2009 state law, heavily promoted by DeVos and her pro-privatization lobbying group, Great Lakes Education Project (GLEP), to shut down public schools.

Another 35 schools are targeted on a second list for state intervention and possible closure in the following school year, 2017-2018. If implemented, the two years of closures would mean a loss of 53 schools in Detroit, nearly half of the newly formed Detroit Public Schools Community District (DPSCD). Under Michigan’s law, these “priority” schools can be closed, taken over by a state-appointed “CEO” with full powers to terminate contracts and fire personnel or be converted into charter schools.

DeVos has long shaped the anti-public education policies in Michigan and has donated heavily to Republican state legislators. However, these measures would never have been implemented without the support of the Obama administration, local Democratic Party officials and, most significantly, the National Education Association and American Federation of Teachers, which have repeatedly suppressed the struggle of teachers, parents and students to defend public education.

Schools set to close by the end of the school year include 16 in the DPSCD, eight in Detroit’s Education Achievement Authority and 14 others throughout the state, including schools in Muskegon Heights, Benton Harbor, Kalamazoo, Pontiac, Saginaw and River Rouge. There is only one charter school on the list.

The mass closures will take place at the discretion of the State Reform Office, which was moved out of the Michigan Education Department and placed under the direct supervision of Republican Governor Rick Snyder in 2015. The additional 35 schools designated as “failing schools,” and on the closure list for 2017-2018, include 29 more in Detroit and others in Flint, Grand Rapids and Warren. All the districts have one thing in common: high poverty rates. The fate of the schools depends on their performances on the Michigan Student Test of Educational Progress, administered this spring.

The schools targeted for closures have been ranked in the “bottom 5 percent” on standardized tests for three years, putting them in the federally designated category “priority school” established by Obama. The policy mandate of “intervening” in low performing schools was further enshrined in Obama’s Every Student Succeeds Act enacted in 2015, following years of defunding public education and directing millions of federal dollars to charter enterprises.

Included on the initial list are 10 Detroit high schools, including Denby, Ford, Mumford and Pershing High Schools, as well as the academies formerly part of Cody and Osborn High Schools.

Parents received a communication from the state suggesting alternative schools, largely in the suburbs, and which are a lengthy or impossible commute. For instance, the East China School District in St. Clair County was cited. For students living near downtown Detroit, this would be a 50-mile trek and only available by car.

“How am I going to get there?” Michele Phillips, asked the Detroit News. Her three children attend Fisher Upper Magnet School. She said she could not afford to pay for public transportation to send her children to a Detroit school a few miles away, much less to the suburbs.

Districts that can demonstrate to the SRO that students will face an “unreasonable hardship” may, by law, be granted a temporary reprieve on closings. Natasha Baker, the head of the SRO and a Snyder appointee, has repeatedly warned that the state will move “aggressively” on closures. She dismissed the idea of “hardship” from the mass closings, telling Crain’s Detroit Business, “transportation issues can be resolved.”

Baker further opined, “I think it’s more disruptive to a community when they graduate thousands of students who can’t read.” Baker was a charter school supervisor in New Orleans before collecting $110,000 in Michigan tax dollars for a Detroit charter (a “ghost charter”) planning grant. The school never opened; she was subsequently given jurisdiction by Snyder over all state “priority schools.”

The DeVos-run Great Lakes Education Project saluted the plans for shutdowns in the name of public school “accountability.” A statement on the GLEP web site emphasized that DeVos “wants to rewrite the education playbook for America.”

On Monday, the Wall Street credit rating firm Moody’s said entire districts could face severe financial hardships because of the loss of students from the school closures. In Michigan, education funding follows the student through a state-managed foundation grant. In the antiseptic language of financial investors, Moody’s notes, “The school closing process adds unpredictability to an already volatile sector and is credit negative for the affected districts because it makes budgeting for operations challenging and threatens revenues.” In other words, entire school districts may find themselves at risk for complete privatization due to student enrollment loss, following districts like Highland Park and Muskegon Heights. 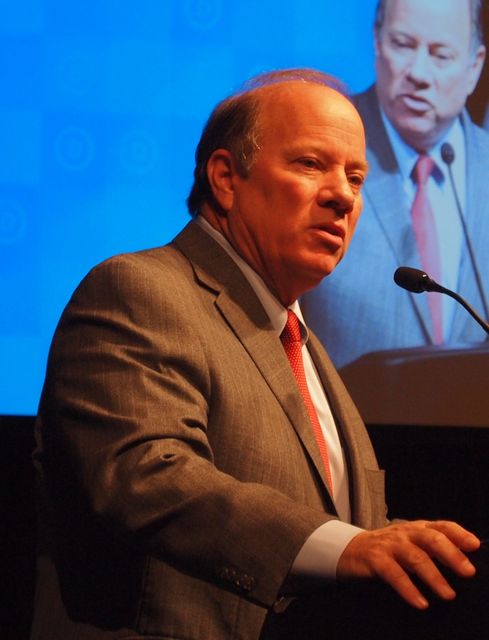 The Detroit Federation of Teachers (DFT) and various local Democrats, including Mayor Mike Duggan, are feigning shock and claiming to be “fighting” the closures. DFT President Ivy Bailey appeared at a rally, together with DPS interim administrator Alicia Meriweather, last Friday at Osborn College Preparatory Academy, one of the schools slated for closure. Duggan kicked off his bid for reelection vowing to “derail” the state’s closure plans. He made a highly publicized phone call to Governor Snyder denouncing the closures as “immoral, reckless and illegal,” pleading with the anti-public education governor to “step in.”

These are the very forces that worked to shut down the wildcat teacher sickouts last year and prevent a mobilization of the working class to defend public education. Workers and young people nationally were inspired by the courageous stand made by teachers, in defiance of the courts, Michigan state law and the Obama administration. The Democrats, Republicans and the teachers’ unions all joined forces to squash the protests and line up support behind the Snyder-sponsored $617 million “rescue” package for Detroit schools, which, as the WSWS warned, only rescued the bondholders and Wall Street, guaranteeing their debt payments and leaving the new district drastically underfunded.

In the run-up to their final vote on the Detroit restructuring plan, state legislators—who had received $1.45 million in contributions from DeVos-affiliated lobbying groups in the previous weeks, not only decided to close the Detroit public school district and replace it with a new charter-friendly district, but also to strip all oversight of charter schools.