“None of these games would be possible without our labor”

Last Thursday, about 500 video game performers and supporters rallied in Los Angeles as the strike against 11 major entertainment corporations, including Activision Publishing Inc., Electronic Arts Productions, Inc. and WB Games, Inc., entered its fourth month. The walkout is the second longest in the history of the Screen Actors Guild-American Federation of Television and Radio Artists (SAG-AFTRA).

The main contending issues are secondary compensation (also known as residuals), safety and transparency. The union’s original demands were limited to a modest additional scale payment, a limit of two hours for vocally strenuous sessions, a provision that includes stunt coordinators to prevent painful injuries, and a request that actors be informed of the project title and role they are being hired for before signing a contract.

The rally marked the two-year anniversary of the bargaining process, which saw negotiations drag out for 19 months before SAG-AFTRA allowed workers to strike. In the face of the intransigence of the entertainment giants, the union has repeatedly offered to reduce its demands. At the same time, SAG-AFTRA and the AFL-CIO have opposed any broader mobilization of entertainment workers, let alone other sections of the working class, to break the isolation of the striking workers.

Signaling his willingness to accept further concessions to reach a deal, the union’s national executive director, David White, said in a statement, “Enough is enough. It’s time for the video game corporations to stop stalling and meet us halfway. Working together we can achieve continued growth for their companies along with fair compensation and safe sets for our members.” 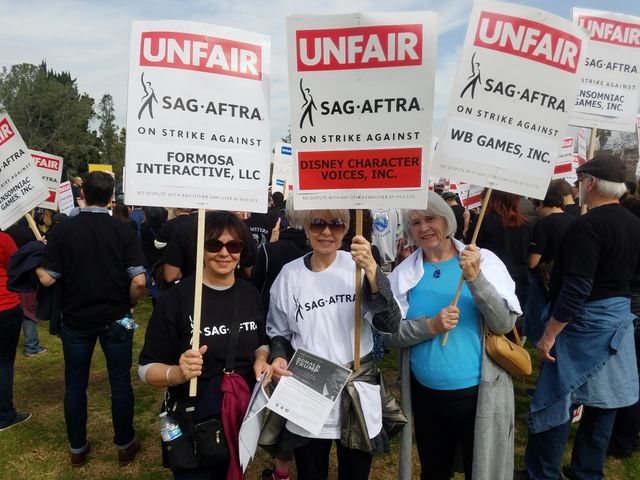 A section of the Screen Actors Guild demonstration

The SAG-AFTRA rally started at the union’s luxurious Los Angeles headquarters followed by a short march a block away to the neighboring La Brea Tar Pits park. The union directed participants off the streets and into the secluded park complex ensuring the action would be seen by as few outside workers as possible.

There is a growing mood of militancy among workers, which has been heightened by the social opposition that has erupted against the Trump administration and its anti-immigrant and authoritarian attacks. The unions are doing everything possible to cordon off striking workers from this growing opposition and limit them to the framework of SAG-AFTRA’s maneuvers with management and the Democratic Party.

Striking workers at the rally were subjected to empty speeches by union and Democratic Party officials, including Art Pulaski of the California Labor Federation and Rusty Hicks of the Los Angeles County Federation of Labor. Los Angeles Democratic city councilman, David Ryu, was careful to confine his comments to criticisms of the 11 video game corporations.

On the grassy field below, among the working actors and their supporters, the mood was much different. The anger against Trump’s anti-worker, anti-immigrant and pro-business policies, not to mention their own difficult social conditions, was palpable and widespread.

One striker, Rob, told the World Socialist Web Site, “We think workers in all unions across the entertainment industry need to be organized together to fight for better wages and working conditions. We’re not interested in dealing with the union officials; we want to speak directly to the membership to create a single organization that represents workers in every sector of the industry.

“People like George Clooney and George Lucas mentioned in your article get rich working under Fi-Core (Financial Core, a provision that allows artists to accept union as well as non-union jobs). They can do that, but it hurts the rest of us that depend on union contracts to get anything approaching a living wage. Jon Voight is another story, he’s a right-wing freak and his views aren’t representative of any of the professionals in the industry I know.”

Kimberly added, “We deserve proper wages for the work we do because none of these games would be possible without our labor. Video games used to be a tiny part of the work but now it’s a multi-billion-dollar industry, yet our pay has remained the same.” 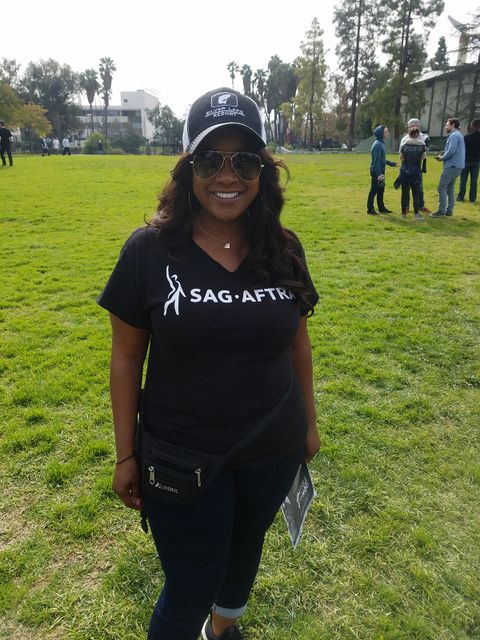 Emphasizing the precarious nature of the work, Kimberly said, “I did an acting job the other day and got paid scale, but you can’t live on that in this city. Very few actors are getting rich doing this work and video game work pays even less.

“The union isn’t asking for very much but it’s a starting point because the big video game producers don’t respect us or the work we do,” Kimberly continued, “and it’s the same at every level of the industry. I think many of the people we work with are so beaten down, they’re so discouraged. They’ve been conditioned not to respect the work we all do that makes this industry possible.”

Drawing a parallel between the new Trump administration and the unrestrained power of large corporations, Kimberly noted, “Trump behaves the same way as these major video game companies that we’re struggling against. They act like they can do whatever they want no matter how it affects us and get away with it. That makes me furious.”

The overwhelming majority of the 160,000 SAG-AFTRA members earn an income comparable to other sections of the working class and most working actors are traditionally forced to find supplemental employment in food-service, hospitality and other fields.

Actors are also being hired for fewer and fewer higher-paying television roles. Instead of being hired as “Major Role” performers—a SAG-AFTRA contract category that would pay an actor a minimum of $4,983 per week for a recurring role on a half-hour show—they are being hired on a one-off basis as “Day Performers” or “Three-Day Performers” This pays actors $906 or $2,294 a week respectively for work that is sporadic and lacks anything approaching job security. Productions often cram multiple episodes into these 1-3 day stints to avoid having to hire actors on a longer basis.