Donald Trump signed executive orders on January 25 and January 27 outlining a series of new measures aimed at setting massive restrictions on immigration to the United States and on tearing those already present in the country away from their children, parents, and other loved ones. Two particularly high-profile components of these measures, the construction of a border wall between the US and Mexico and a travel ban on seven predominantly Muslim countries in the Middle East, have sparked social outrage in the form of mass demonstrations throughout the US and internationally.

Though the travel ban has for the present been halted by the Ninth Circuit Court of Appeals, the other elements of the immigration orders are only just beginning to take effect. The result is a massive ramping up of the deportation apparatus and strengthening of the police state built up under the Obama administration. For millions of undocumented immigrants living in the United States, the future poses the immediate danger of deportation. According to an analysis by the Los Angeles Times, the new orders could result in the deportation of eight million people, with millions more family members affected. The Trump administration’s move to scapegoat millions of immigrants is part of a broader attack on the democratic rights of the working class as a whole.

The language of the domestic immigration enforcement order exposes the deeply anti-democratic character of the orders. Trump proposes to “end the abuse of the parole and asylum provisions currently used to prevent the lawful removal of removable aliens,” despite the fact that asylum applications were rarely granted under the Obama administration. A website put together by Syracuse University tracks the denial rates of immigration judges nationwide. In California, New Mexico, Arizona and Texas, most judges deny between 70 and 99 percent of asylum applicants. One judge in Texas, Howard Rose, denied all 110 asylum applicants who appeared before him between 2011 and 2016. 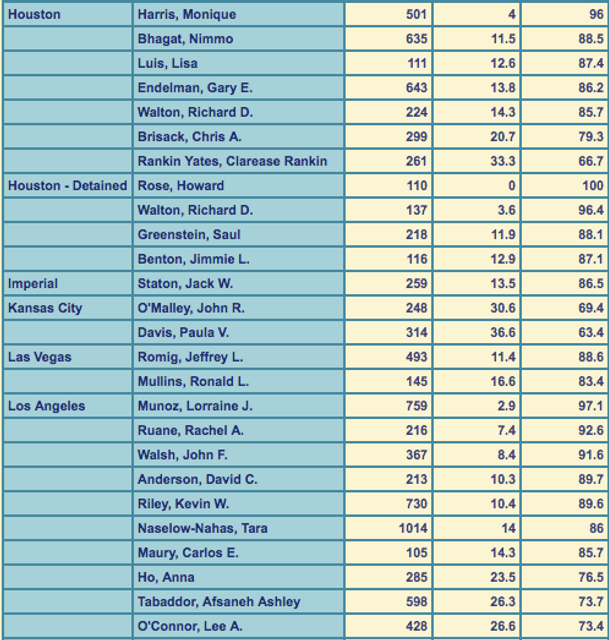 The executive orders will only lead to more denials of asylum applications from deserving migrants. Immigration and Customs Enforcement (ICE) has already issued a call for volunteers from within the agency to travel to border states to aid in processing newly arrived migrants for mass deportation.

The order on border security and public safety will deputize state and local law enforcement to aid immigration officials in leading deportation operations in major American cities nationwide. It also threatens to cut federal funding to “sanctuary cities” where sheriffs and local police are not required to aid federal forces in deporting migrants. The result will be a massive increase in deportations, an increase in workplace and home raids by ICE officials and police, and the incarceration of hundreds of thousands or millions of workers for the “crime” of bringing their families to the US to escape violence or look for work.

The executive orders drastically expand the list of individuals the administration will prioritize for deportation as “removable aliens.” The orders state that even those migrants accused of committing a crime will be removable—a gross violation of due process and the centuries-old presumption of innocence.

Trump has called for the construction of new immigrant detention facilities along the US-Mexico border through both federal as well as for-profit private contracts. He has also directed the Department of Homeland Security (DHS) to “allocate all legally available resources to immediately assign asylum officers to immigrant detention facilities” to conduct credible fear hearings for asylum seekers.

The “credible fear hearing” is the process by which the Asylum Office for US Citizenship and Immigration Services (USCIS) determines whether or not asylum seekers will be allowed to enter the country. If the interviewee does not appear to have “reasonable” or “credible” fear of returning to his or her country of origin, the ICE immediately deports the individual. If the person is found to have a credible fear, he or she has the right to appear before a judge, though most people end up getting deported anyway.

The system is rigged against asylum seekers, with judges and prosecutors paying little attention to the merits of their asylum claims. Officers frequently lie to the courts and submit false testimony in which asylum seekers “admit” that they have no claim. This practice, which took place regularly under the Obama administration, will intensify under Trump. Since Trump took office, immigration attorneys have reported that their clients are being denied the right to appear before a judge even when the migrants were found to have a credible fear of returning to their home countries.

According to a senior US immigration official who spoke to the Intercept on the condition of anonymity, ICE is preparing internally for a drastic increase in deportations. Trump’s executive orders promised to hire 10,000 new ICE deportation officers. The official said, “I can’t think of any other reason than preps for processing a lot of expedited removal cases.” In addition to mass deportations, the measures will produce a vast number of asylum seekers who become trapped in a bureaucratic swamp, detained for months without the right to meet their family and without the ability to easily access an attorney. Under US immigration law, jailed migrants do not have the right to an attorney. The Obama administration’s official position was that children as young as three or four years old do not have the right to an attorney. As a result, they are often forced to appear in court alone.

The state has already set into motion the vast acceleration of deporting immigrants, with raids beginning last week. Immigration agents in Phoenix, Arizona, arrested Guadalupe García de Rayos on Wednesday. Rayos, 35, had been living in the US since she was a teenager, regularly checking in with a local ICE office after being caught using a false social security number to get a job in 2008, as many migrants are forced to do in order to receive a legal wage. The Trump administration is now prioritizing the deportation of these individuals, who were not at the top of Obama’s list for deportation.

Another controversial aspect of Trump’s orders are the resurrection of the DHS-administered Secure Communities program. Began by the Bush administration and expanded by Obama, this program partnered ICE officials with local jails to aid in the sharing of biometric data. It was suspended in November 2014 after pressure from immigration advocates, only to be replaced by a similar initiative known as the Priority Enforcement program.

The second program to be expanded by Trump is the 287(g) program, which allows local and state police to be deputized as immigration officials for the purpose of rounding up migrants for deportation. The Department of Justice (DoJ) and the American Civil Liberties Union (ACLU) have shown on numerous occasions that the program causes racial profiling and routine violations of constitutional rights amongst Latinos.

The proposed economic penalties against so-called “sanctuary cities” have particularly authoritarian characteristics. According to the order’s language, any city that does not abide by Washington’s exact dictates can be considered a sanctuary city and therefore liable for cuts to federal funding, without which cities would be unable to deliver basic services. This is an attempt by the Trump presidency to bring local authorities to heel while creating yet another opportunity to slash municipal budgets and gnaw away at the few remaining social gains of the working class.

According to an analysis by Reuters, a sum of $2.27 billion in annual funds for the 10 largest cities in the US are under threat. This includes hundreds of millions of dollars meant for Head Start preschool programs, public housing and HIV prevention and treatment.

Aware of growing discontent within broader layers of the working class, the American political and media establishment seeks to divert attention from the growing chasm of social inequality by scapegoating immigrant workers and transforming the US-Mexico border into an armed zone replete with internment camps. Though the executive orders represent a qualitative deepening of the breakdown of American democracy, Trump's policies are the outcome of the eight years of record deportations under Obama, who deported 2.5 million—more than all his predecessors combined.