“Health care has been under attack for quite a long time”

Supporters of Planned Parenthood mobilized nationwide on Saturday to counter demonstrations by right-wing opponents of the right to abortion. A collation of abortion foes had called for pickets in opposition to public funding for the organization that supports reproductive health.

One of the first acts of President Donald Trump was to cut funding to international groups that fund or even provide information about abortions. Legislation is pending in Congress that would essentially cut funding for Planned Parenthood. Currently the organization is eligible to receive money from Medicare and Medicaid for such services as birth control and cancer screening.

According to the Congressional Budget Office, plans before Congress would eliminate some $400 million in funding to Planned Parenthood and result in some 400,000 women losing access to care.

There was a large turnout for the counter-protest in defense of Planned Parenthood in many cites, with supporters of the organization often far outnumbering abortion opponents. 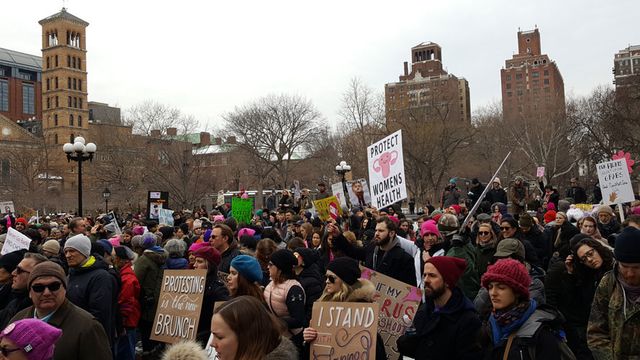 A New York City rally in Washington Square Park against the defunding of Planned Parenthood attracted about 700.

Amia started in September as a first grade, dual-language public school teacher. “I am not happy with having to defend Planned Parenthood. As a teacher, I am also not pleased with [US Secretary of Education] Betsy DeVos.

“I am in a Title I school [funded for low-income students]. Most of the students are Dominican and Mexican. This protest is coming from people who are angry, who are not represented in this government. I am thinking that after Trump we have Pence, and after Pence then Ryan. This is not what we need. People need to vote, to become informed. We need to abolish the Electoral College.

“Hillary Clinton was part of the machine that mills out candidates. And it is not democracy in a system of just two parties. What I learned in college about the US party system is not the case, not true democracy.”

Asked how she found conditions as a new teacher, Amia related, “I am new so I don’t know how things were different. I see older teachers don’t like the way it has become and just want to retire. When I was in school I had things like art. [As a teacher] I have had to sacrifice an art project for a literacy lesson. But they never push to get kids outside or have art. They only have a movement class two times a week.”

She added, “I was recently doing my taxes and never realized that so much union dues are taken out. Union meetings at school are held during prep or lunch periods so you don’t really have time to go. We don’t get informed.” 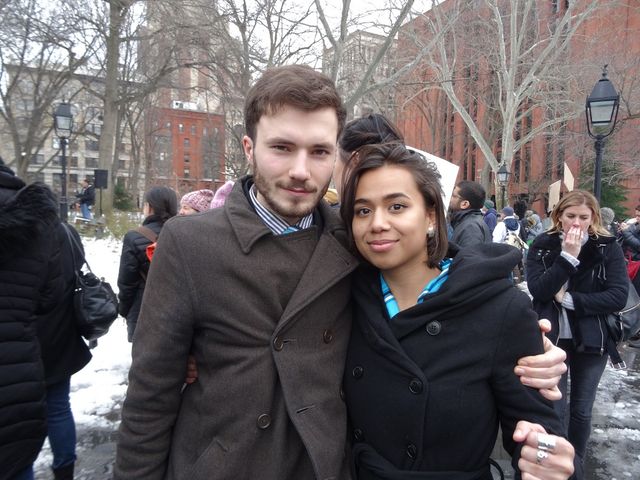 Nathan from Britain and Dylan from Canada were at the Planned Parenthood rally. Nathan noted the similarity between the political conditions in the US and in Britain, where the Labour Party supports right-wing policies.

Asked if he supported socialism, Nathan said, “There has to be a great crisis to make socialist revolution possible…. The system is constructed for elites. They are brainwashing people with the media to keep power for the elite. People need to be educated.”

Jamie explained, “My personal experience is that back in 2001, when I didn’t have insurance, I went to Planned Parenthood for birth control, and they found pre-cancerous cells on the cervix. This leads to cancer, and if Planned Parenthood had not spotted it and referred me to get cryogenic surgery to remove the cells, I wouldn’t be here with my baby today.

“It sickens me that people are voting along these party lines. The Democrats go along with curtailing our health and reproductive rights as well as Trump and the Republicans. This is most often justified by religious reasons based on the views of the Catholic Church. It shouldn’t be this way because our country was founded on the principles of religious freedom. Religion should have no role in our government or health care, especially since there are so many more religions than Christianity. 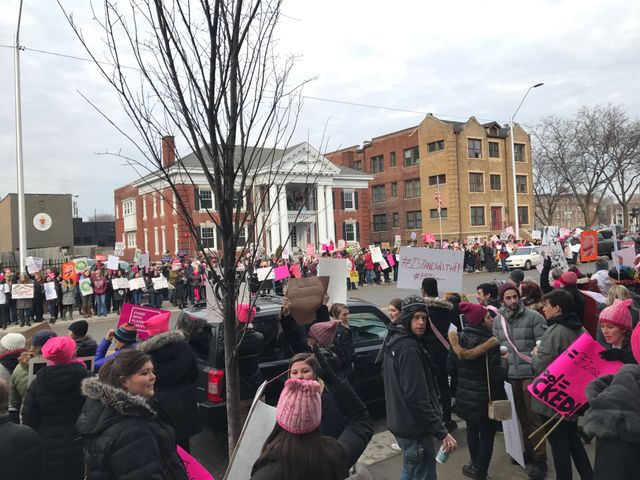 Detroiters demonstrate for the right to abortion

About 700 people gathered in front of the Planned Parenthood offices on Cass Avenue near Wayne State University in Detroit. The protest dwarfed the turnout by a handful of abortion opponents.

Sara, a Wayne State student, commented, “It’s impressive how many people showed up. There are way more counter protesters in support of Planned Parenthood than there are the anti-abortion protesters. I think people are waking up, and realizing that this isn’t a joke anymore.”

When asked about what she thought about Trumps election, Sarah commented, “We can see in the election that the Democrats were concerned with their elitism. Clinton alienated a lot of people, especially working people.”

Eliza, a health insurance worker, explained the role of Planned Parenthood: “It provides safe health care for people who don't have a lot of funding, or who are not comfortable going to their own doctor. Actually, abortion services are only a small portion of what PP [Planned Parenthood] provides. And what the federal government gives is a drop in the bucket compared to other funds. The religious right wants to defund PP, but not everyone can afford to have a baby.”

A WSWS reporting team also spoke to some of the thousands demonstrating in support of Planned Parenthood in the north San Diego suburb of Encinitas.

Karin is a nurse who works at the UCSD medical center. She said, “I think this fight is bigger than just Planned Parenthood, even bigger than just getting rid of Donald Trump. Health care has been under attack for quite a long time. It has actually never been something the government wanted to provide, it’s always had to be fought for by the people.

“We are living in 2017, and this supposed to be an advanced society, but for some reason we still have people with all sorts of basic health problems, and a lot of them are growing. Life expectancy is actually falling. Why is that? The truth is we are not taking care of people, not children, not women, not men, and these people of all races in all places.”

She continued, “It all comes down to money. If you have it then you can have things—education, a nice house and health care, and if you don’t you are at the mercy of the government, so god help you. Planned Parenthood is just one part of it. It’s an important one though, as many poor, or not even that poor, women rely on this for basic health." 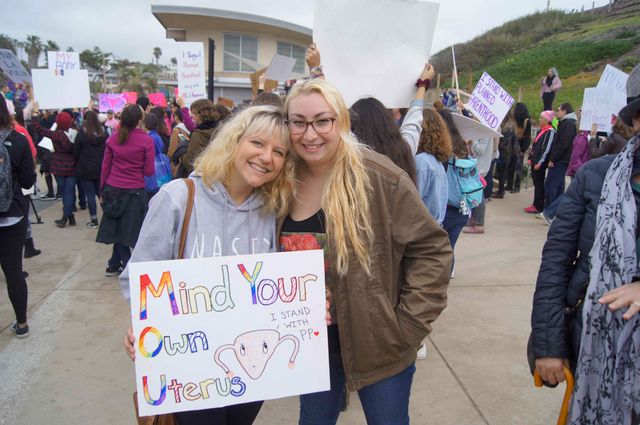 Abby said, “Women’s rights to choose are under attack by the current administration. Planned Parenthood provides services beyond reproductive ones.

“We are becoming very isolated as a country. I ask myself: ‘Am I willing to let people who are in need just die?’ I say no. We need social programs, and not just for citizens. It’s tragic that we don’t support refugees. We need a higher minimum wage and we need free college education as well.”

Andy said, “I am here because I have been sitting quietly at home for too long. Too many people were doing that. And then we got Trump. He is a racist, a misogynist, and I believe a sexual predator as well. We are past the point of waiting. I marched on inauguration day, I marched on women’s day, and I am marching today.

“My friends, some of my Democratic friends, didn’t want me to march here today. They said we should give Trump a chance and let due process play out. But we can’t do that.”

Natalina, a high school student, said, “We are here in support of PP. It’s important for people to know that PP doesn’t just provide abortion, but many essential medical services.”

WSWS reporters asked Natalia and Emily about the other issues confronting people today. In a discussion about socialism and internationalism, Emily said, “Borders are constructed, not real. This land [California] used to be Mexico once. And before that it wasn’t part of a nation-state. Borders, states are archaic and ridiculous.” 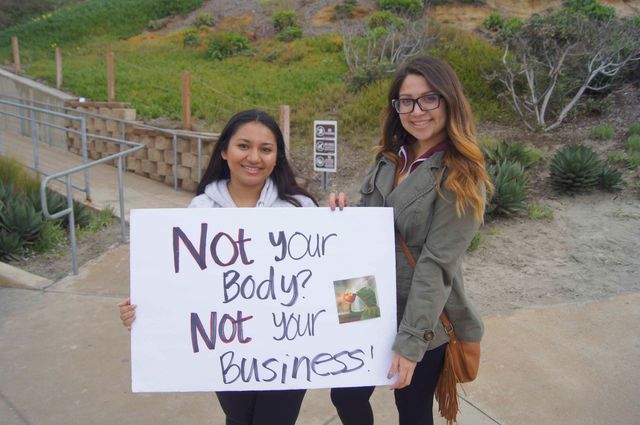 Melissa said, “To me this [abortion] is not a religious question, it is a health issue.”

Kimberly added, “The Trump administration is a joke. His whole cabinet, including Betsy DeVos, are doing away with everything. Trump is saying he’s a working man and he’s here for us, but I bet he’s never even washed dishes in his life. The Democrats and Republicans are the same team. But it’s up to us to make the change.”