Scotland: Thousands protest in Edinburgh against Trump’s attacks on migrants

Protestors were animated by opposition to Trump’s attempt to ban Muslims from the US and his attacks on democratic rights. The protest drew significant numbers of young people, many with homemade placards and banners chanting “refugees welcome here.” 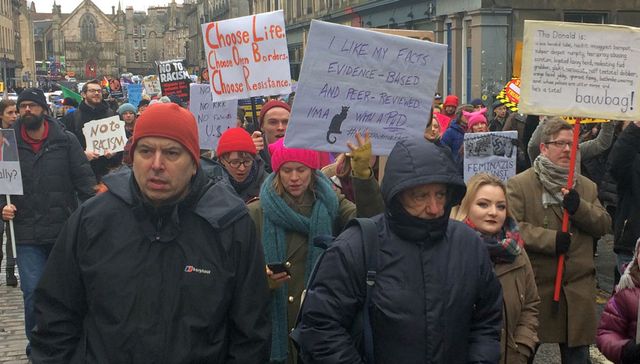 A section of the march in Edinburgh

However, Scotland Against Trump, which organised the event, put forward no perspective to mobilise the working class against the most right-wing, anti-democratic government ever elected in US history. Instead, speaker after speaker extolled identity and single-issue protests, coupled with demands for Trump’s intended state visit to the UK to be cancelled.

These calls are in line with the position advanced by the Scottish National Party (SNP) government and taken up by sections of the pseudo-left, in the aftermath of last year’s Brexit referendum result. The SNP used last year’s UK referendum vote to leave the European Union (EU) to raise the possibility of a new Scottish independence referendum, based on the fact that a large majority of Scottish voters rejected Brexit in favour of the EU.

This was conceived of largely as a threat to extract concessions from the Conservative government for Scottish business interests—who are demanding continued access to Europe’s Single Market—during the Brexit process. The SNP has been central to efforts to cobble together a “progressive alliance” seeking to reverse the Brexit result.

In response to Trump’s travel ban, SNP leader Nicola Sturgeon was the first to oppose a state visit by the new president. She viewed the ban as “counterproductive in terms of the fight we all have an interest in against extremism and terrorism.” 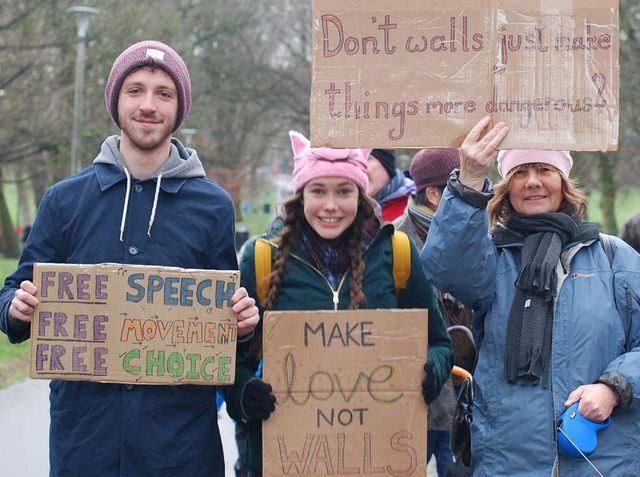 Some of the protesters at the Edinburgh demonstration

The demonstration, having marched past the US Consulate in Edinburgh, headed for the Scottish parliament. The main tendency present on the platform was the pseudo-left RISE coalition (Respect, Independence, Socialism, Environmentalism). Its chair was RISE co-founder, Jonathan Shafi, of the International Socialist Group, a right-wing breakoff from the Socialist Workers Party. Shafi has no differences with the SNP, with RISE under his leadership functioning as a “left” nationalist advisory group. Prior to forming RISE, Shafi was a senior researcher for SNP Member of the Scottish Parliament, Jean Urquhart.

From the standpoint of Scotland Against Trump, the demonstration was the occasion to encourage the SNP to move towards support for ending the “special relationship” between Britain and the US. RISE supporters carried placards to that effect. Rather than explain anything of genuine significance regarding Trump or what his administration means for America and the world, the pseudo-left are simply seeking to chivvy the SNP towards an alliance with a rival faction of the capitalist class—based on retaining British links with the EU.

On this basis, refugee rights activist and RISE candidate for the last Scottish parliamentary elections, Pinar Aksu, called for the left to unite against Trump. 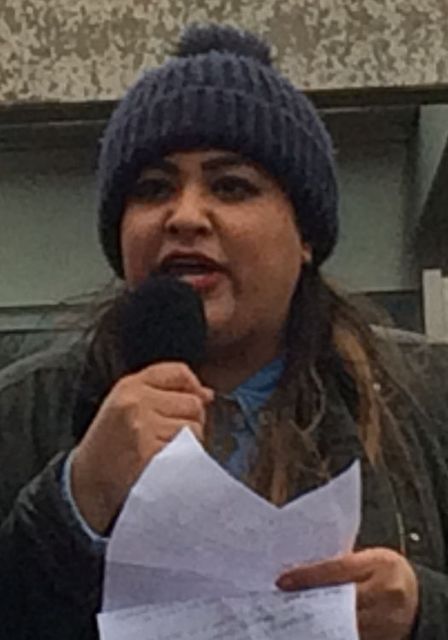 Suki Sangha, vice chair of the Black Workers committee for the Scottish Trades Union Congress—and another former RISE candidate—insisted that Trump, May and the far right should be opposed by “building the biggest movement possible” declaring, “[the] real enemy is the one percent.”

Such references to the “one percent” versus the “99 percent” are routinely employed by the pseudo-left as a mechanism for subordinating the working class to the upper-middle class, which makes up 9 percent of the top 10 percent. Its goal is a redistribution of wealth within the higher echelons of society to be secured through demanding special privileges based on race, gender and sexual orientation.

Sangha ended with a call to build the trade unions, the very organisations whose decades-long betrayal of every struggle in defence of workers living standards and rights has led them in the US, to seeking an alliance with Trump on the basis of a shared support for a protectionist “America First” agenda.

Long before the rally ended, most participants had drifted off, disenchanted with what they heard. Indeed, as with more recent demonstrations elsewhere, turnout was significantly smaller than the largely spontaneous gathering of many thousands of mostly young people in Scotland on the nights immediately following Trump’s inauguration.

Supporters of the Socialist Equality Party distributed hundreds of copies of the February 9 WSWS article, “Week three of the Trump presidency: A crisis of bourgeois rule and turn toward dictatorship.” The column concluded that in the struggle against Trump and the oligarchy he represents, “The central strategic question is the building of an independent revolutionary leadership in the working class, opposed to all of the political representatives of the ruling class, which connects the defense of democratic rights to the fight against war, inequality and the capitalist system.” 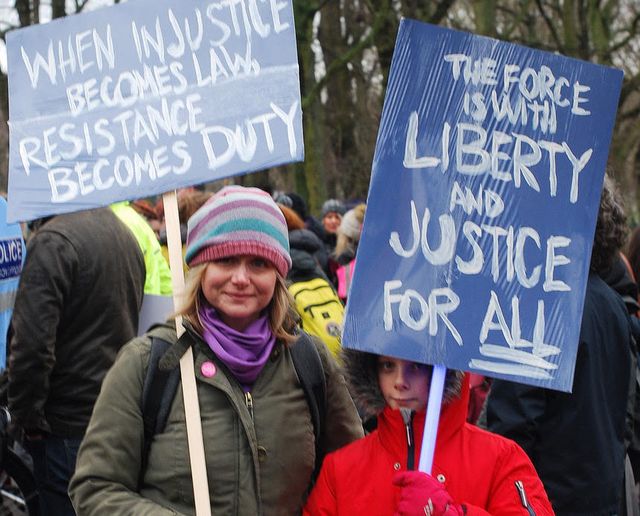 A mother and her son on the protest

SEP supporters spoke to some of the participants.

Browen said of Trump’s Muslim ban, “People should be free to go where they like and this would break down barriers between people such as the way you look, the way you talk, where you are from.”

Tim, a student from Berlin, Germany, came to Scotland two weeks ago. He said, “We turned out for the demonstration because of what is happening all over Europe. We are from Germany and we cannot sit at home and do nothing.

“The way the Trump administration is attacking the judiciary in the US is something you have not seen before in America. It remains to be seen whether democracy or the constitution will prevent these kinds of assaults on the democratic structures and the checks and balances of the country, or if it is a real threat.”

Asked what he thought about the impact of the global financial collapse in 2008, and the rise of far-right-wing movements since, Tim said, “The economic crisis has had an impact on a lot of people in the western countries. A lot of people felt they had lost out or had been left out with the crisis. The right-wing movements across Europe and North America shows us that politics is being made on fear, and not on rational thought, or tackling things. It just leads to more isolation and in the wrong direction and denies the reality of a globally-organised world.”

Speaking about the possibility of French neo-fascist Marine Le Pen winning the upcoming French elections, he said, “France is going to be a major threat for Europe if she turns out to have such a large following that she could become a winner this year.”