Renowned for playing outsiders and “commoners,” British actor John Hurt died January 25, three days after his 77th birthday. With a gravelly voice, nondescript looks and a generally gentle demeanor, Hurt was not the “leading man” of his day and yet his recent passing is a sad occasion.

There are different sorts of actors. Some insist, rightly or wrongly, on bending as much as they can a given work or production to the strength (or weakness) of their personality. Hurt belonged to another school, those who apparently surrender themselves entirely to the material at hand. An incredibly versatile and lively performer, with more than 200 film and television credits (along with numerous stage appearances), he seemed to throw himself headfirst into each role and fully convinced audiences whether he was playing a diabolical hitman, a bookworm, a desperate drug addict or a wily, corrupt politician.

John Vincent Hurt was born in Chesterfield, Derbyshire, a dozen miles south of Sheffield, on January 22, 1940 to Phyllis, an engineer and one-time actress, and Arnould, a mathematician and Anglican clergyman. His father served as vicar for a time in nearby Shirebrook, a coal-mining village. 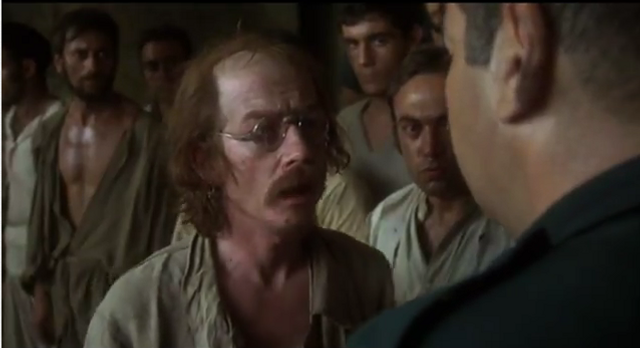 His was a strict religious upbringing. Hurt would later recall, “My parents’ lot had literally crawled away from the Second World War, taking with them two vital commodities by way of a survival mechanism: respectability and security. It was odd, coming from a Christian household, but the big thing was about not being what they called ‘common’. I got all that, ‘Don’t play with him, he’s common’. … My mother was desperate I should be properly influenced, have a proper, received accent, be sent away to school at eight. So all you can do is go into yourself, immerse yourself in your own life.”

Although the family lived across from a cinema, he was not allowed to see any of the films there. When he was eight, Hurt was sent to the Anglican St. Michael’s Preparatory School in Otford, Kent, where he was sexually abused by the headmaster.

He would describe St. Michael’s as one of “those very rarefied, very Anglo-Catholic establishments where they rejoiced in more religious paraphernalia and theatricality than the entire Vatican. … Three times a day they played the Angelus. When you heard it, you had to stop whatever you were doing, do the Hail Marys in your head, and then return to what you were doing. Like it would come in the middle of a Latin class. I’m just conjugating the love verb, amo, amas, amat, and doingggg! you have to stand up, go through the whole Angelus, mother-of-God thing and then crack on with amamus, amatis, amant. Sir! Because, if you didn’t, Whack! Cane. Belt. Education by fear.”

Hurt’s parents did not take his acting ambitions seriously and wanted him to become an art teacher instead. When his headmaster asked him what he wanted to do with his life and Hurt replied acting, the former laughed and told him he “wouldn’t stand a chance in the profession.”

In 1960, Hurt was accepted into the Royal Academy of Dramatic Art, on a scholarship, and made his stage debut in 1962. His first film role was in the Young and Willing (Ralph Thomas, 1962), an entry in the “Angry Young Man” genre of British films and plays. 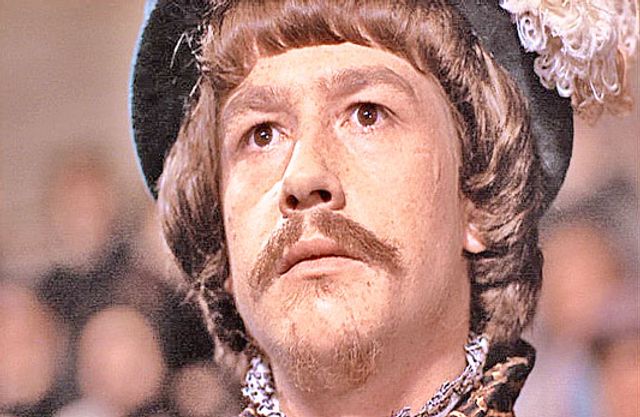 Hurt achieved greater recognition as Richard Rich in A Man for All Seasons. The film was released in 1966 and was directed by Fred Zinnemann (of High Noon and From Here to Eternity fame). The film is based on Robert Bolt’s play of the same name. It tells the story of Sir Thomas More (author of Utopia, 1516) and his refusal to sign a letter asking Pope Clement VII to annul the marriage of King Henry VIII and Catherine of Aragon.

Hurt plays Richard Rich, a villain who perjures himself to become Attorney-General for Wales, to whose perfidy More responds, “Why Richard, it profits a man nothing to give his soul for the whole world … but for Wales?” The film notes in the end that Rich “died in his bed,” while More died for his principles.

In the 1970s, Hurt was able to take on a series of varied roles such as the gay writer and raconteur Quentin Crisp in the 1975 television movie, The Naked Civil Servant (Jack Gold). He also played the infamous Roman emperor Caligula in the 1976 television film, I, Claudius (Herbert Wise), based on the books by Robert Graves.

In 1978, he was unrecognizable as a tortured Turkish prison inmate in the overrated Midnight Express (Alan Parker), but audiences of a certain generation are more likely to remember him as the spaceship crewmember Kane, whose body becomes host to a parasite in 1979’s Alien (Ridley Scott). The much parodied scene where the eponymous alien bursts out of his chest over the dinner table may not have been worthy of the Old Vic, but it is unforgettable all the same.

On television he also played the starving, murderous student Raskolnikov in a 1979 BBC adaptation of Dostoyevsky’s Crime and Punishment (Michael Darlow) and played the Fool to Laurence Olivier in the lead in Shakespeare’s King Lear (Michael Elliott, 1983). 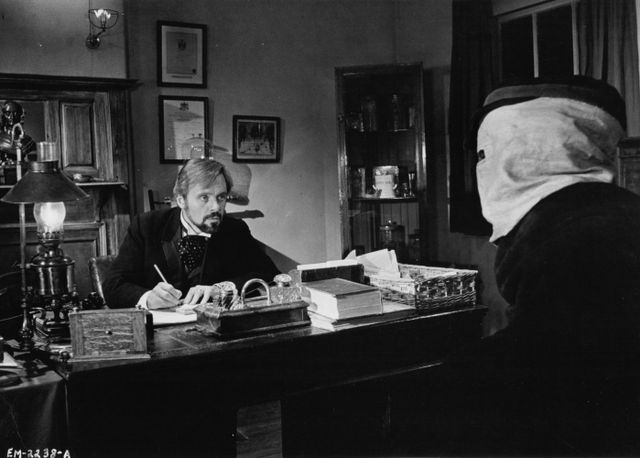 One of Hurt’s most endearing and memorable roles was as John Merrick, a horribly deformed man living wretchedly in Victorian England in David Lynch’s 1980 film, The Elephant Man. Coming on the heels of Lynch’s surreal, Eraserhead (1977), this was a straightforward telling of a true story, but executed with considerable compassion and humanity.

Hurt’s Merrick is confined to a cage and exhibited as a monster in a traveling freak show before being taken in by London’ high society. We learn in the film that he is not a brute but a sensitive soul, who screams in the film’s climax, “I am not an animal! I am a human being! I … am … a man!” Hurt was able to transform a forgotten and hideous creature into something capable of respect and decency.

New York Times critic Vincent Canby wrote in 1980 that “what we eventually see underneath this shell is not ‘the study in dignity’ that Ashley Montagu wrote about, but something far more poignant, a study in genteelness that somehow suppressed all rage. … Throughout the film one longs for an explosion.” He added, “Mr. Hurt is truly remarkable. It can’t be easy to act under such a heavy mask.”

It should be noted this was on the eve of the full-blown Reagan-Thatcher era, before the blockbuster phenomenon and the precipitous cultural decline still with us. Significantly, the very next film Hurt would make was Heaven’s Gate (Michael Cimino, 1980), the extraordinary work that marked the virtual end of a certain trend in independent Hollywood filmmaking.

Lynch would go on to make the interminable Blue Velvet (1986), his olive branch to the forces of law and order and conformity, while Hurt would have to make do for the most part with Hollywood dreck. One can only imagine what art he might have created or participated in under different social and cultural conditions.

Unfortunately, younger audiences will only know of Hurt from his roles in the Harry Potter films (Chris Columbus, David Yates), Hellboy (Guillermo del Toro, 2004), the most recent incarnation of the Doctor Who television series, V for Vendetta (the Wachowski brothers, 2005) and a host of even lesser movies. However, in the same period he also took on interesting roles in the film version of George Orwell’s 1984 (Michael Radford, 1984), Contact (Robert Zemeckis, 1997) and Tinker Tailor Soldier Spy (Tomas Alfredson, 2011), as well as the remake of Graham Greene’s Brighton Rock (Rowan Joffe, 2010). 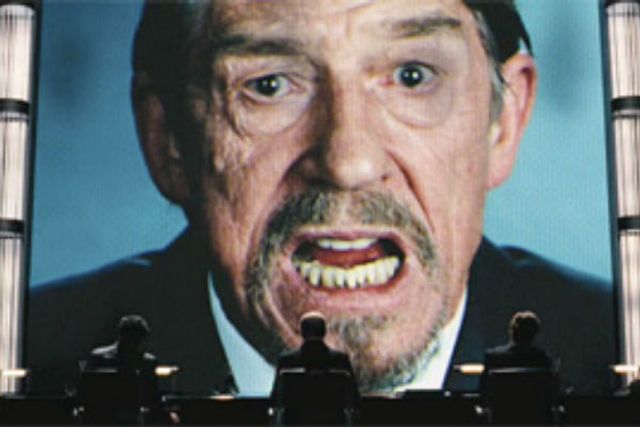 He also lent his vocal talents to such animated films as Watership Down (Martin Rosen, 1978) and documentaries like Human Planet (2011).

True to his independent spirit, Hurt was contemptuous of fame and celebrity, telling an interviewer in 2011, “I’m not interested in awards. I never have been. I don’t think they are important. Don’t get me wrong, if somebody gives me a prize, I thank them as gratefully as I know how, because it’s very nice to be given a prize. But I don’t think that awards ought to be sought. It encourages our business to be competitive in absolutely the wrong way. We’re not sportsmen; we’re not trying to come in first.”