Iowa’s Republican Governor Terry Branstad signed legislation Friday which guts state employees’ rights and paves the way for the further decimation of workers’ living standards. The bill is modeled on the Wisconsin anti-worker law which provoked mass demonstrations in 2011, and went into effect immediately.

The 68-page legislation prohibits contract negotiations between state employers and public employee unions over any issue except base wages. Health insurance premiums and out-of-pocket costs, pensions and retirement packages, vacation and other paid time off, and working conditions more broadly will all be barred from negotiations and may now be unilaterally dictated by state employers.

In instances in which negotiations reach an impasse and move to arbitration, wage increases will be capped at 3 percent or the Consumer Price Index (CPI), whichever is lower. The governor will also retain the authority to reject agreements reached between state institutions and public employee unions.

A ban on strikes by public employees—first implemented in the 1974 collective bargaining law which the current bill replaces—will remain in effect.

Although Iowa has been a “right-to-work” state since 1947, the new legislation is also aimed at further undermining the income and influence of the trade union bureaucracy. As with Wisconsin’s Act 10, the automatic deduction of dues from public employees’ paychecks will be eliminated, and the unions will be required to gain recertification by the majority of the bargaining unit prior to each new contract.

The new legislation will impact approximately 184,000 workers throughout the state. Teachers; state and county workers; nurses, social workers, pharmacists and other staff for University of Iowa Health Care; faculty at University of Northern Iowa; and graduate student employees at the University of Iowa will all be affected. Meanwhile, those who are designated as “public safety” employees—including police officers, state troopers, and sheriff’s deputies—will be excluded from the restrictions.

Republican State Senator Jason Schultz, one of the sponsors of the bill, defended it under the fraudulent cover of “fiscal responsibility,” saying, “It will allow the state, city governments, county boards of supervisors and school boards to innovate with the times and manage their finances, without fear that the unions and unelected arbitrators will stand in the way.”

The legislation was first introduced on February 7 and was fast-tracked through committee deliberation. After Democrats attempted to stall passage of the bill through debate on a series of amendments (in a largely ceremonial gesture, since Republicans control both chambers and the governorship), a vote was moved Thursday afternoon via a procedural maneuver. The bill was passed in both chambers largely along party lines, with six Republicans in the House joining Democrats to vote against it. According to press reports, public employees gathered in the Senate gallery booed as the vote was taken.

The Democrats directed the bulk of their efforts to amend the bill by calling for the inclusion of prison guards and university police under “public safety” category, ultimately unsuccessfully. Demonstrating that the Democratic Party did not fundamentally disagree with the Republicans over the basic aim of lowering workers’ living standards, Democratic State Senator Nate Boulton also proposed an amendment in which a “health insurance study committee” would be created and tasked with cutting government health care costs—in other words, workers’ health benefits.

Boulton begged Republicans to retain a democratic veneer in the ongoing attack on workers, saying, “Let’s work together to find a way to solve your concerns to this by bringing employees in and working with management.” 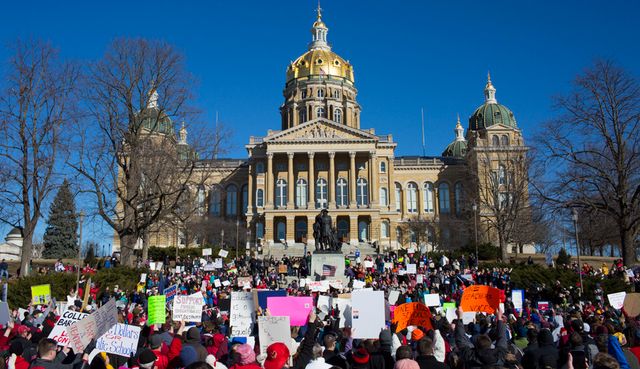 The attacks on collective bargaining rights have provoked significant opposition among workers in Iowa. On Sunday, several thousand teachers, state workers and students demonstrated in Des Moines, the state capital, during the March for Iowa’s Teachers.

William Lairsey, a 40-year-old electrician at the rally, told the Des Moines Register, “You start taking teachers’ rights away and diminishing the quality of education, that doesn’t lead to a good future for anybody.”

“People run on religion and fear of immigration to get into office, then they get into office and worry about corporate interests. It all boils down to money.”

A high school senior at the rally, T.J. Foley, spoke out against the proposed changes, saying, “The rights of our teachers and workers are under siege…As the son of a teacher, I stand before you today as a representation of the 485,000 public-school students who will be adversely affected by this ill-informed and misguided legislation.”

On Monday, over 1,000 signed up to testify in opposition to the bill at a public hearing at the state capitol, with only a few being allowed to speak.

While workers are opposing the new legislation as an attack on their democratic rights and a prelude to further demands for “sacrifice,” Democratic Party politicians and the trade unions have opposed the bill from the standpoint of quite different considerations.

The Democrats, for their part, agree with the necessity of imposing cuts on workers, but wish to maintain the funnel of campaign contributions and support from the unions. More fundamentally, they are concerned that the Republicans’ attempt to dispense with the unions as middle-men will lead to a social explosion outside their control.

As Democratic state congressmen explained to Republican Governor Scott Walker in Wisconsin in 2011, they had pushed through the biggest cuts to the state budget in its history under Democratic Governor Jim Doyle without provoking mass protests by working with the unions.

For the union bureaucracy, they are above all concerned with maintaining their income flow, privileges, and a “seat at the table,” not with defending the rights and living standards of the workers they claim to represent. They see the writing on the wall in Wisconsin, where public and private employee union membership has fallen by 40 percent since 2011.

As the World Socialist Web Site explained at the time of the 2011 protests, “By declaring their willingness to accept every concession beforehand, [the unions] have given up collective bargaining, if this term is to have any substantive meaning at all—that is, the right of the workers to fight against the demands of the corporations and the state. The unions have already bargained away everything, leaving the working class to collectively suffer.”

The unions’ willingness to fully cooperate in enforcing the dictates of the employers has been strikingly demonstrated in their rush to sign concessionary contracts before Iowa’s collective bargaining bill passed.

Tammy Wawro, president of the Iowa State Education Association teachers union, said that unions have reached agreements with over 140 school districts in the last week. A report in the Des Moines Register noted, “Some unions are making concessions in order to expedite negotiations. In Ottumwa, teacher transfers will no longer be solely based on seniority. Forest City will have a new insurance plan, saving the district money. Iowa City will limit newly hired, veteran teachers to wages that align with 8 years of experience, but the ability to increase pay afterward. And in Des Moines, teachers will forgo base wage increases, although they’ll see increases in their total benefits package.”

As with Wisconsin, the unions in Iowa are utterly opposed to mobilizing the full strength of the working class, even under conditions where their institutional interests are at stake. Instead, they organized toothless campaigns to call state legislators and the governor.

Additionally, Danny Homan, the president of Iowa’s American Federation of State, County and Municipal Employees (AFSCME) Council 61, has stated that the union will file a lawsuit challenging the constitutionality of the legislation once it is enacted. Again, as in Wisconsin, where the state Supreme Court eventually sided with Walker and rejected the unions’ legal challenge of Act 10, the unions are falsely promoting illusions in the “neutrality” of the courts, which are in reality wholly beholden to the defense of corporate interests.

The attack on collective bargaining in Iowa follows $117.8 million in state budget cuts passed at the end of January. Those cuts primarily target state services and higher education.

The legislation is one of a series of reactionary measures by state governments targeting workers across the country. The Republicans consolidated their control over a majority of state governments in the 2016 elections, in large part due to the collapse in voter turnout for the Democratic Party and its pro-war, pro-Wall Street presidential candidate, Hillary Clinton.

Since the beginning of the year, Missouri and Kentucky have both passed “right-to-work” legislation. The Trump administration is also reportedly considering how it might expand the attacks on collective bargaining to federal employees, inviting Walker to discuss the issue with Vice President Mike Pence at the White House at the end of January.