Thousands protest in Boston against Trump’s threats to science

Thousands gathered in Boston’s Copley Square on Sunday chanting “Stand up for science.” Many carried placards illustrating the importance of science for society and how it is coming under attack from the Trump administration and its anti-science supporters. One sign read: “Didn’t die of infections? Thank a scientist,” while another declared: “Object Reality Exists.” 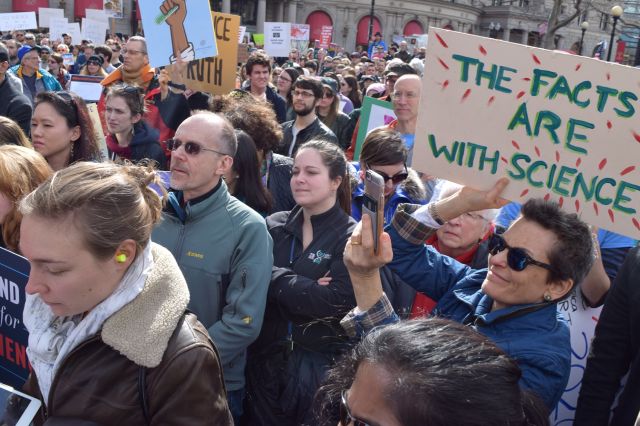 A section of the crowd at Copley Square

The rally coincided with the annual meeting of the American Association for the Advancement of the Sciences (AAAS), the world’s largest general scientific society, held at the nearby Hynes Convention Center in downtown Boston.

The theme for this year’s conference was “Serving Society Through Science Policy.” The meeting announcement on the AAAS web site states in part:

“How can we most effectively provide scientific evidence that informs policy? What are the roles for scientists as individuals and for the scientific enterprise as a whole in the policy landscape? What emerging and established areas of science are essential to future policy decisions?”

Many of the conference attendees joined the protest in Copley Square to express their opposition to the Trump administration’s rejection of science on issues such as climate change and health care.

The WSWS spoke to Deryl, who said she came to the rally in defense of truth. “I’m here just to support science and truth and what is empirically evident. They just deny science. They keep throwing factoids at it and they are not right. They just confuse the issue and then you really can’t have a serious debate about the real issues, because you are always trying to defend yourself against these crazy factoids.” 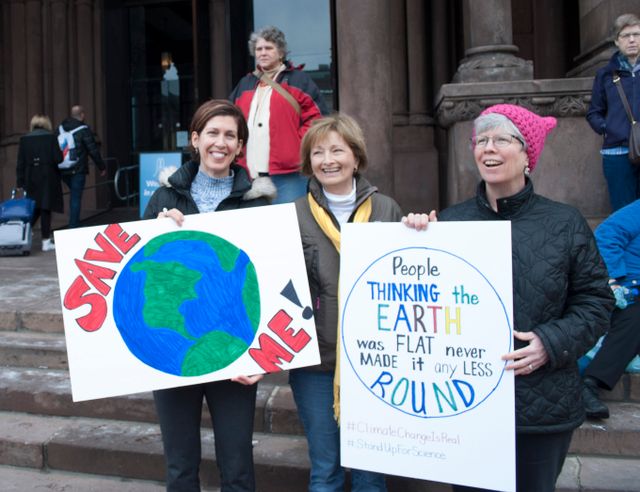 Beka Economopoulos, director of the National History Museum and one of the protest organizers, addressed the protest: “Scientists are real life superheroes. They solve problems, and they protect the people and places we love: health care, climate science, research on lead levels and water quality all protect people.”

“This is about freedom of inquiry,” Economopoulos declared. “From the muzzling of scientists and government agencies, to the immigration ban, the deletion of scientific data, and the defunding of public science, the erosion of our institutions of science is a dangerous direction for our country. Real people and communities bear the brunt of these actions.”

WSWS reporters spoke to Cammille and Dale. Asked why he came to the protest, Dale said, “We are worried about Trump and what he is enacting, especially because he is a denier of climate change. And so we have a president that doesn’t believe in something that scientists know is a fact. He is not a fact-based person and he defies logic, I think. So we are afraid of how much harm he is going to do.”

Cammille said, “I think that right now science is being suppressed and people are not allowed access to data sets that they have already compiled. If you can’t have an agreed upon set of what is real and what is not real, you really have no basis for a democracy. It’s a huge threat not just to the environment, but to democracy as well.”

The day before the protest, volunteers gathered at the Massachusetts Institute of Technology (MIT) for a “DataRescue” event intended to “Help identify, back up, and preserve at-risk federal data.”

Agreeing with the need to protect data, Cammille said, “I have read about efforts in government agencies to preserve data, not just with the hackathon at MIT, but it has been an ongoing thing. People have been backing up their data, saving it to servers outside of the United States. If you use a data room that is on a server outside of the United States, then you are not subject to the US Patriot Act, so your data is more protected.” 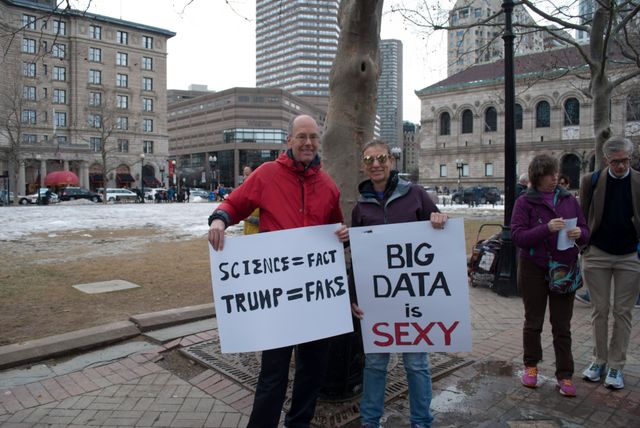 Asked about the connection between the denial of science and the broader policies of the Trump administration, Cammille said, “It’s all about making the oil and gas industries rich. Trump will say, ‘Oh, I’m going to bring coal jobs back.’ Well what made coal jobs go away was the fact that at the moment gas is cheaper because of fracking. So he is using popular sentiment to say that he’s going to help people, but the reality is that he is going to help only the people that are in the oil and gas industry. And he’s helping the people that are in investment banking despite the fact that he said he wasn’t going to do that.”

“I can’t stand the idea of politicized science, of trying to specifically fund stuff for political goals. The idea that there are somehow facts that can be just ignored in favor of politics, it’s not right. It’s not the truth and I feel like Trump doesn’t understand that. He lies all the time and it’s not the truth. It’s not what scientists say and we should trust the experts, because they are the ones who know what they are talking about. They are the ones who are researching these things.

“There are going to be so many cutbacks to the EPA [Environmental Protection Agency] and to lots of different grad programs that help young scientists grow up and grow smarter. They need these grants, which are really important. The devil is in the details and these really important organizations are just going to go.”

Dionna said of the decision to appoint former Oklahoma Attorney General Scott Pruitt to head the EPA, “It’s total and pure corruption. It’s insanity really. Liars for hire, is what it is. It’s not really about politics, at the end of the day it’s about profits for a few people at the expense of everything else that is worth living for on this planet.

“I have a daughter who studied biology and fisheries management and she has decided not to go to grad school in that area because she thinks Trump is going to cut all of the research dollars. She would like to go to a grad school program and she would like to be a fisheries biologist, but she feels like she can’t because of the cutbacks. There aren’t many jobs as it is right now, and what is more important than the health of our ocean? We are funding the wrong thing. We give tax subsidies to oil companies and we won’t fund kids going to school for vital research into sustainability.”