This week in the Russian Revolution

By the winter of 1916-1917, the World War on the Eastern Front had brought Tsar Nicholas II’s armies to the verge of collapse. Casualties for the Russian Empire approached six million dead, wounded, missing and captured. The army was woefully undersupplied. Mutinies proliferated against an incompetent officer corps indifferent to the suffering of the overwhelmingly peasant army. In Russia, as well as in Germany and even the United States, food prices grew rapidly, provoking increasing social unrest. 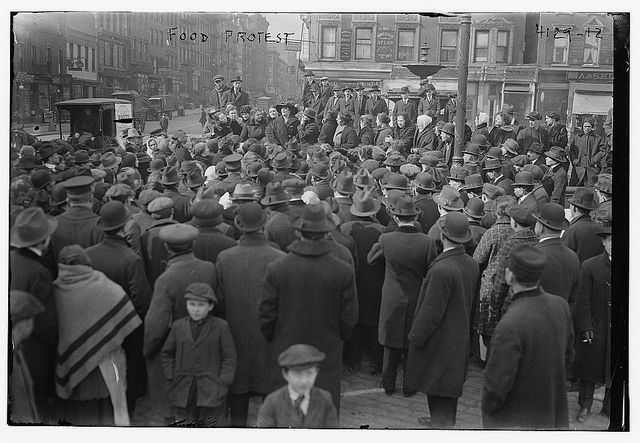 A wave of hunger riots begins in the United States as consumer prices skyrocket, driven by the immense profits American capitalism is reaping from the war in Europe. In New York City’s East Side, thousands protest with women chanting, “We want food for our children.” Thousands are involved in bread riots in Brooklyn. The protests quickly spread to Philadelphia and Boston.

The Bolsheviks call for a general strike in Petrograd to protest the anniversary of the arrest of their Duma contingent, which had taken place earlier in the war. Only a few factories respond to the strike, and those that do are not out for long. According to Victor Chernov, a leader of the peasant-oriented Socialist Revolutionary Party, the limited success of the strike “convinced the political police of their own strength and of the workers’ helplessness.” 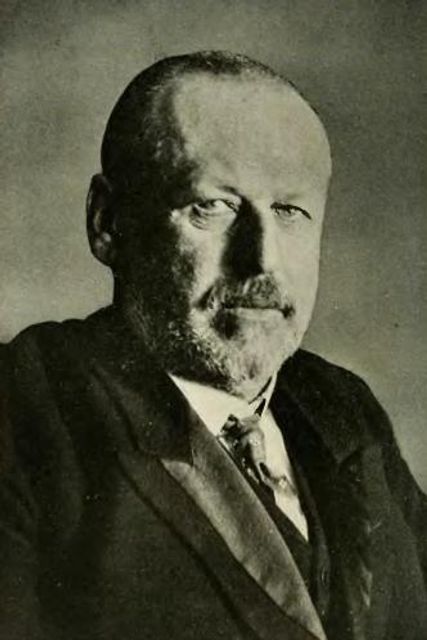 Mikhail Rodzianko, president of the Russian Duma, travels to Tsar Nicholas’ elaborate palace, Tsarskoye Selo, to plead for changes to the Tsar’s cabinet and greater powers for the Duma to avert social upheaval. Nicholas is “cool” toward these entreaties, according to Rodzianko, an Octoberist and Constitutional monarchist who sought to save the Tsarist regime from itself.

Rodzianko later writes a warning to Nicholas: “The situation of Russia now is catastrophic... for at least three months we have to expect an extreme sharpening on the food market, bordering on an all-Russian famine. The situation with the fuel is not better.” He goes on, “It is close to midnight, and the time is all too near when any appeal to the reason of the people will be too late and in vain.” 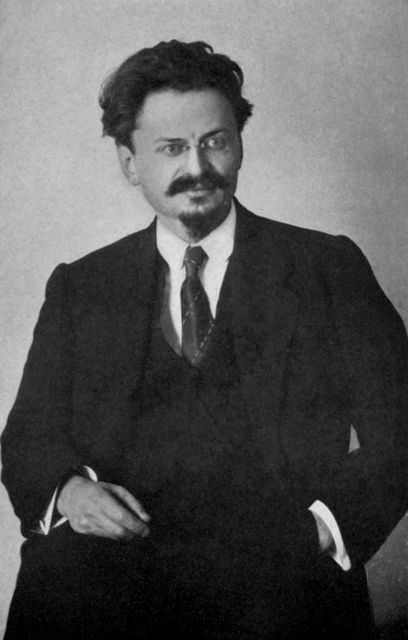 Trotsky later writes: “Nicholas II inherited from his ancestors not only a giant empire, but also a revolution. And they did not bequeath him one quality which would have made him capable of governing an empire or even a province or a county. To that historic flood which was rolling its billows each one closer to the gates of his palace, the last Romanov opposed only a dumb indifference. It seemed as though between his consciousness and his epoch there stood some transparent but absolutely impenetrable medium… In the saying of Goethe about reason becoming nonsense—‘Vernunft wird Unsinn’—this same thought is expressed about the impersonal Jupiter of the historical dialectic, which withdraws ‘reason’ from historic institutions that have outlived themselves and condemns their defenders to failure. The scripts for the rôles of Romanov and Capet were prescribed by the general development of the historic drama; only the nuances of interpretation fell to the lot of the actors. The ill luck of Nicholas, as of Louis, had its roots not in his personal horoscope, but in the historical horoscope of the bureaucratic-caste monarchy. They were both, chiefly and above all, the last-born offspring of absolutism. Their moral insignificance, deriving from their dynastic epigonism, gave the latter an especially malignant character.” (Excerpts from History of the Russian Revolution, Volume 1, Chapters 4 and 6) 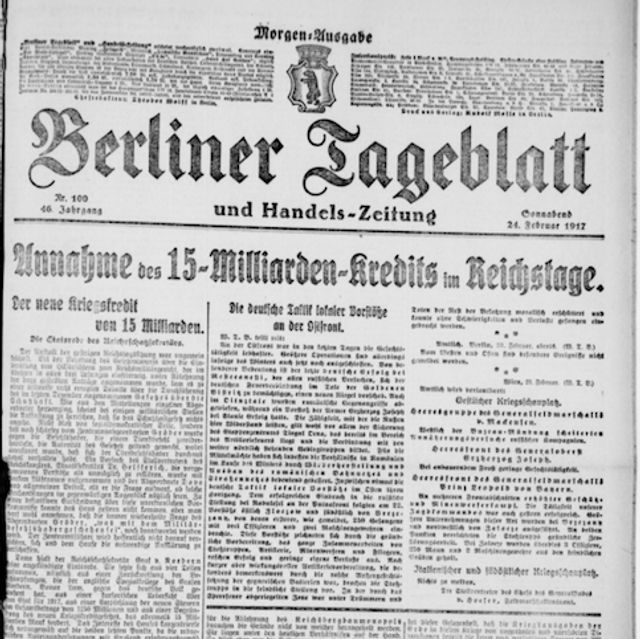 In Germany, the mass social democratic party, the SPD, agrees to new war credits. At 15 billion Reichsmarks, it is the largest single credit hitherto granted to the German government, bringing the total sum of credits for the war since 1914 to 79 billion.

The decision comes amidst what is the most devastating “hunger winter“ in German history, claiming the lives of tens of thousands of people. The next day, due to severe shortages in fuel and wood, all schools in the German capital of Berlin are closed.

SPD delegate Georg Ledebour, who heads a minority faction in the SPD that increasingly opposes the party’s pro-war policies, rejects the credits in the Reichstag debate as a “vote of confidence” for the government. He argues that a party that agrees to the credits “bears responsibility for the war goals of this government and for the means which this government deems necessary for the implementation of these goals.”

In 1914, the German SPD—the biggest and most influential party of the Second International—had played a key role in paving the way for the First World War in agreeing to the first set of war credits. In her Junius Pamphlet of 1915, Rosa Luxemburg described this historic betrayal as the “The most precipitous fall, the most violent collapse. Nowhere has the organization of the proletariat been yoked so completely to the service of imperialism.” 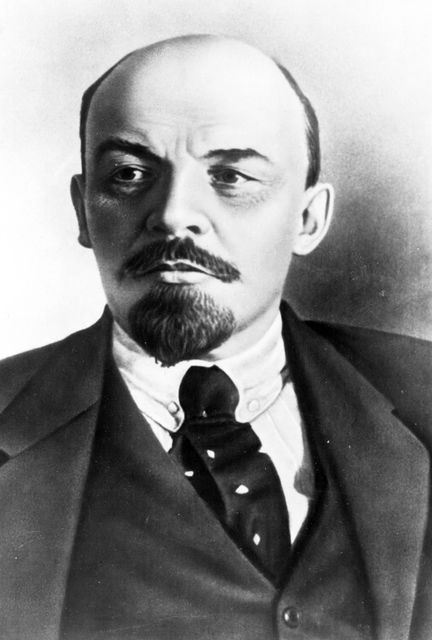 Lenin writes from Switzerland against “social patriotism.” “It befits the bourgeois to try to instill in the people, in the exploited, faith in the bourgeoisie of his own country and use plausible phrases to conceal the realities of its imperialist policies.

Something quite different, however, is expected of the socialist, namely: merciless exposure that leaves no room for illusions about the real policies of his “own” bourgeoisie.” (Excerpts from “Defense of Neutrality,” written in January, 1917, on Swiss “armed neutrality”)

London, February 24, 1917: Zimmermann Telegram draws US to brink of war 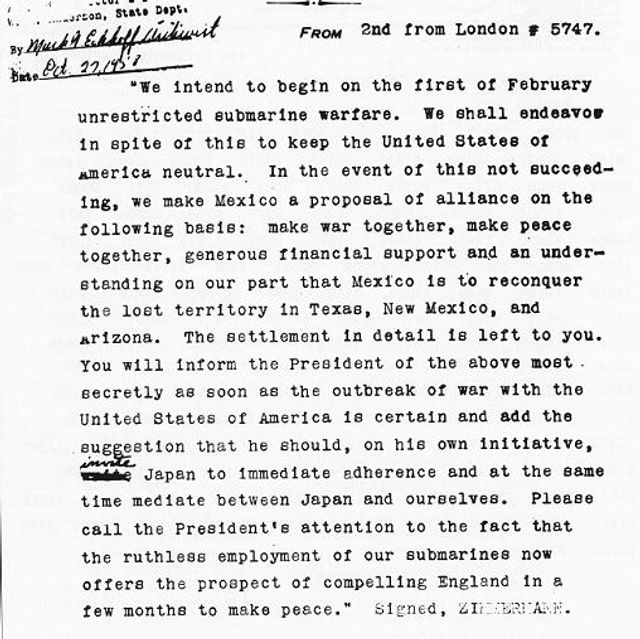 Walter Hines Page, United States ambassador to the United Kingdom, is shown the intercepted and decoded Zimmermann Telegram, in which Germany attempts to draw Mexico into the war against the US—then officially neutral but increasingly in alliance with the UK and France—in exchange for a promise to return the American southwest.

The telegram from Foreign Secretary Arthur Zimmermann explains that on February 1, Germany intends to launch unrestricted submarine warfare to choke off the British war machine from its supplies in the US. American neutrality is now a fiction, with the Wilson administration moving openly toward the Allies, which it has funded and armed.

It is Berlin’s hope, Zimmermann writes, to still maintain US neutrality. But if this fails, he invites a military alliance with Mexico, to be funded by Germany. Mexico, which has only recently seen the withdrawal of US troops under General John Pershing pursuing revolutionary Pancho Villa, would reclaim a large portion of the territory lost in the Mexican-American War of 1846-1848. The telegram hints at the possibility of an alliance also with Japan. 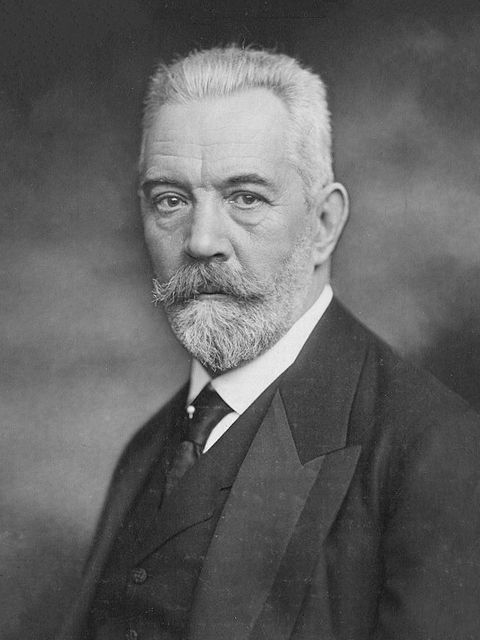 In Germany, leading industrialists call for the resignation Chancellor Theobald von Bethmann Hollweg, whom they accuse of being incapable of leading the war.

The petition is an expression of growing opposition in the military and bourgeoisie to Hollweg, who, in an attempt to avoid all-out war with the United States, has come into increasing conflict with the German military high command and sections of the bourgeoisie over submarine warfare. In early February 1917, Germany had declared all-out submarine warfare on the United States, a step long opposed by Hollweg. The conflicts also concern the degree to which the government should make concessions to the increasingly war-tired and hunger-ridden German population.

The New York Times reports increasing hunger riots and strikes in three major industrial cities of Germany: Berlin, Dortmund and Hamburg. A source of the Times reports that in Hamburg, “hundreds of workmen in the big shipyards and ammunition factories are falling ill from underfeeding.” In Dortmund, hungry crowds have sacked shops. In Berlin, some 8,000 workers of the AEG demand higher wages. A few days earlier, strikes by miners and metalworkers rocked the Ruhrgebiet, the most important industrial region in Germany.

The New York Times reporter writes that the situation “is in the deepest sense of the word desperate.” In the winter of 1916/17, the average food ration allocated by the government to German workers covers only 50 percent of the required daily calorie intake. 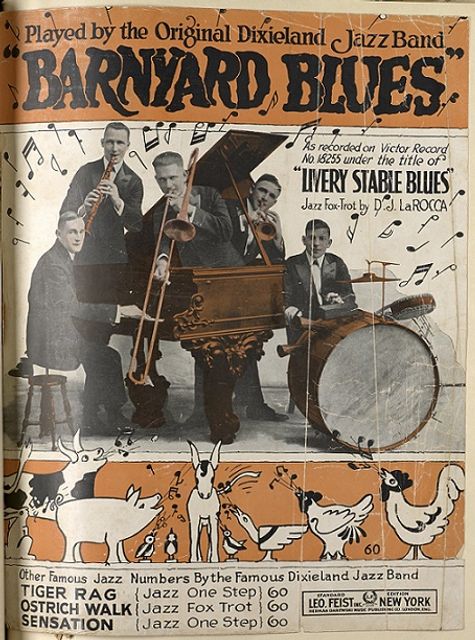 The song “Livery Stable Blues” is recorded by the “Original Dixieland Jass Band” by the Victor Talking Machine Company in New York City. The song is a sensation, selling upwards of 1 million copies and creating an immense demand for jazz musicians in New York and Chicago. It is performed by a group of New Orleans jazz musicians: Nick LaRocca, on cornet, Eddie Edwards on trombone; Larry Shields on clarinet; Henry Ragas on piano; and Tony Spargo on drums. A competing version of the song is released by another pair of New Orleans jazz musicians, Ray Lopez and Alcide Nunez.