“1700 Years to Build; 5550 Miles Long; What Were They Trying to Keep Out?” reads the tagline for Chinese filmmaker Zhang Yimou’s The Great Wall. That seems to capture some of the essential vacuousness of the project. 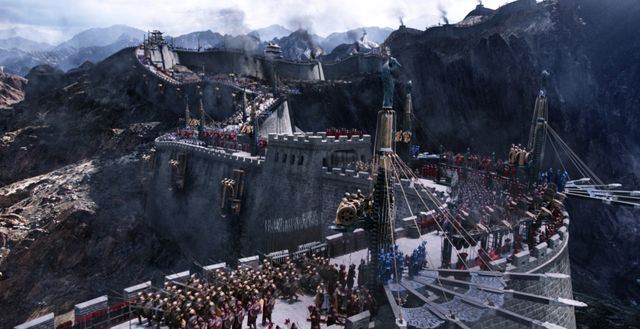 Zhang’s The Great Wall is the critically acclaimed director’s first English-language production. It is a visually arresting, large-scale action film that, unfortunately, does not transcend the fairly primitive boundaries of the genre.

Set in the era of China’s Song dynasty (960-1279), the film opens with a group of European mercenaries crossing the Gobi Desert in search of a new type of weapon called “black powder” (i.e., gunpowder, whose first confirmed use occurred in China in the 800s). Set upon by Khitan nomads and then attacked by a mysterious creature, the original group of 20 is reduced to William Garin (Matt Damon) and Pero Tovar (Pedro Pascal).

Stumbling upon the Great Wall, they are taken prisoner by the Nameless Order, an elite army regiment led by General Shao (Zhang Hanyu) and the young female Commander Lin (Jing Tian). The battalion comprises five corps named after the crane, bear, eagle, deer and tiger. Its disciplined fighters (males in red, females in blue) are in the throes of their preparation for a life-and-death showdown with a monstrous enemy, the Tao Tei—giant bearded dragon-like aliens. They “rise every 60 years to feed upon humanity and punish mankind’s greed,” and they are intent not only on conquering China, but the entire world.

At first, William and Tovar appear as mere backward ruffians to their polished, well-trained and well-equipped captors until the Tao Tei launch an attack, and the European duo (Damon’s Irish accent is questionable) prove their worth as valiant fighters. William (an expert archer) observes that previously “I fought for greed … this is the first war I’ve seen worth fighting for.”

Tovar disagrees and wants to proceed with their plan to escape with enough of the black powder to make them rich. They will be joined by Ballard (Willem Dafoe), another European and seeker of gunpowder, who was taken prisoner 25 years earlier. Predictably, only the pure of heart and mind can repulse the invaders and rebalance the universe. 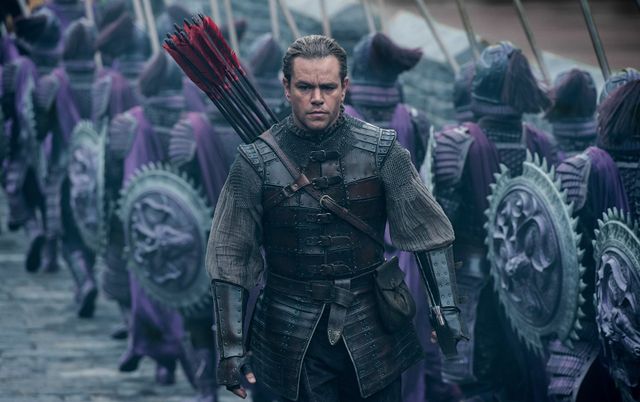 The Great Wall is an extravagant work whose spectacular features include the serpentine Wall itself; the atmospheric mountain/desert landscape; a drum corps that performs with frightening precision; masterfully choreographed battle scenes; and vibrant costumes and set pieces, such as a brigade of hot-air balloons dotting a sizzling sky. Enhancing the overall lavishness is an impressive score composed by Ramin Djawadi.

Sadly, the film’s fiery energy is undermined by the general cartoonishness and emptiness of the script and the characters—even making allowances for the computer-generated monsters. Despite Zhang’s unmistakable flair for sweeping dramatic movement and tension (appropriate perhaps in China), it is difficult for the viewer to become emotionally aroused by and engaged with a world reduced to the nearly one-dimensional.

The script involved the collaboration of six writers, including two at least who have done interesting work in the past: Edward Zwick, director of the Civil War epic Glory (1989), and Tony Gilroy, who directed Michael Clayton (2007), a politically charged exposé of the chemical industry. The results of their collective efforts are very weak here.

Zhang (born 1951) is one of the most gifted and sensitive living directors. His best films, in an exceptional and versatile career, include Red Sorghum (1987), Ju Dou (1990), Raise the Red Lantern (1991), The Story of Qiu Ju (1992), Not One Less (1999), and Coming Home (2014). His early films in particular reflected strong sympathy for the oppressed and a disdain for those in power. A number of his initial films were banned in China, although they were shown outside the country.

Of Raise the Red Lantern, we wrote in the Bulletin in 1992: “Set in the 1920s, the film nevertheless indelibly points to contemporary life. It depicts social and personal relationships which are so inhuman and crushing that they demand a social revolution. Whatever Zhang’s political outlook, his artistry is serious and critical enough to disturb any regime, particularly one bent on resurrecting the conditions of exploitation that Raise the Red Lantern examines.”

So why is Zhang making trivia like The Great Wall?

The answer lies in the complicated and interrelated problems of contemporary filmmaking and the specific political and cultural contradictions of Chinese society. The Beijing regime for its part has learned to operate in the artistic sphere with a little more finesse, balancing repression and rewards. Most of the so-called Fifth and Sixth Generation filmmakers have accommodated themselves to the regime. There is less obvious opposition and social criticism in current Chinese cinema today than there was two decades ago. No doubt a great deal of it has been pushed “underground.”

Zhang has strong feelings and a great cinematic-dramatic eye. However, in the long run, even such attributes are no substitute for a perspective on history and society. Like all the Chinese artists, cut off from a left-wing critique of Maoism-Stalinism, Zhang is largely clueless when it comes to the character of the Chinese Revolution and the evolution of Chinese society, including its re-entry into the global capitalist system. He gives the appearance of a frustrated, energetic figure largely running in place. Thus, The Great Wall.

On the whole, reviewers in the US have received Zhang’s new work coolly. The film certainly deserves to be criticized, and the reception would be entirely understandable were it not for the fact that numerous Hollywood superhero movies received a far more positive reception in 2016.

Indeed, despite the fundamental conventionality of Zhang’s film, a major Chinese-made film appearing in American movie theaters is bound to create noxious ripples. 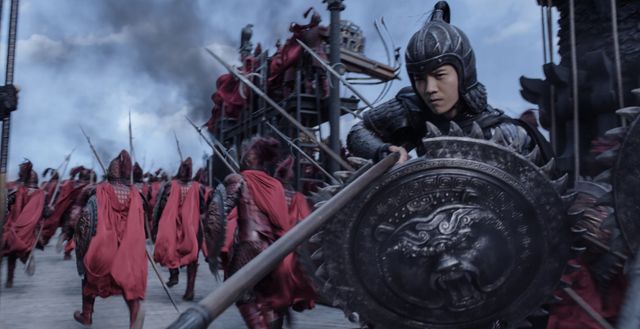 The hostility or sensitivity takes different forms. The practitioners of identity politics jumped on The Great Wall, before it came out, as another “white savior” film, because of Damon’s role. The Atlantic in August 2016, for instance, wrote stupidly that Zhang’s film was “now the most dramatic example of whitewashing: Though it’s rooted in Chinese history and culture, and is made by a Chinese director and studio, the film is already relying solely on the face of a well-known white American actor to sell its story.” The magazine took Damon to task for being “the face of a film that embodies all of the industry’s worst tendencies, by yet again putting a white American actor at the center of another culture’s story.”

In response, Zhang defended his film: “Matt Damon is not playing a role that was originally conceived for a Chinese actor. The arrival of his character in our story is an important plot point. There are five major heroes in our story and he is one of them—the other four are all Chinese. The collective struggle and sacrifice of these heroes are the emotional heart of our film. As the director of over 20 Chinese language films and the Beijing Olympics, I have not and will not cast a film in a way that was untrue to my artistic vision. I hope when everyone sees the film and is armed with the facts they will agree.”

Although there was some pulling back (including by the Atlantic) from the “whitewashing” argument following Zhang’s comments and the release of the film, this still did not prevent the Chicago Tribune reviewer, for example, from asserting that The Great Wall was, among other things, “a white savior movie” and a Chinese-American comic from generating the sarcastic hashtag #ThankYouMattDamon, as in “Thank You Matt Damon for all that you’ve done to save the Chinese people.” The identity politics well is as apparently bottomless as it is dry.

On the other hand, subtle or not-so-subtle anti-Chinese sentiment came from sources such as Ann Hornaday in the Washington Post. Hornaday observed February 16 (“‘The Great Wall,’ Matt Damon and Hollywood’s delicate dance with China”) that Zhang’s film was “arriving in American theaters at a point when U.S.-China relations could scarcely be more consequential.” The article suggested that while Hollywood studios were very much interested in earning profits in China’s “movie-hungry market,” the American film industry’s “attempts to cater to the Chinese market can veer toward pandering.”

Hornaday complained that “films dealing with such subjects as homosexuality, a free press and democratic dissent—think Brokeback Mountain, Spotlight and Selma—never make it past square one with Chinese censors.”

The Chinese regime is a thuggish defender of big business. That the American film industry, however, is entirely under the thumb of a handful of conglomerates and “panders” to Wall Street, the Pentagon and the CIA in the overwhelming majority of its products does not trouble Hornaday one bit. Raising the issue of “human rights” in China in the Washington Post, one of the principal proponents of imperialist invasion and neo-colonial war, is a fraud.

In her review of the film published the same day (“‘The Great Wall’ isn’t that great after all”), Hornaday once again expressed sensitivity about China’s current global role. She noted that “early criticism for casting Damon as what many presumed would be the usual ‘white savior’” had turned out to be misguided. Her concerns lie elsewhere, above all, with China’s growing influence. The Post critic noted that Damon’s character was “less an out-and-out hero than a foil for ideas of national identity and cultural chauvinism that China is obviously eager to export for global consumption.”

All that being said, unhappily, Zhang’s new film is a poor one.