The latest research on rising mortality rates by Princeton University economists Anne Case and Angus Deaton, presented this week at the Brookings Institution, shines new light on the depth of the social crisis which has devastated the American working class since the year 2000.

Building off their initial 2015 study which documented a sharp rise in the mortality rate for white, middle-aged working-class Americans, Case and Deaton conclude that the rising death rate is being driven by what they define as “deaths of despair,” those due to drug overdoses, complications from alcohol and suicide. The mortality rate for these causes grew by half a percent annually between 1999 and 2013.

During the course of the 20th century, the annual mortality rate for all middle-aged whites fell from 1,400 per 100,000 to 400 per 100,000. The US experienced a 100-year period of almost uninterrupted improvements in death rates and life expectancy. In this context Case and Deaton identify the recent rise in middle-aged mortality as “extraordinary and unanticipated.” 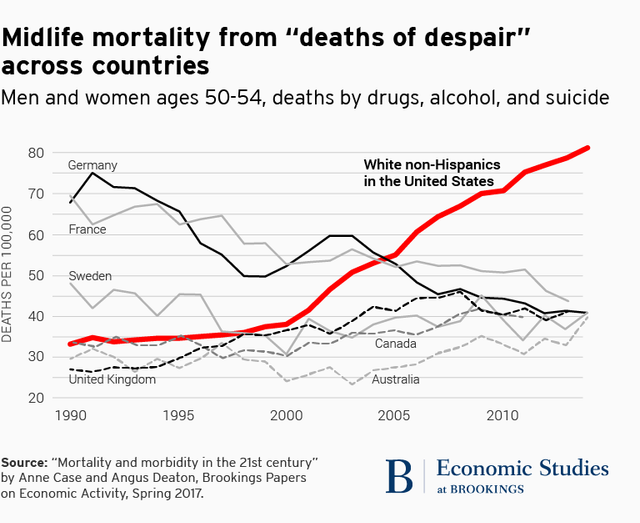 Midlife deaths of despair across countries

The epidemic of deaths from drugs, alcohol and suicide was initially seen in the American Southwest in the year 2000 but soon spread to the Appalachian region and Florida and is now nationwide, affecting rural and urban areas alike.

While every region of the US has seen an increase in the rate of “deaths of despair” among middle-aged whites over the last 15 years, the hardest-hit states are in the South (Alabama, Kentucky, Tennessee and Mississippi). Large urban and suburban areas have been the least affected, rural areas the most.

Case and Deaton’s report is supported by the most recent Centers for Disease Control (CDC) data concerning suicides and overdoses.

The CDC found that after declining between 1986 and 1999 the US suicide rate rose gradually between 2000 and 2015, with the rate growing most rapidly in smaller cities and rural areas after the 2007-2008 economic collapse. Whites and Native Americans had the highest suicide rates, with both groups seeing noticeable increases. All told there were 600,000 suicides in the US between 1999 and 2015—the equivalent of the loss of a major city, more than the total estimated deaths in the Syrian civil war. 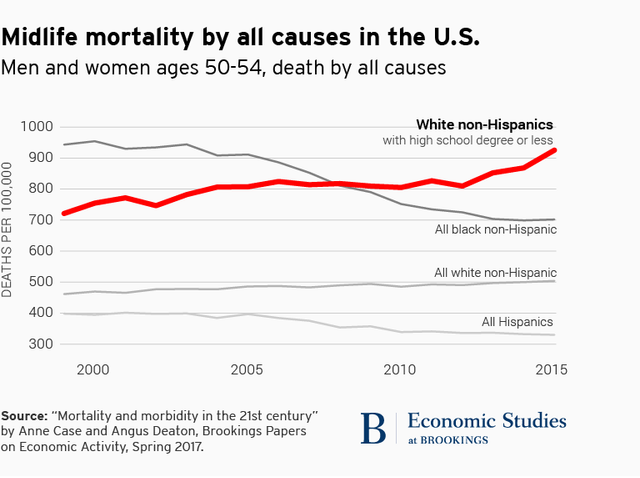 Midlife mortality by all causes in the US

The data collected and analyzed by Case and Deaton reflects a deeply sick society, the outcome of a social counterrevolution which has accelerated since the 2008 crash.

Their research makes clear that the American working class, regardless of race, is being made to pay the price for the failure of capitalism, exposing the lie repeated by pseudo-left groups and the practitioners of identity politics about the “privileged white working class.”

In the period reviewed by Case and Deaton, the Democratic Party completed its repudiation of a political program which in any way addressed the needs or interests of the working class, in favor of middle-class identity politics. This found its culmination in the election of Barack Obama, the first black president, who funneled trillions of dollars into Wall Street and expanded the wars in the Middle East. In the last year of his presidency, which had seen such catastrophes as the lead poisoning of Flint and the BP oil spill, and seven years of wage stagnation, Obama asserted that things were “pretty darn great” in America.

The immiseration of the American working class has also been made possible by betrayals of the trade unions which over the last four decades have collaborated with and integrated themselves ever more closely with the corporations in order to shutter factories, eliminate jobs and enforce wage and benefit cuts.

The period in which the American working class has been subjected to unrelenting attacks has seen the growth of historically unprecedented levels of social inequality. The resources of society and the wealth created by the working class have been plundered and funneled into the hands of an ever wealthier financial aristocracy. This process will only accelerate under Trump.

While it is claimed there is “no money” to pay for decent wages or social services in the US, the country claims eight of the world’s 10 wealthiest billionaires and spends more than the next seven countries combined on its military. The health care overhaul and budget cuts being proposed by the Trump administration are guaranteed to accelerate the social counterrevolution.

In this regard it is striking to note the overlap between the areas of the country particularly devastated by “deaths of despair” in the period examined by Case and Deaton and those with a large vote for Donald Trump in the 2016 election. The anti-working class policies pursued in the Obama years paved the way for Trump.

The residents of these areas, either rural or devastated by years of factory closures, voted for Trump not out of racial animus—an assertion often made by the mainstream media and pseudo-left—but as a cry of desperation, incipient anger and complete disgust with the political establishment.

These people have been at the frontlines of the onslaught against the working class, facilitated by Democrats and Republicans alike. As far as Trump identified himself as an outsider, opposed to the political establishment which facilitated the plunder of the working class, he drew significant support. These same working people are quickly being disabused of any illusions they may have held in the billionaire businessman.

The fundamental question raised by Case and Deaton’s research is the struggle of the working class against the capitalist system and for socialism. Social inequality has never been higher and the rich have never been richer. The working class is the only force which can reverse this counterrevolution. Workers must turn to socialism and fight to build a mass independent movement which will fight for political power and take control of the wealth plundered from them, putting it to use for the common good.