More than 1.5 million Michigan households—40 percent of the state’s population—do not have incomes that cover basic necessities, according to the United Way charity’s ALICE report released in mid-April this year.

Using income data from the US Census bureau from 2015, the ALICE report reveals that a substantial percentage of families with incomes above the official Federal Poverty Level (FPL) are unable to afford such basics as housing, child care, food, health care and transportation. The 40 percent ALICE Report figure is made up of the 15 percent of households below FPL and the 25 percent of the population who make more but don’t make enough. 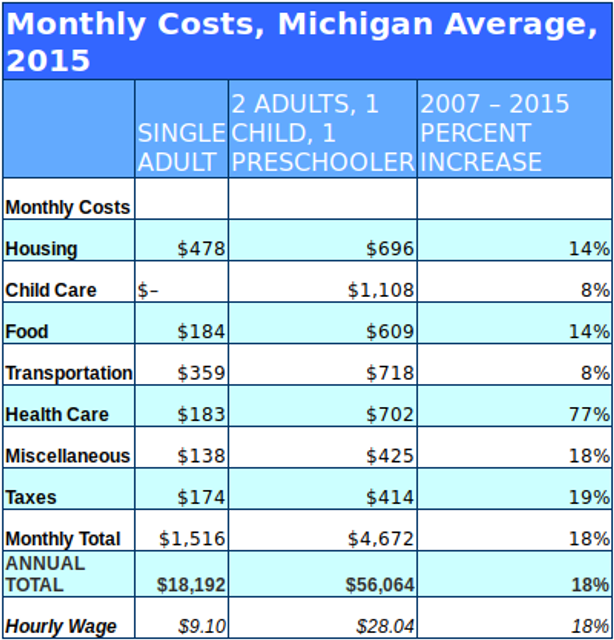 The ALICE acronym stands for Asset Limited, Income Constrained, Employed. The percentage of Michigan families with incomes below the barebones Household Survival Budget increased from 38 percent to 40 percent of the total state population from 2007 to 2015.

That the number and percentage of families still struggling has actually increased is significant, as the Michigan official unemployment rate has dipped from almost 15 percent in the earlier part of the decade to 5.3 percent today.

The report cites two major reasons for the persistence of household economic distress.

In the first place, the basic cost of household expenses has increased in every county in Michigan by 18 percent since 2007. This is higher than the national inflation price rise of 14 percent during the same period.

While household costs climbed, low wage jobs are now the largest category of jobs in Michigan, with 62 percent of all jobs in the state paying out less than $20 an hour. Two thirds of those jobs actually pay less than $15.

The report notes one of the biggest challenges for Michigan families is child care, which represents nearly a quarter of the monthly Household Survival Budget for a family of four. Even so, that budget allows for only home-based child care, which is the cheapest alternative available.

It is also far above the annual wage for a family with two adults working full-time year-round at minimum wage.

One indication of the inadequacy of the ALICE budget is that its health care cost is based on the penalty for not buying health care under Obamacare, and not on the actual cost of health care. Not even the high-deductible Bronze plan is affordable for most.

The authors of the report are well aware of its inadequacies. They calculate a more-generous “Household Stability Budget,” one that includes allotments for basics like paying premiums for employer-based health care or owning a cell phone. Only 9 percent of the population makes an hourly wage of $40 to $60 an hour needed to approach such a budget.

The authors also seek to dispel some myths about who is struggling paycheck-to-paycheck. Single female-headed families only account for 18 percent of all working-age households below the ALICE threshold, according to the report.

The level of distress facing workers in Detroit was evident over the recent holiday weekend, when a local church offered $10,000 in free gasoline to the first people in line. Hundreds lined up for the free gas, limited to $20 per individual, some arriving as early as 4 a.m. One of the volunteers from the church, Donte, spoke to WSWS reporters and explained that many taking up the church’s offer were in serious distress. 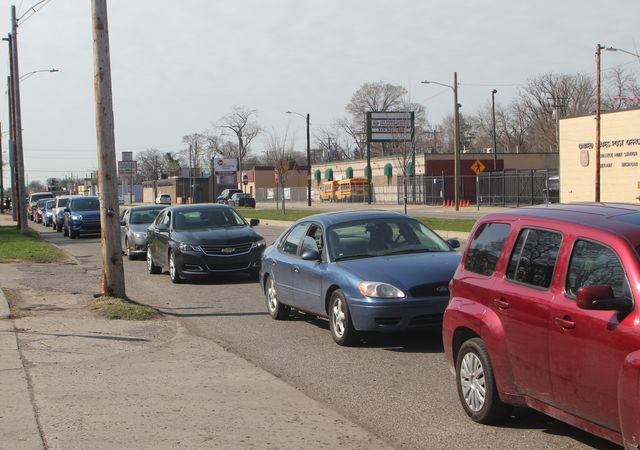 “We have done this before, and I have spoken in the past to people who really needed it. They could not get to work or to doctor’s appointments.

“I heard of people today who spent $7 in gas to get the $20 to fill their tank and it was worth it to them, that’s how urgent it was. One guy said he woke up with nothing left in his checking account. Another family ran out of gas a mile away and our people decided to take the gas to them. They were not going to let them have to be towed. Actually, quite a few have run out of gas just getting here.” 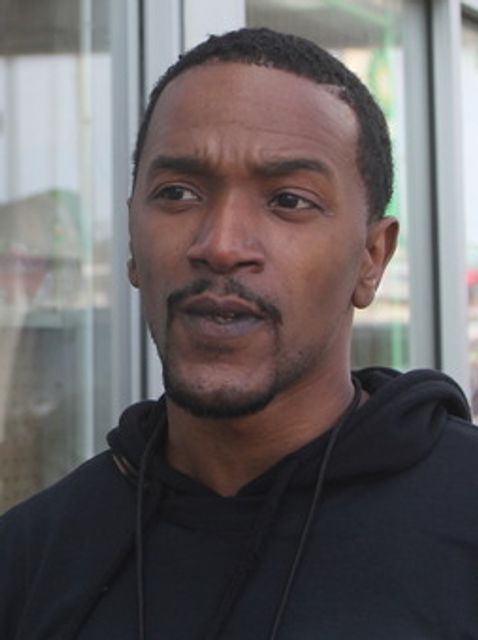 Donte expressed surprise that the number of families not making enough to survive in Michigan was calculated at 40 percent in the United Way report. “That seems like a big number to me, I am surprised it is that much. You see the church people coming all dressed up, but you don’t always know how vulnerable they are, because you don’t see all the things they are going through.”

WSWS reporters also spoke to Darlene and Dion, a young couple waiting in the lineup of cars, on the ALICE report. Darlene said, “We came today for the free gas because we need it to get to work. We are on ‘E’ right now. We just paid the rent and it was $800, and now we do not have any gas left to get to work.

“We both work, and can hardly make it.” Referring to Dion, who was driving the van, she explained, “He does factory jobs through a temp service, and I work in fast food. He makes about 10 dollars an hour, and I make 12 at McDonald’s. It isn’t enough. We have four children, a seven-year-old and an eight-year-old, and then there are the twins.

Dion noted, “Often I work six days a week doing assembly of medical equipment and things like that, working for a temp agency. But the kids are constantly growing, and we are struggling just to have the money for basic things like clothing. They need clothes, shoes, all the time.”

The couple commented on the relentless expenditures they have to deal with. “We have to spend about $1,000 a month just on food for all of us. We have four children to feed.”

Compared to the massive need, all that private charities can contribute is a drop in the bucket. The United Way report calculates $7 billion in additional wages or public resources would be required for all Michigan households to have what amounts to a barely adequate income. By way of comparison, the federal government spends more than $500 billion annually on the military and the Trump administration is proposing to increase that by more than $54 billion through dollar-for-dollar cuts in social programs that provide assistance for housing, child care, food, health care and transportation.