“The politicians in Flint, Lansing and Washington—they’re all for capitalism”

The poisoning of the city of Flint continues three long years after the decision was made by politicians and financial speculators to switch city residents to Flint River water. On April 25, 2014 Mayor Dayne Walling and emergency manager Darnell Earley closed the valve on the Detroit water system, calling it a “return to our roots.”

As the world now knows, the corrosive Flint River water leached lead from the antiquated piping system into the homes of residents. Lead is the most deadly neurotoxin known to man.

Because next to nothing has yet been done to fix the city’s infrastructure, even after the switch back to Detroit water, there is no safe water supply for thousands of residents.

As of now, only $187 million has been earmarked by the state and federal government combined to fix the pipes, far below the actual amount needed according to many estimates. A lawsuit brought against the state was settled in late March, outlining an entirely inadequate program of replacing 18,000 lead service lines in the city by the end of 2020—just 6,000 each year.

In February, the state government declared that Flint’s water was drinkable and that it would end subsidizing the costs of water for residents. It also announced that the provision of bottled water would end in June based on the Environmental Protection Agencies (EPA) evaluation of Flint’s water. The federal agency, which was complicit in covering up for the lead in Flint’s water and which silenced a leading investigator for speaking out about the lead in Flint’s water, has determined that the city’s water has fallen below the 15 parts per billion (ppb) action level set in the EPA’s Lead and Copper Rule (LCR). 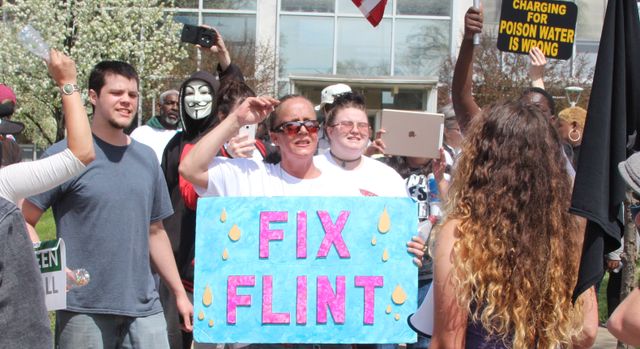 It is well known that the LCR levels are out of date and that the Centers for Disease Control and Prevention (CDC) has determined that there is no safe level of exposure to lead. In addition, Virginia Tech’s Dr. Marc Edwards, who led the team that exposed the lies of state water authorities that Flint water was safe to drink, are still warning residents that the water is unsafe without filters.

Beginning in March, city residents started to be billed for water that is still unsafe. There is widespread, justifiable mistrust of the government regarding the water to this day.

“In the last three years, I have watched and gotten sicker. I have a jug of water, which was the second one I pulled from my tap in 2014 after the city switched to the Flint River. The water ate that old jug out. I went down to the basement and found that the bottom was completely eaten out.”

“It’s difficult,” stated Gladyes. “On any given day you can come to my house and I have six cases of water stacked in my kitchen. And now they are saying they are going to cut people off the bottled water in June. It’s just outrageous.

“When they talk about cutting off bottled water, they are trying to force us to drink this water with a filter. I won’t be doing that. I’m not going to use it. I will never drink the Flint water again. I don’t care how many filters you pour this water through.

“The minute they start digging out more the pipes, they are going to stir this water and sediments back up into the water system and it’s going to come even more into people’s sinks.”

Referencing the 12 people who died from Legionnaires’ disease as a result of the switch in water source, Gladyes stated, “It’s already 70 degrees here today, by July, August you want to talk about bacteria? You watch the spike in bacteria, airborne, peoples’ lungs, pneumonia. Look at the cases coming in.”

Gladyes’s concerns were echoed in a report by the online Brigemagazine that reported the number of pneumonia-related deaths doubled in Genesee County, where Flint is located, during the years the city was using the Flint River for drinking water. 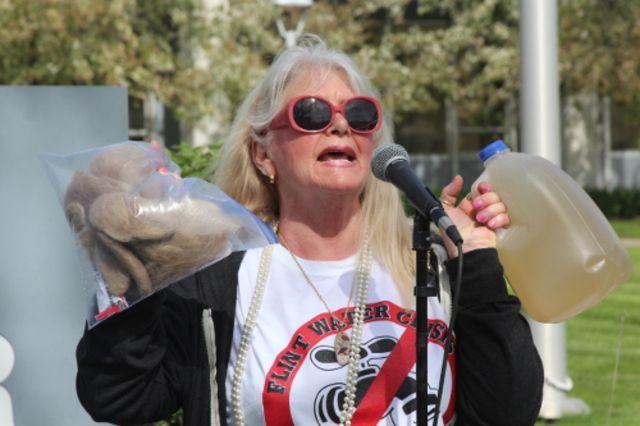 While the official count is that 12 people died, Genesee County Health and Human Services said that 87 people died of pneumonia in 2015 and 90 in 2014. This was a dramatic increase from 53 deaths in 2013. Legionnaires’ is a respiratory disease caused by the Legionella bacteria. Medical experts told Bridge there is no way to know how many cases were Legionnaires’ disease because county and state officials did not order testing on those patients.

“Florissa [a friend who lives in Flint] needs to go into her house and get her family pictures, but she cannot even go into the house because it’s so bad with airborne bacteria. It’s a rare strain of bacteria that Florissa is affected by and it is very deadly. That’s how bad this water is. Her home has been declared an environmental zoning area. It’s not considered residential anymore. It’s been rezoned. They didn’t even put up the information. Look it up. The way they have it now no home should be in Flint.

“My home is now worth nothing. Where would I go with a $25,000 income. I’m not going into a gutter. It’s not enough to move. I’ve jumped out of the class action lawsuit and retained my own attorney. I took the appraisal for $22,000 on my home to my attorney. I added it onto my lawsuit.

Flint was the birthplace, nearly 100 years ago, of General Motors, and the source of billions of dollars of corporate profits over generations. Dubbed “Vehicle City,” it was also the birthplace of the United Auto Workers in the famous sit-down strikes of 1936–37. By 1960 it boasted the high per capita income in the US.

Over the last 35 years the city has been devastated by plant closures, aided and abetted by the UAW. GM has reduced employment in the city from 80,000 to 5,500. It has shut down and flattened the sit-down plant “Chevy in the Hole” as well as Buick City, which alone once employed 28,000 workers. Exacting huge tax cuts and polluting the Flint River with impunity, GM has left its birthplace in ruins.

While GM—which was bailed out in 2009—handed over tens of billions to wealthy investors in the form of dividend payments and stock buybacks. Meanwhile Flint city officials said they did not have $80 to $100 a day to treat the water supply with phosphates that would have coated the pipes and prevented the escape of lead and copper into the water supply.

“GM pulled out of Flint and left us out to dry,” said Gladyes. “What they’ve done to Flint—between bad government and an aging pipe system that got flushed with the Flint River—they’ve eradicated who knows how many generations. Will we ever know how bad it really is?

“I watched this for three years. What have we gained? Lansing, the city of Flint, the United Way, the Red Cross, the Mott Foundation—foundations have sprung up here in Flint and they have gotten rich. They’ve gotten all kinds of money.” 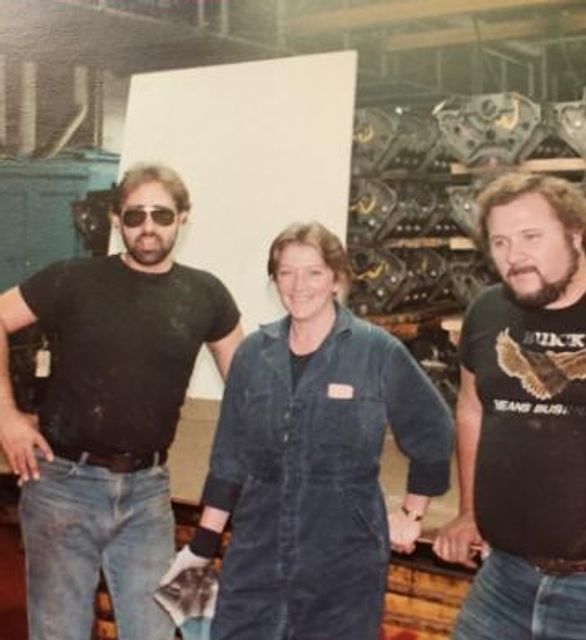 In 2014, Gladyes, along with Lee Ann Walter, Melissa Mays and Tony Palladeno, Jr. challenged the Flint Emergency Manger, the mayor at that time, Democratic Dayne Walling—and state and local officials on the toxic nature of the water. After Walling went on television to tell Flint citizens to drink the water, Gladyes said she decided to back Karen Weaver, a local psychologist, who decided to challenge Walling’s bid for re-election.

“I’m not surprised there are three recalls against Weaver,” stated Gladyes now thoroughly disgusted with Weaver. “Are you surprised? I will not entertain this any more. I believed in her. I stood over at the elementary school and told people don’t vote for Walling, he was the yes-man. Mayor Weaver can give Gilchrist [consultant Aonie Gilcreast] $140,000 in retroactive pay without putting it through city council. She went around the council and took it out of water funds—water funds! Now I’m sitting here with a copper water service line that will never get replaced. But she can dole out money to a ‘volunteer’ that helped her get into office and cradled her.”

“What has Weaver done? She has cost the taxpayers of Flint with a garbage company that was under indictment, Rizzo. Woodrow Stanley [the former mayor of Flint who was later hired by Rizzo] got $100,000 in consultant fees from Rizzo. Weaver was in on that. She stood right behind Rizzo, knowing they were under federal indictment and there was all kinds of shady things going on.

“In three years I’ve learned a lot. The event at the church where six people were arrested was a setup. Weaver decided to have a town hall meeting, which is supposed to be for all religions, races, gender identification at a church. That venue was a setup. And look at the rally today. I didn’t see anybody from the House of Prayer [where the town hall meeting and arrests took place] there.

The use of race to divide the working class

Gladyes was especially angry about the recent report by the Michigan Civil Rights Commission, which charged that the cause of the water crisis in Flint was “racism.”

“I hate the use of the race card,” stated Gladyes emphatically. “If they can divide the working class, they can win. Snyder brought the Civil Rights Commission in here. They wore suits, got travel expenses, but what did Flint get? Nothing, only more division.”

“Listen, white and black water faucets went out (of use) in the 1960s. When they say this is about color, no it isn’t. Those who say that are not looking, they’re blinking, they’re not seeing. This is not about color, it’s about harnessing and dividing a group a people. When you make them fight each other, then capitalism can just move right along and keep taking, taking and taking.” Flint residents appealing to Obama who visited Flint in May 2016

Gladyes noted that Clinton and Sanders promoted race during the Democratic primaries when they came to Flint to debate in 2016. At one point, Gladyes said, she was a supporter of Sanders who claimed to be a socialist. At the same time, many people in Flint believed in Obama because he was African American and they thought he would come to the aid of the people suffering from toxic poisons.

“Above all, I’ve been able to see what true socialism is, especially after listening to the historical lectures about the Russian Revolution on the WSWS.

“The Democratic or Republican parties—none of them—are going to save us. I’m not buying it. They may have people fooled, but they haven’t got this girl fooled.”