Laura Poitras’ new documentary, Risk, about WikiLeaks founder Julian Assange, opened in the US May 5. Shot over six years, beginning in 2011, the film treats events during the period in which Assange was under house arrest (December 2010-June 2012) in England and, subsequently, forced to take refuge in the Ecuadorian embassy in London (June 2012 to the present).

Those dramatic events include the release of various document sets by WikiLeaks, the arrest and sentencing of US army soldier Bradley (now Chelsea) Manning, the revelations and flight of NSA whistleblower Edward Snowden, and the attempted frame-up of Assange by Swedish authorities on allegations of sexual misconduct. Assange was under house arrest in 2010-12 because of those allegations and later sought asylum from the Ecuadorian government to avoid extradition to Sweden, whose government would very likely have shipped him off to face life in prison or death at the hands of the US military and legal system.

Other episodes in Risk include a scene of Assange and his WikiLeaks collaborator, Sarah Harrison (who escorted Snowden to Russia in 2013 and is now unable to return to Britain), attempting to reach US Secretary of State Hillary Clinton in 2011 to warn the US government that the passphrase protecting a file of 250,000 classified cable messages has been made public and all the documents are about to be released online unredacted. 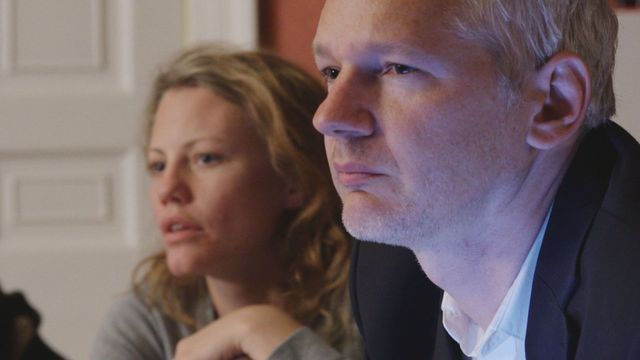 Much of the documentary takes place in the cramped confines of the Ecuadorian embassy. When pop singer Lady Gaga comes to visit in 2012, she expresses astonishment at the Spartan living conditions. Daniel Ellsberg, of Pentagon Papers fame, makes a brief appearance. We are also witness, rather remarkably, to Assange’s disguising himself after he loses his appeal against extradition to Sweden in the UK Supreme Court, and preparing to enter the embassy. Risk takes in as well the 2016 election campaign, WikiLeaks’ release of internal Democratic Party communications, and the subsequent claims that the Russian government used Assange’s organization as a means of influencing the election outcome.

Almost in an aside, we also briefly follow Jacob Appelbaum, journalist, computer security researcher and WikiLeaks representative on occasion. Appelbaum, associated with the TOR Project, has also faced unsubstantiated allegations of sexual misconduct.

In general, Risk, while it contains interesting and even quite explosive material, suffers severely from Poitras’ disjointed and superficial treatment. The film broaches a dozen subjects and avoids treating any of them in depth, and often fails to take a clear position of any kind. In fact, even though Poitras in interviews expresses general admiration for the work of WikiLeaks, her documentary cannot rouse itself to offer a principled defense of Assange, the target of an internationally coordinated witch hunt by governments and intelligence agencies.

Frankly, neither of the first two parts of Poitras’ so-called “9/11 trilogy” made a favorable impression either. My Country, My Country (2006), a portrait of a Sunni medical doctor in Baghdad, we noted, “makes relatively little of the devastating impact of the American occupation” of Iraq. “The director’s attitude toward the colonial-style occupation is never made clear… All in all, the films seems muddy and weak.”

In regard to The Oath (2010), the WSWS commented that the film was “markedly devoid of any historical context,” and in the absence of such, “could conceivably be viewed as a defense of the ‘war on terrorism,’ albeit shorn of its excesses: torture, illegal detentions and show trials.” Her CitizenFour (2014), about Snowden, was a more clear-cut and creditable work.

One of the sharpest expressions of Risk’s difficulties is the fact that Poitras made significant changes in the film over the past year (since a screening at the 2016 Cannes film festival). According to various accounts, it was “a much more straightforward, positive portrayal of WikiLeaks and Assange,” an “activist documentary” that made “an overwhelming case for Assange as a political prisoner.” 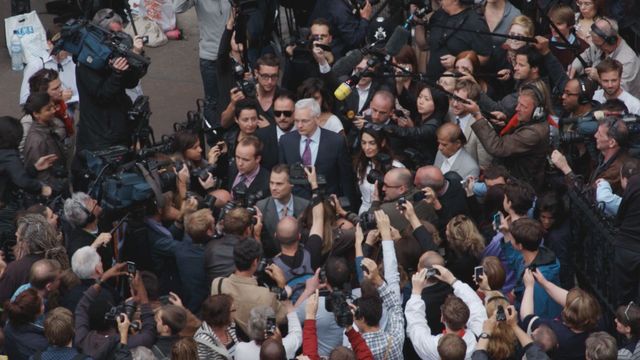 But this was prior to the exposure of the Democratic Party’s corrupt inner workings by WikiLeaks and claims that the Russians were involved, supposedly to aid Donald Trump. As Slate notes, “Subsequently, Poitras spent months revising her film for release this Friday.”

These facts alone should alert the reader to much of what he or she needs to know. Poitras has accommodated herself in part to the hysteria, driven by the Democratic Party hierarchy, over alleged Russian interference in the US elections.

That would be bad enough, but in addition and connected to that, the filmmaker has essentially bowed to the pressure of the incessant and reactionary claims that Assange is a “sexual predator.” Those claims, not to mince words, have been voiced by a noxious alliance of feminists, pseudo-leftists, establishment media figures, right-wing tabloid scum and various mouthpieces, acknowledged or unacknowledged, for the US State Department and CIA.

In her “Director’s Statement,” explaining the alterations she made to Risk, Poitras writes, “Events unfolded before and after the Cannes screening that obligated me to continue working on the film. These included legal and personal pressure and demands by Assange and his legal team to remove scenes in the film in which he speaks about the ongoing sexual offences investigation in Sweden, and new sexual misconduct allegations made against another person in the film [i.e., Appelbaum].”

The principal scene in the film in which those allegations arise involves a conversation between Assange and one of his lawyers, Helena Kennedy, a Labour peer. Kennedy advises him to tread lightly in regard to his two Swedish accusers. Quite correctly, Assange rejects this approach, arguing that the legal attack comes from the “[Swedish] social democratic party plus general influence from the government. It’s just a thoroughly tawdry, radical, feminist political positioning thing. It’s some stereotype.” (The latter comment has truly outraged the gender politics crowd.)

The political obliviousness and blindness of Poitras, Kennedy and all those who accuse Assange, in one way or another, of “misogyny,” “paranoia” and advancing “conspiracy theories” is simply breathtaking.

The Swedish authorities decided to pursue the allegations against Assange in November 2010, after they had first been raised and dropped by the chief prosecutor in August of that year. “In July 2010,” as we noted on the WSWS in November 2010, “WikiLeaks released 77,000 secret Pentagon documents on the war in Afghanistan, and followed that up in October by making public nearly 400,000 more documents on the Iraq war.” Only a naïf, or someone politically motivated, could fail to see the connection between these exposures and the pseudo-legal attack on Assange.

Risk deals with very little of the actual content of the numerous WikiLeaks revelations (aside from a brief clip from the 2010 release of a classified US military video known as “Collateral Murder”). It has almost nothing to say about the responsibility of the American government and military for the deaths of more than one million people in Iraq alone. US imperialism and its allies have destroyed entire societies and infrastructures, in Afghanistan, Libya, Syria, Yemen and beyond. 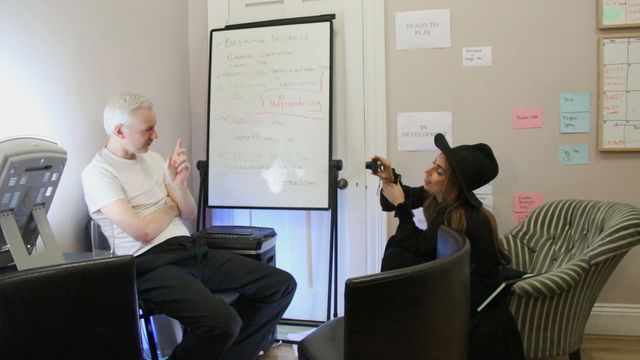 Because WikiLeaks has shed light on these crimes, some of the most powerful and murderous intelligence agencies on the planet have dedicated themselves to incarcerating or eliminating Assange. American officials have publicly called for him to be “killed.”

Confronted with the problems and apparent intellectual obtuseness in Risk, and not only here, one faces the challenge of knowing where to place the blame: on historical ignorance, on intimidation by the powers that be, or on the utter pervasiveness of identity politics in these circles.

The milieu, unhappily, is saturated with subjectivism. Thus, Poitras, in a voiceover, includes entries from her “production journal” in which she describes her dreams and nightmares and muses unhelpfully, for example, “With this film, the lines have become very blurred,” and “This is not the film I thought I was making. I thought I could ignore the contradiction. I thought they were not part of the story. I was so wrong. They’re becoming the story.”

Poitras told an interviewer from public radio station KPCC that Risk “is trying to look at how gender politics play out in the organization [WikiLeaks] and hoping that resonates more broadly, culturally, to address these issues. For me, as a filmmaker, I want to occupy this complexity.”

Assange comes across as a genuinely admirable figure. To his credit, he eschews this sort of self-involvement. When Lady Gaga asks him, “How do you feel?” Assange politely but firmly tells the pop singer, “Who gives a damn what I feel?” In reply to her semi-silly questions about his “favorite food” and such, the WikiLeaks founder observes that he is not “a normal person,” and that he is “obsessed” with the world political situation.

The release of Poitras’ film has become the occasion for large portions of the American media to vent their malicious hatred of Assange, taking for good coin the claims of the Democratic Party and its orbit, for which absolutely no proof has been offered, that WikiLeaks passed on damning information about the Clinton campaign it received from Russian sources.

It is not necessary to cite many of the disgraceful and slanderous comments—a few will give the general idea. Owen Gleiberman in Variety headlines his piece, “In ‘Risk,’ the Radical Chic of Julian Assange Reaches Its Sell-By Date,” and suggests that at certain moments in the documentary, Assange “comes off as the flip side of Donald Trump: a pure creation of media who pretends to care about this or that, when it’s really all about him” and, moreover, is possibly “a pimp of information for Vladimir Putin’s regime.”

Daily Beast, unsurprisingly, claims that “WikiLeaks Founder Julian Assange Is an Egomaniacal, Sexist Creep in ‘Risk,’” while the Atlantic asserts that “Every time Julian Assange appears in Laura Poitras’s new documentary, Risk, there’s a distinct impression of his quiet thrill at being on camera” and that he is “a preening, icy figure throughout the film.”

Fred Kaplan at Slate has a history of venomous attacks on Assange and WikiLeaks. His review of Risk is yet another. Referring at one point to Poitras’ comment that she no longer trusts Assange, Kaplan asks: “But what specifically bred Poitras’ distrust of Assange? The sex charges; the Russia connection; his blooming paranoia; the sense, gleaned from several in Assange’s entourage (we see it on the faces of his lawyers and advisers, as they try to debrief him on his legal and PR troubles) that he’s a narcissistic asshole; all of the above? It isn’t clear.”

He adds: “Long before the 2016 election, then, it should have been clear to anyone with eyes that WikiLeaks—which may once have been dedicated to truth and transparency—had degenerated into a Kremlin tool.”

A. O. Scott of the New York Times too feels obliged to join this right-wing chorus. He asserts that the “pressing empirical questions about Mr. Assange now have to do with the extent and nature of his intervention in the [2016 US] election,” and goes on to note that the “deeper and historical” question haunting him most “goes something like this: What if some of the organizations and individuals [presumably WikiLeaks and Assange] that seemed, not so long ago, to be pushing liberal democracy to live up to its potential were actually contributing to its demise?”

The various critics, wealthy and conservative, hardly make a secret of the fact they perceive Assange to be a disrupter of the social order and political system they hold dear. The most hostile of all are those remnants of the old protest generation, who still perhaps expressed opposition to the Iraq invasion in 2003. What they can never forgive Assange is that, for all his political limitations, he did not fold his tent, like they shamefully did in the mid-2000s, and join the pro-war, pro-imperialist camp.